After a first-round bye, Crimson looks to get past Monmouth on Sunday. 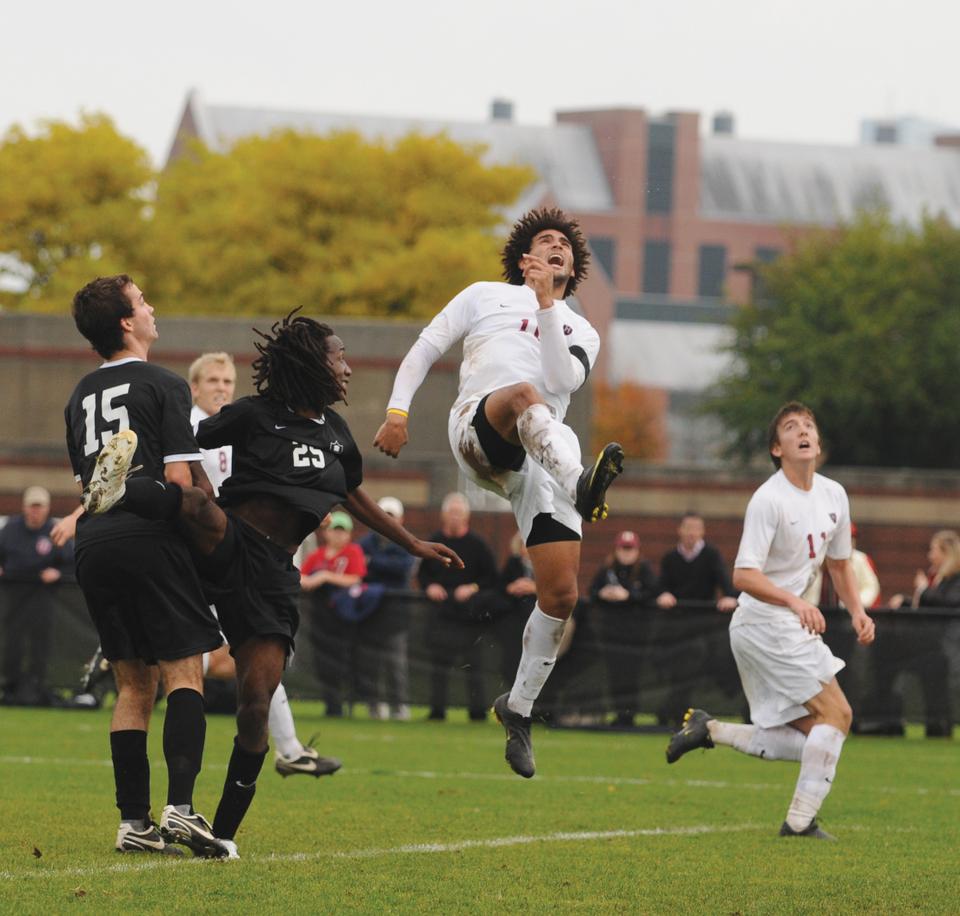 Senior forward Andre Akpan will look to extend his stellar career, as No. 9 Harvard takes on Monmouth in the NCAA Tournament. Akpan, the Ivy League Player of the Year, leads the Crimson with 11 goals.
By Scott A. Sherman, Crimson Staff Writer

Second chances in life are hard to come by. For the Harvard men’s soccer team, that proved true yesterday. And now, a tougher challenge may lie ahead.

After a first round bye in the NCAA Tournament, the No. 9 Crimson will play No. 5 Monmouth University in the round of 32 Sunday afternoon at Ohiri Field. Yesterday, the Muhawks won a thrilling first round game over the University of Connecticut in penalty kicks to set up a date with Harvard. Monmouth’s victory will allow the Crimson to avoid a rematch with the Huskies, to whom it lost 4-0 in its worst defeat of the season on October 14.

“Mentally it might’ve been a tough game to play UConn after they beat us [but] on the flip side it would’ve been a chance for our guys to prove that that was a one-time thing,” Harvard coach Jamie Clark said. “In some ways you want a chance to play a team a second time [but] on other hand you don’t want that mental baggage of a game earlier in the season hanging over you [because] it can provide motivation or worry.”

But playing Monmouth, which went 16-1-1 in the regular season, will not make things any easier on the Crimson. The Muhawks won the Northeast Conference Tournament title and their fifth straight regular season championship this past year. They’ve been ranked in the national top-10 for seven consecutive weeks. And they feature one of the best defenses in the country, leading the nation in shutout percentage—they’ve held 70% of their opponents, including UConn yesterday, scoreless—and rank second in the country in goals against average (0.35 per game) and save percentage (88.9%).

“We’ve played against stingy defenses before, so we kind of know what it’s like to be up against a good D,” co-captain Brian Grimm said. “Besides that, we’re just going to have to be patient and make the best of our opportunities.”

The Crimson’s attack also features the Ivy League Rookie of the Year, Brian Rogers, the team’s second leading scorer with six regular-season goals. Rogers and Akpan will have possibly their toughest challenge of the year going up against the NEC’s defensive player of the year, senior Dan Bostock, and elite goalie Bryan Meredith.

“They’re a tough team to break down,” Clark said. “They work really hard...it’s going to be tough to find the back of the net.”

If Harvard struggles to score on this talented defense, the Crimson’s sophomore goalie Austin Harms and the rest of the defense will need to step up.

“We’ve been playing very well, our training the last few days has been extremely sharp,” Harms said. “I’m excited about the news that we’re playing Monmouth. I think that if we play our game, our big players step up, and everyone else contributes well, we’re going to come out with a win and make it to the next round...I’m feeling very confident.”

Fortunately for Harms, the defense in front of him isn’t too shabby. Senior Kwaku Nyamekye was named to the All-Ivy First Team while freshman Richard Smith made the Second Team. With such standout leaders, Clark believes that his defense can stop the Muhawks before they even take their shots at Harms.

“Our centerbacks will have to deal with crosses [because Monmouth is] very opportunistic,” Clark said. “[But] we should handle them when they step into our box.”

Despite its high ranking, Monmouth did not defeat a single team currently ranked in the NSCAA/Adidas Top 25 during the regular season. Whereas the Crimson was given the 10th seed in the Tournament, the Muhawks went in unseeded because of their easier schedule. But Grimm, who is from Monmouth County, won’t let his team underestimate its weekend opponent.

“They have a lot of talented players, [so] we’ll do our homework to make sure we know as much as we can,” he said.

Yesterday’s win marked Monmouth’s first NCAA Tournament victory in the program’s history. For Harvard, though, the second round will be familiar territory. The Crimson’s season came to an end last year in the round of 32, with a 2-1 defeat to South Florida.

“Last year we played a very good South Florida team, and we kind of learned what it takes to win a second-round game,” Grimm said. “We’re going to try to take that into this year’s game.”

Monmouth and Harvard have never played each other in soccer. If the Crimson is able to win, it would mark the first time since 1987 that the team has reached the sweet 16 of the Tournament.

“Our team knows we’ve played big games this year,” Harms said. “If you don’t win, you’re done. This is where great teams emerge.”