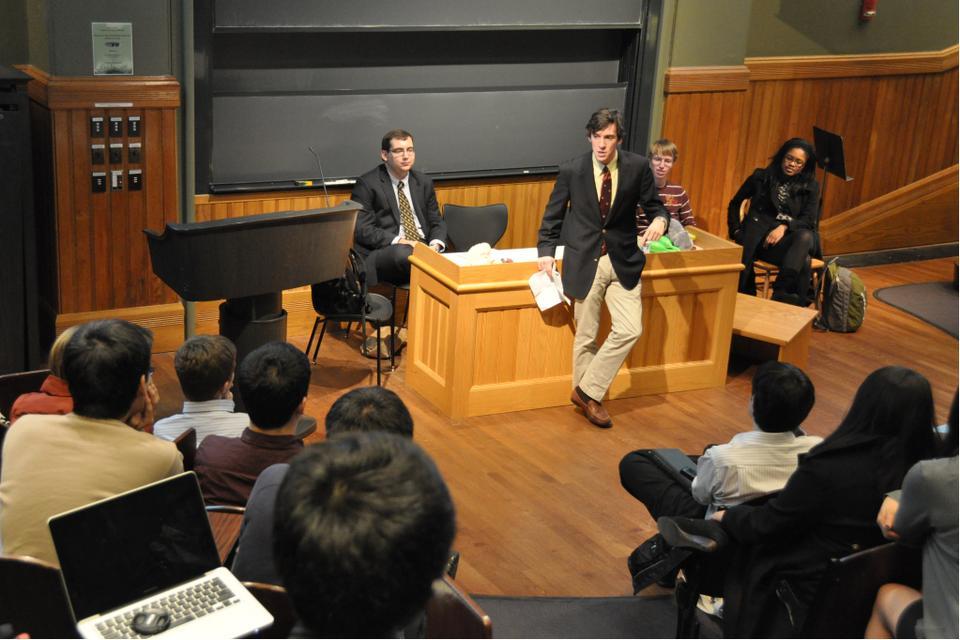 Johnny F. Bowman ‘11 addresses the Undergraduate Council for the first time as its newly inaugurated President after being sworn in at yesterday’s final meeting of the semester. By Melody Y. Hu
By Melody Y. Hu, Crimson Staff Writer

Johnny F. Bowman ’11 and Eric N. Hysen ’11 were sworn in as the new Undergraduate Council President and Vice President last night, nearly three weeks after the results of November’s scandal-riddled elections were re-certified by the Council.

In his first presidential statement to the UC, Bowman—who said he initially had aspirations to become a comedy writer—chronicled his three unsuccessful attempts to “comp” the Harvard Lampoon, a semi-secret Sorrento Square social organization that used to occasionally publish a so-called humor magazine.

“I realized that comedy writing was taking away from what I really loved—the Harvard community,” Bowman said.

Bowman then turned his attention to the ways that he could improve student life by first joining the Student Labor Action Movement and eventually the UC this fall.

UC Vice President Eric N. Hysen ’11 lauded the Council for its numerous recent accomplishments, but he also articulated his hopes for further improving the Council during his tenure.

“It’s time for us to mature as an organization...time for us to move past the petty personal politics that have plagued the UC for too long,” said Hysen, who was absolved of accusations of voting fraud during the controversial presidential elections in November.

In her farewell address, Flores had nothing but praise for the 28th Undergraduate Council.

“[This year’s] Council has finally figured out how to get things done,” Flores said, citing achievements in projects such as UC constitutional reform, room reservations, ad board reform, and ethnic studies.

She also offered her advice to help the Council continue its work.

“I don’t think we will ever be a popular organization, but that does not mean we cannot be an effective organization, one that tries its hardest to do the best for students,” said Flores to the UC. “People may accuse you of being too political, but never let them accuse you of not working hard.”

Kia J. McLeod ’10, who was censured by the Council last week for her involvement in the election scandal, reflected positively on her tenure as Vice President in her speech. She emphasized her continuous “commitment to making the Undergraduate Council more relevant to all aspects of student life,” and her prominent role in the creation of the UC TKTS initiative, which lotteries free event tickets to students.

“I have exhausted my position to its maximum potential,” she said. “I am so thankful for the opportunity to serve students in an official capacity.”

Bowman ended his first meeting as the new UC President, and the last meeting of the semester, with a shake of his green maracas—a gift from Flores that was intended to represent his comparatively relaxed leadership style—and a gleeful “Meeting adjourned!”