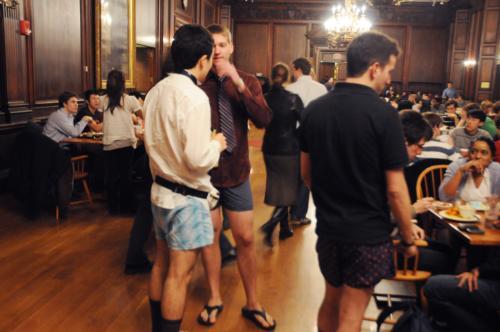 Dimitry A. Doohovsky ’09, who coordinated the event, led the queue in what he said was an opportunity for Eliot House students to bond over turkey meatloaf and grilled pepper steak.

In an e-mail sent over the House list yesterday Doohovsky wrote that “something must be done” about the crowds of non-Eliot diners that frequent the dining hall.

“The pants-lessness is the means by which we bond and proclaim our uniqueness,” Doohvosky said.

But, if the purpose of the night was to discourage non-Eliot residents against eating in the dining hall, then the message was not received by some.

A number of athletes, many who routinely have practice in the athletic facilities across the river until 7:00 p.m., said that they have no choice but to rush to Eliot before the dining halls close at 7:15 p.m..

“We have late practice at the boat house, and Kirkland is strict about inter-house dining, so we like Eliot,” said rower Andrew J. Stein ’12.

Other Eliot House residents remained decidedly clothed among a bevy of their half-naked peers.

“I feel that it is rather unsanitary,” Kyle A. Martin ’11 said, adding that the group is “discriminating against non-Eliot House diners.”

However, Doohvsky maintained that the purpose of the experience is not to discriminate against anyone.

“We are not being hostile to people—we are just being pro-Eliot,” he said. “However, we don’t particularly want people to overrun our dining hall all the time.”­­­­­

HoCo Co-Chair Alejandra Duarte ’10, who also went pants-free, said that she viewed the event as a way for Eliot House residents to proclaim their House spirit.

“We wanted to have a community dinner so we could see who was from Eliot.”

However, the stunt may succeeded in drawing an even larger crowd than usual to the dining hall.

“I came here just to see the pants-less extravaganza,” Yue Han Tang ’10 said. “After this, I am going back to Currier.”

By the end of dinner, nearly half the diners were enjoying their Harvard University Dining Services fawre in their intimates.

“This is a great turnout,” Doohvsky said.