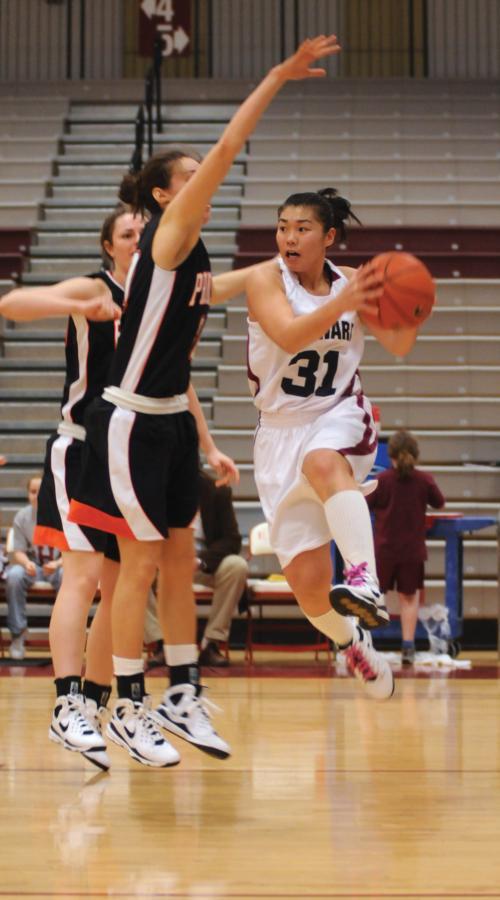 Co-captain Emily Tay served up a performance for the ages Saturday, scoring a career-high 34 points in the win over Yale.
By Alex Sopko, Contributing Writer

Emily Tay is an exception.

During Senior Night at Lavietes Pavilion Saturday night, co-captain Tay proved once again why she is a major factor for the Harvard women’s basketball team (19-8, 11-2 Ivy). In a 91-57 crushing of Ivy-rival Yale, Tay scored a career-high 34 points to finish off her last home game for the Crimson.

The win came only a day after Tay scored 14 points and notched eight assists in a 81-57 victory over Brown. The two games allowed the Crimson to remain in second in the Ivy League standings, and ensured the team of a chance to play for a share of the title.

“This was the Emily Tay that we’ve been trying four years to get,” coach Kathy Delaney-Smith said. “When we lost Nikki—a huge scorer for us—Etay knew she had to step it up.”

Her 20 points at halftime illustrated just how well Tay played. As the first period ran out, she alone had scored three more points than the entire Yale team could manage.

In the opening of the game, Tay nailed the first basket for Harvard, on a reverse layup.

And the shots kept on coming.

Tay followed it up by scoring 10 of the team’s first 12 points, as Harvard jumped out to a very comfortable 12-0 lead.

Tay, who moved into eighth all-time on the Harvard scoring list, was one of three Harvard players to score in double figures.

Besides being perfect from the free-throw line and from outside the perimeter, Tay also shot 15-for-19 from the field. In her 33 minutes of play, Tay also grabbed five rebounds and two assists.

But the 5’8” Tay was not just great on offense, but also on defense.

“Etay’s defense tonight was outstanding,” Delaney-Smith said. “She rebounded really well… she still got to do her crowd-pleasing passes, so we got the best of both worlds. She was positively immense tonight.”

The crowd knew it too. When Delaney-Smith pulled Tay out with a little over four minutes left in the game, a standing ovation erupted from the Harvard fan side, startling the modest Tay.

“I was not anticipating that,” she said. “I’m just pretty happy the team played well. Everyone played, and everyone played their hearts out. This is awesome.”

She may be modest, but Tay is nothing short of a beast when on the court. This season, she has won or tied for the most number of shots per game in eight match-ups. Starting 26 of the season’s 27 games, Tay also grabbed 81 rebounds this season and scored 346 points, second only to sophomore Emma Markley on the team.

It is these extraordinary feats and her positive attitude that, according to her teammates, make Tay such a key part of the squad.

“The seniors do a tremendous job of leading this team,” said freshman point guard Brogan Berry. “As a freshman, I really look up to Etay a lot. She has been a great leader, especially to me. I just look to follow her lead.”

Tay’s leadership does not go unnoticed. Yesterday, Tay became—for the third time this season—the Ivy League Basketball Player of the Week for her outstanding weekend performance in which she shot a combined 71 percent from the field.

“She’s just phenomenal,” co-captain Niki Finelli said. “It’s just a privilege for me to be a teammate of hers and a co-captain with her.”