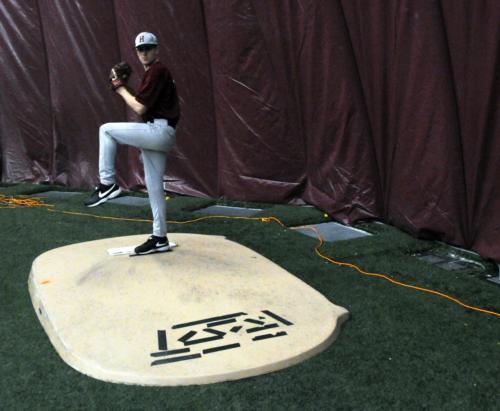 Conner Hulse is the top recruit in a class of potent freshman that is ready to be unleashed on Harvard's Rolfe Division foes.
By Jay M. Cohen, Crimson Staff Writer

Rarely does a freshman enter a season facing as much pressure as Conner Hulse.

The pitcher will slot straight into the starting rotation at the No. 2 spot, behind sophomore ace Max Perlman, and is expected to eat up the innings that were once the domain of Shawn Haviland ’08. In fact, Hulse will literally put on the same jersey—No. 22—that Haviland wore a year ago. Haviland is now beginning his career within the Oakland Athletics organization, while Hulse looks to help the Harvard baseball team forget the disaster that was the 2008 season.

Add the fact that the revamped pitching staff represents the biggest personnel difference in this year’s squad, and Hulse’s right arm could be the key to any success the team is able to achieve in 2009.

Hulse, though, doesn’t seem too worried.

“I’m excited for it,” Hulse says. “I kind of want the pressure.”

This sort of pressure is nothing new to the San Ramon, Ariz., native. He describes how he has played in big games before, rattling off his high school team’s state titles (Horizon was named high school baseball national champions in 2007).

Then, Hulse cracks a joke: “Plus, it’s not like we can do worse than last season.”

When considering all of the comparisons being made between him and Haviland, he is equally relaxed.

“He gives me a hard time about [taking his number],” says Hulse, who has gotten to know the former collegiate star while Haviland has been training at Harvard’s facilities. “He’s a great guy, and hopefully I can develop like he did.”

There is, however, at least one major difference between the two right-handers. Unlike Haviland—whose curveball was his trademark pitch—Hulse’s stuff is all about velocity.

Hulse is the crown jewel in a freshman class that looks capable of contributing right away.

Joining Hulse on the pitching staff will be Jeff Wilsey, Will Keuper, and Jonah Klees—a left-handed sidearmer from Chicago.

And then there’s Marcus Way.

Way was recruited as a pitcher, but when he arrived on campus, he had a very pleasant surprise for the coaching staff.

“He’s a left-handed stick who can hit the ball where the grass doesn’t grow,” Walsh says of Way.

“He’s one of those guys that’s just been swinging so well he’s going to find his way into the lineup,” Perlman adds.

Walsh says that Way has been so impressive in the batter’s box that he could be used as a designated hitter.

Another player who will go two ways is Brent Suter. Suter should see significant time on the mound, as well as in the outfield.

“He may be one of the best athletes I’ve ever recruited,” Walsh says of Suter. “He glides. He’s one of those guys who you watch and you turn to your kid and say, ‘That’s how you play the outfield.’”

“First and foremost I see myself as a pitcher,” Suter says. “[But] I’m hoping to contribute any way I can.”

Versatility is perhaps the most important asset of this year’s freshmen.

In the entire class, nobody embodies that characteristic better than Jeff Reynolds.

“He plays second base, shortstop, third, pitches, plays outfield,” captain Harry Douglas lists. “Coach had him throw a bullpen [session] the other day because he has a really strong arm.”

J.T. Tomes is another freshman that will see action at a variety of positions, with the ability to play in both the outfield and the infield—primarily at second.

But it’s his speed in the field and on the basepaths—Walsh has already identified him as the fastest player on the team—which will allow Tomes to make an immediate impact.

“Tomes and Reynolds will definitely be in there,” senior outfielder Tom Stack-Babich says. “They can do a lot of little things, they both run well, can play multiple positions and look like they understand how to play a particular role in helping a team win.”

From the sound of it, Walsh won’t hesitate to use his rookies.

“If [Suter, Tomes, and Cox] was my outfield this year I’d be turning in a very good outfield,” he says. “I’m anxious to see them.”

Walsh, of course, is not the only one anxious. The freshmen have all heard plenty about the disappointment of 2008 and are chomping at the bit to get the season started.

To see just how integral they could potentially be, this year’s freshmen need look no further than their current sophomore teammates. If it wasn’t for the then-rookies—namely outfielder Dillon O’Neill, infielder Sean O’Hara, and Albright—the team’s 2008 record could have been a lot worse than 10-30.

Now it’s up to Hulse and Co. to prove that, with their presence, the 2009 squad will be much more successful.

“We are ready to get out of the bubble, get playing, and start making things happen,” Tomes says.

—Staff writer Jay M. Cohen can be reached at jaycohen@fas.harvard.edu.