BASEBALL '09: In Third Year, Prince Looks to Become a King 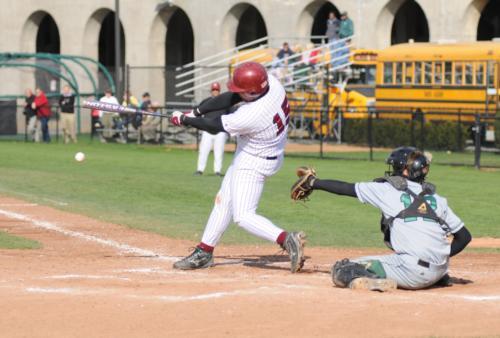 After batting .206 last season, junior Andrew Prince is determined to make more of an impact in 2009.
By Max N. Brondfield, Crimson Staff Writer

Harvard baseball coach Joe Walsh will have some difficult roster decisions to make this spring, especially when it comes to who’s providing pop in the middle of the order.

With strong competition at first base, this power position may create one of the most challenging choices, but junior Andrew Prince is ready to take on the responsibility.

The left-handed Bay Area native—a life-long Giants fan—evokes San Francisco’s most famous slugger as a hulking presence with a little swagger. Still, the junior corner infielder has not made the impact he envisioned after two seasons at Harvard. Following an injury-plagued rookie campaign, Prince struggled to find his stroke and his defensive rhythm last year, leaving the junior disappointed.

“My freshman year I tore a hip flexor and pulled a hamstring, so I was relegated to swinging,” Prince says. “I don’t think I ever really got back into the swing of things defensively my sophomore year.”

Following a 2008 season that saw the Crimson go 10-30—leaving many with a bitter aftertaste—Prince devoted himself tenaciously to sculpting his game, with the hopes of aiding a massive Harvard revival. After spending the summer playing offseason ball in Texas, the junior feels he has made key improvements.

“[Texas] was a good opportunity for me to get out and work defensively,” Prince says. “It also gave me a chance to test out some new things at the plate. I found that when I use the whole field, I can be more consistent than I have been just as a pull hitter.”

The Crimson will be desperate for such consistency—and perhaps some thunder this year—as Harvard batted just .255 in 2008 and will return no player who hit more than two home runs.

With run production looming as a tremendous concern, Prince feels that he is now ready to make the transition into a team leader, as well as a major component of the offense.

“If things are going well I think I could be a power bat for the ball club,” Prince says. “Hopefully getting up with guys on base and driving them in.”

Using his former pull-happy swing, Prince managed a modest .206 batting average as a sophomore. But, as the lefty has focused on “ironing out” his swing, teammates have begun to notice a difference.

“[Prince’s] swing has been looking really good,” Crimson captain Harry Douglas says. “Even when he’s taking swings off a tee, you can see how quick his bat is. He’ll be a nice addition to the lineup.”

Despite such votes of confidence from other members of the squad, Prince faces the reality of significant depth at first base and DH. With tough non-conference games ahead, it remains unclear whether or not he will earn a starting spot by the start of the Ivy League season. But regardless of the competition for playing time, the left-handed slugger reveals a pure love of the game that motivates his constant efforts to improve.

As Prince and all the Crimson veterans recognize, though, there is more at stake for the team than simple enjoyment. While the squad looks to forget a dismal 2008, Prince points to the motivational effect of lingering disappointment.

“I’d venture a guess that [last year was] the toughest season that any of us have been through,” he reflects. “This year’s a lot about going out and competing with a chip on our shoulder, remembering how bad that was and not wanting to do it again. I think guys are hungry and ready to play.”

If the junior hopes to take part in Harvard’s resurgence, he must first answer some critical questions. Prince’s defense remains unproven in Division I competition, and his refined opposite field approach must translate from the cage to the diamond. Not to mention that no one knows if his recently recuperated hip flexor can weather consistent appearances in the lineup. Nonetheless, Prince demonstrates one quality that he hopes will trump any setbacks: determination.

After witnessing his potential when healthy, the junior reveals a single-minded focus to return to form:

“I started out my freshman year very well, and I remember that,” he says. “I’ve tasted [success], and I want to get it back...I know I can contribute like that, and I know I can compete and win like that, so I’m just trying to get [that feeling] back.”

With the season kicking off today against Jacksonville State, the squad will get a sense of the slugger’s status. If Harvard is lucky, it will get the production it so sorely needs.

All Prince is asking for is the chance to prove himself.