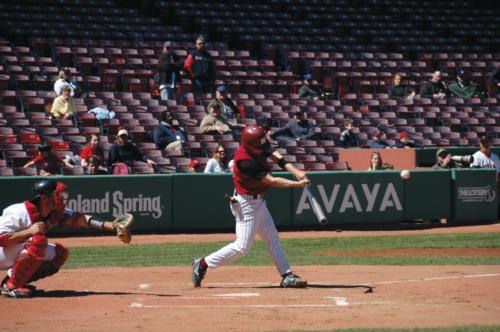 The Harvard baseball team may no longer be the preseason favorite to claim the Ivy title and the top spot in the Red Rolfe Division coming into the 2009 campaign, but this scenario may turn out better than expected.

The Crimson had been named the team to beat in the Ivy League by Baseball America for three years prior to 2008, but each year, the squad failed to live up to the lofty expectations and clinch the crown.

Last season brought no relief, as Harvard posted a dismal 10-30 record after starting the season 1-22. This spring, the Crimson is ready to redeem itself.

“Last year we were pretty complacent, and this year we’ve been working really hard,” captain Harry Douglas says. “We basically learned our lessons from last year, and now we try to move on.”

Last season, Harvard suffered from a heavy barrage of injuries early in the season, and playing one of the most difficult non-conference schedules in the country only added to its early woes. Harvard also failed to answer questions regarding the starting lineup, and the Crimson offense posted mediocre numbers as a result.

This year, the state of the lineup is more clear-cut.

With the benefit of health and consistency, Douglas and senior right fielder Tom Stack-Babich could form an imposing 1-2 punch in the middle of the order. Senior left fielder Matt Rogers—when he’s on—provides an enticing package of power and speed, and senior second baseman Taylor Meehan rounds out the veteran leadership.

Less settled is the situation at first base, where there’s a logjam for the second year in a row. Several players are hoping to establish themselves as viable offensive options and win the starting job.

“I think we’re going to have veterans in the middle of the lineup that have hit, that have hit for average,” Harvard coach Joe Walsh says. “We’ve got a chance to score some runs, which has been our problem.”

The Crimson also has high expectations for a trio of players coming off exceptional rookie seasons. Center fielder Dillon O’Neill, shortstop Sean O’Hara, and catcher Tyler Albright all provide stellar defense at their respective positions, but they’ve also shown that they can handle the bat.

O’Neill fits the bill as a prototypical leadoff hitter, with his ability to hit for average, get on base, and steal. O’Hara and Albright also posted solid averages last season, but will be expected to drive the ball more this year as well.

With the lineup nearly set, and a host of competent freshmen ready to plug any remaining holes, Harvard has reason for measured optimism regarding its offense.

It’s the status of the Crimson’s pitching staff that remains up in the air.

Juniors Eric Eadington and Jonathan Strangio are both out for the season because of Tommy John surgery and shoulder surgery, respectively. Sophomore Greg Malley, who came to the Crimson as a highly-touted recruit but has battled injuries since his arrival, will likely miss another year as well.

And graduation has been even less kind to Harvard’s staff than injury, considering the loss of rotation stalwarts Shawn Haviland ’08 and Brad Unger ’08. The two were the Crimson’s most reliable arms last season, though neither finished with a winning record.

The uncertainties lie further down the depth chart. A trio of sophomores—Dan Berardo, Anthony Nutter, and Zach Hofeld—showed promise last season, despite battling inconsistency, and figure to be in the mix. A crop of able freshmen arms, led by Conner Hulse, will also battle for time on the mound.

“We’ve got our challenges with some injuries,” Walsh says. “But we brought in a lot of freshman pitching just in case. They’ve all shown flashes. I brought them in here to play, and they want to play.”

The Crimson also features lefty Ryan Watson and former Ivy League Rookie of the Year Adam Cole, a pair of senior hurlers looking to go out on a positive note after disappointing careers. Both pitchers have been plagued by control issues in their time at Harvard, but seem committed to exorcising their demons in hopes of turning in a redemptive senior campaign.

“Every once in a while both those guys will start throwing 55-footers and you’re kind of, ‘Well here we go,’ and then—boom!—they’re right back in it,” Walsh says. “That would be a huge key for our pitching staff, if those guys could give us a few innings.”

The Crimson begins with a tough schedule yet again, with its first thirteen games coming down south. The team opens its campaign with a three-game set against Jacksonville State this weekend, followed by four contests against the University of Alabama at Birmingham. Harvard wraps up its road trip with an entire week of play in Louisiana—against Centenary, Louisiana-Monroe, LSU, and New Orleans—before heading back up north.

“A lot of teams like to play schools they can beat, but I like to play teams where...at the end of the season, we can say, ‘Hey, we played against these guys, we know what they’ve got, and we’re better now,’” Walsh says. “It makes sense for us to go play good teams and strong teams and we always want to do that. I’m not worried about the record. I’m worried about getting to be the best ball club we can.”

This season, the Crimson finally hopes to prove why it has been noted as one of the top teams in the Ivies for the past couple of years.

“We’ve tried to move past everything from last year,” Douglas says. “We kind of have to start over completely. We have a completely new attitude.”