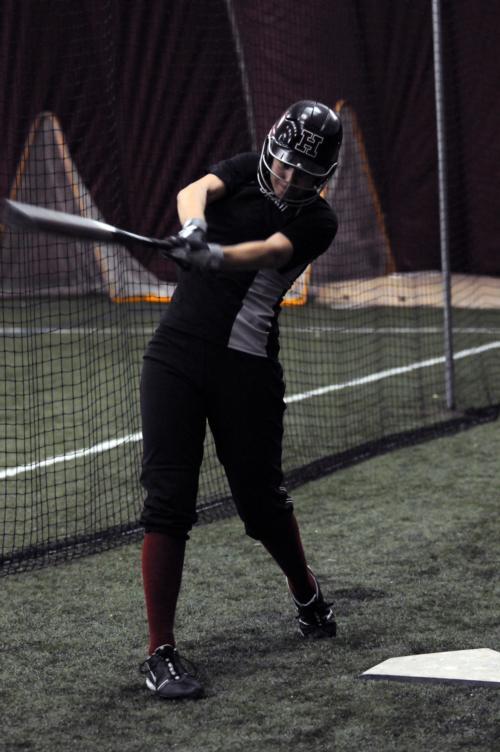 Every class has a set of traits that contributes to the success of a team, but these three hold especially true for the juniors on the Harvard softball team.

“We call them the ‘Schmen,’ because there are seven of them, and it was the first time we’ve had seven in a long time, ” co-captain Bailey Vertovez says. “They all work together really well, and they all do different things, so it helps that they can play off each other in that way.”

Two years ago, the Schmen began their Crimson careers with a dream season. Led that spring by the budding talent of Lauren Murphy, the 2007 Ivy League Rookie of the Year, Harvard captured the Ivy crown by sweeping Penn, 4-0 and 4-2, in the championship series. Ever since then, the Crimson seven has set high expectations for themselves.

The following year, they were back in the championship game, but this time around, Harvard fell to Princeton. This didn’t sit quite well with the Schmen, who are seeking redemption this year.

“I couldn’t be hungrier for [the title],” Murphy says. “Coming into my freshman season, we won the championship, and that was the best feeling in the world. Last year was the worst feeling, losing to Princeton, and we want victory for sure.”

Murphy began her career in the grandest of fashions. Starting at designated player the entire season, she excelled as a slugger. She set the Ivy League home-run record with 18 bombs on the year, led the team with a .350 batting average, and tied the Ivy League single-game homer record with three in the Crimson’s 5-5 effort against Boston College—and all this as a rookie. Her imposing presence instilled caution in opposing pitchers, and led to 16 walks in the final stretch of the season.

Murphy continued her superb play in last year’s campaign. However, 2008 marked a transition year. She started all 46 games, but this time around, she split her time between designated player and first base.

Under the guidance of Danielle Kerper ’08, Murphy trained for her future role in the infield and solidified her role as the starter at first base this year.

“I feel really excited,” Murphy says. “This year I’m going to have more of a leadership role, and that’s something that makes me more of an all-around player.”

Murphy isn’t the only starting infielder among the Schmen. Melissa Schellberg, who is also a Crimson sports editor, enters the season with 89 career starts at third base. She hit .255 and is tied for seventh all-time on the career assist list in the field with 194.

“Melissa is the leader,” Vertovez explains. “She will just take charge.”

Junior Stephanie Krysiak, who is also a Crimson sports editor, and classmate Jennifer Francis are the starting center and right fielders respectively, and add further depth to the Schmen. They provide the Crimson with stability in the outfield and left-handed bats at the plate, while Jessica Pledger, who is also a Crimson photographer, will serve a supporting role to co-captain Hayley Bock behind the plate.

“Stephanie’s vocal, very vocal, on and off the field,” Vertovez says. “Jen Fran is also our quiet workhorse...and Jess Pledger is just the happiest one out of all of them. She can just put a smile on your face.”

Rounding out the junior corps, pitchers Margaux Black and Dana Roberts will provide further depth to the rotation, though Roberts starts the season recovering from offseason surgery and remains a question mark.

“Dana’s a finesse player, so you’ll see her working hard, kind of quiet on the side,” Vertovez says. “Marguax is like our motivator. She’ll encourage people if they’re down and step up when they need her.”

Though each junior has found her niche in the lineup, it’s the septet’s contributions off the field that truly makes the class stand out.

“The junior class, there are a lot of them, and it’s so funny because each of them brings something completely and totally different to the team,” freshman pitcher Rachel Brown adds. “I can’t imagine the team without one of them.”

That special bond they share has generated a winning attitude throughout the team, and it will be essential in the Crimson’s quest for a third straight division title and another Ivy League Championship.

“It’s great,” Vertovez explains. “Hayley and I can leave the program knowing that this class is going to take over and command the respect of the rest of the team.”