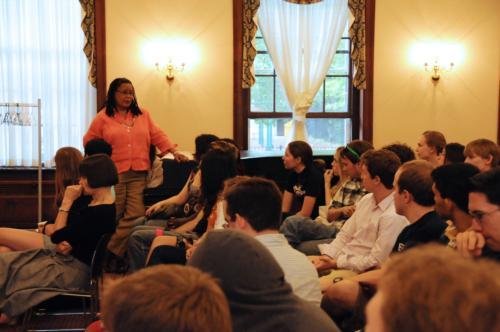 Hammonds began the town hall circuit with low-key, primarily one-on-one meetings in Lamont Café, followed by larger group meetings in Quincy, Cabot, and Mather Houses, where she was joined by other members of the College administration to answer questions and hear students concerns about the changes—part of $77 million in reductions announced by the Faculty of Arts and Sciences Monday.

While administrators called the cuts “a grueling exercise for everyone” and “a shared pain” at the meetings, many students said they disproportionately affected student life and that the process of making cuts had not been transparent.

“This whole process shows a fundamental disconnect between what FAS is doing and what matters to students,” said Adams House Committee Co-Chair Amol K. Jain ’10 during the meeting in Quincy.

Chief among students’ concerns—especially at the Cabot venue—were cutbacks to the current Quad shuttle schedule.

According to the list of reductions published on the FAS Web site, the Sunday through Wednesday shuttle service to the Quad will cease at 1:30 a.m. rather than 3:50 a.m. Shuttle service will also begin at 12:15 p.m. on Saturdays and Sundays, rather than 8 a.m.

Assistant Dean of the College Paul J. McLoughlin said that shuttle service ended at 12:30 a.m. every night before 2004.

In lieu of the shuttle, Hammonds suggested that students rely on rides from the Harvard University Police Department or the evening van services offered by the Passenger Transport Services—which operate until 3 a.m.—though “service reductions will likely take place to this service as well.”

But droves of students—especially Quad residents—expressed concern about the dangers of having to walk from the river to the Quad late at night, especially those who rely on Lamont Library as a late-night study space.

“We care about your safety,” Hammonds said to the Cabot group. “We don’t want to do anything to put you guys at harm walking back. It was our belief that we could make the reductions in the services and it wouldn’t put you in harm.”

When asked what students should do if they need to walk home during a time when neither service is in operation, McLoughlin suggested that students “walk with a friend.”

Students’ other primary concern centered on the elimination of hot breakfast during the week at all Houses.

According to Harvard University Dining Services Executive Director Ted A. Meyer, about 30 percent of students eat breakfast, and the elimination of hot breakfast will save the University $900,000, primarily through the cost of labor.

During the Lamont Café session, members of the Men’s Varsity Swimming and Diving Team said the elimination of hot breakfast would take away a protein- and calorie-filled meal they and other athletes need after morning practices.

Team member C. Andy Krantz ’12 said that the breakfast changes were especially limiting to vegetarians such as himself, who will have to rely on hard boiled eggs and cheese as their only sources of protein after morning practices.

Students at both Quincy and Mather suggested that the College open one river House for hot breakfast each morning to accommodate athletes returning from practices.

In addition to concerns over breakfast and shuttle times, students also expressed concern over cuts in student jobs and rumors of potential cuts in House administrators.

In response to one question about the changes in teaching fellow and teaching assistant hiring, Dean of Undergraduate Education Jay M. Harris said that the College plans to make a current 18 person per section target rate more of an “average” than a “maximum.”

While students at all four venues said that they appreciated Hammonds and the other deans taking the time to speak to students about the cuts, many said they wished they had been notified of the meetings earlier. The e-mail announcing the Town Hall Forums was sent to students at 3:40 p.m., just 20 minutes before the first one began.

Ross P. Ford ’12 was among the students who also chastised the administration for debuting the cuts during reading period, which he said was a “deplorable” time to notify the community.

Hammonds said that she and Dean of the Faculty Michael D. Smith had spent much time over the past few months working on the cuts and wanted to release them before exam period.

In addition, students at all four events said that they felt like their opinions had not been solicited in designing the cuts.

“We don’t feel involved,” said Manny J. Antunes ’11. “Students were caught by surprise. Students hate to see things cut and not feel like they had a say.”

Though Hammonds said that the students did have the chance to voice their opinions on a Web site earlier in the year, she acknowledged that the site “wasn’t well publicized.”

Hammonds said that students now have the chance to apply to be a part of for one of two 16-person College Working Groups, which will consider further changes to undergraduate education and student life.