Ad Board Reforms Presented To Faculty 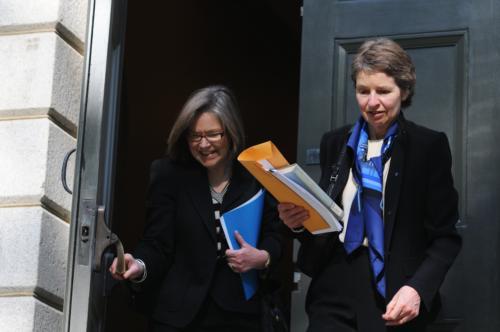 Dean of the College Evelynn M. Hammonds presented a set of recommendations concerning the College’s primary disciplinary body, the Administrative Board, at the Faculty of Arts and Sciences meeting yesterday.

The report, the product of an 18-month review by the College Dean-appointed Administrative Board Review Committee, calls for greater attention to student needs in a process predominantly viewed as intimidating, Hammonds said at the final Faculty meeting of the year.

The Dean’s remarks yesterday were meant to be an introduction to the Ad Board Committee’s findings—the report’s recommendations will require final Faculty approval in the fall,

“Students often do not have confidence in the Board, and faculty do not feel responsible to the Board or connected to the Board—even though the rules it enforces are, in fact, Faculty rules,” said Hammonds, adding that pervasive negative perceptions of the Ad Board challenge its effectiveness.

Instead of requiring at least two-thirds of the full Faculty to vote on a student dismissal, the recommendations call for a small group of professors—separate from the Ad Board—to make the final decision.

“The current practice, in which Faculty members are given only a summary of the case and then asked to vote, does not provide a complete review,” Hammonds said. “[But] distributing large amounts of very confidential case materials among the FAS Faculty is both unworkable and inappropriate.”

Hammonds said she will be appointing additional faculty members to the Ad Board to address the Faculty’s sense of a “lack of ownership” over the disciplinary group. Greater faculty integration into the proceedings would also increase transparency and faculty awareness of Ad Board rules, according to Hammonds.

“I can see all those smiles out there—people who are dying for this job,” she said.

The report also recommends that students appear before a subcommittee of at most three people to ease feelings of intimidation. Currently, students are required to come before a group of at most 20 members of the Ad Board—which includes 31 standing members as well as a number of non-voting guests, and on occasion the University President and FAS Dean.

Students would be allowed to bring into the room personal advisers—typically faculty members or FAS officers—who could suspend proceedings to take students out for a brief break to discuss case materials.

Hammonds, who said she will report to the Faculty on Ad Board proceedings at least two times a year, also emphasized the importance of bringing to light not only instances of students’ “badness,” but also their more “positive aspects.”

“It can be pretty deadening to go to the Board meetings,” Hammonds said. “It would be beneficial for the Board to consider the accomplishments and interests of our students, in addition to this ordinary work, which often involves students who are in distress.”

Professors who stood up to respond to the report—two of whom were former Deans of the College—expressed no disapproval for the committee’s recommendations.

“When Dean Hammonds gives you the call, I hope you will all accept,” said math professor and former Dean of the College Benedict H. Gross ’71 after Hammonds’ presentation. “This is really a part of your responsibility, and I hope you will respond with alacrity.”

—Staff writer Esther I. Yi can be reached at estheryi@fas.harvard.edu.