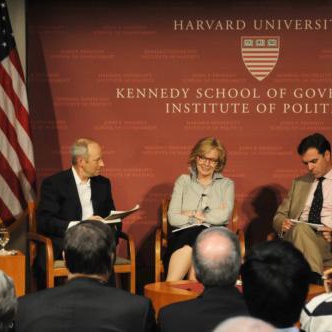 Professor Michael J. Sandel—who teaches the popular Moral Reasoning course on the subject—explained his philosophy about justice as argued in his new book, “Justice: What’s the Right Thing to Do?” at a packed panel discussion with three political experts at the Institute of Politics Forum last night.

Sandel explained the three basic schools of thought behind justice, succinctly represented by the words “Utility”—seeking the greatest happiness for the greatest number of people; “Consent”—respecting the rights and freedoms of individuals; and “Virtue”—promoting virtue through government and law.

Using examples from hotly-debated political issues such as universal healthcare, the Wall Street bailout, and same-sex marriage, Sandel argued that most of society’s debates—though they seem to hinge on questions of maximizing happiness and respecting individual freedoms—are really “debates about what virtues...should government, law, and public policy embody, encourage, and express.”

“Politics and law can’t be neutral to the moral and religious convictions that citizens care about,” Sandel said. “[That would] lead to a kind of emptiness in our politics.”

The discussion then turned to the panelists, who challenged Sandel on various aspects of his philosophy.

Professor Niall C.D. Ferguson said he didn’t think he would “ever be enthusiastic about virtue,” saying that the word had Robespierrian connotations of “sending people to the guillotine.”

Former special assistant to President Ronald Reagan and current Wall Street Journal columnist Peggy E. Noonan commented on the gap between abstract philosophy and practicality in politics. Politicians “have to make decisions in real time, decisions based essentially on practical calculations,” Noonan said. “It’s not abstract for them.”

Harvard Law School Professor Lani Guinier ’71 challenged Sandel to more concretely define the meaning of “virtue,” which she felt did not accurately represent his viewpoints. She also argued that “any commitment to justice has to take into account the historical forces in which people are living.”

Audience members also had their own challenges to Sandel’s ideas in a question-and-answer session.

Rima Merhi, a fellow at the HKS Carr Center for Human Rights Policy, said after the talk that the panel did not spend enough time discussing implementation of justice and the relationship between justice and politics.

“I really feel so many people don’t understand what injustice is. They live in the developed world and write to an American audience,” Merhi said. “They don’t really relate to examples where we really need answers, like in the Middle East and developing countries.”