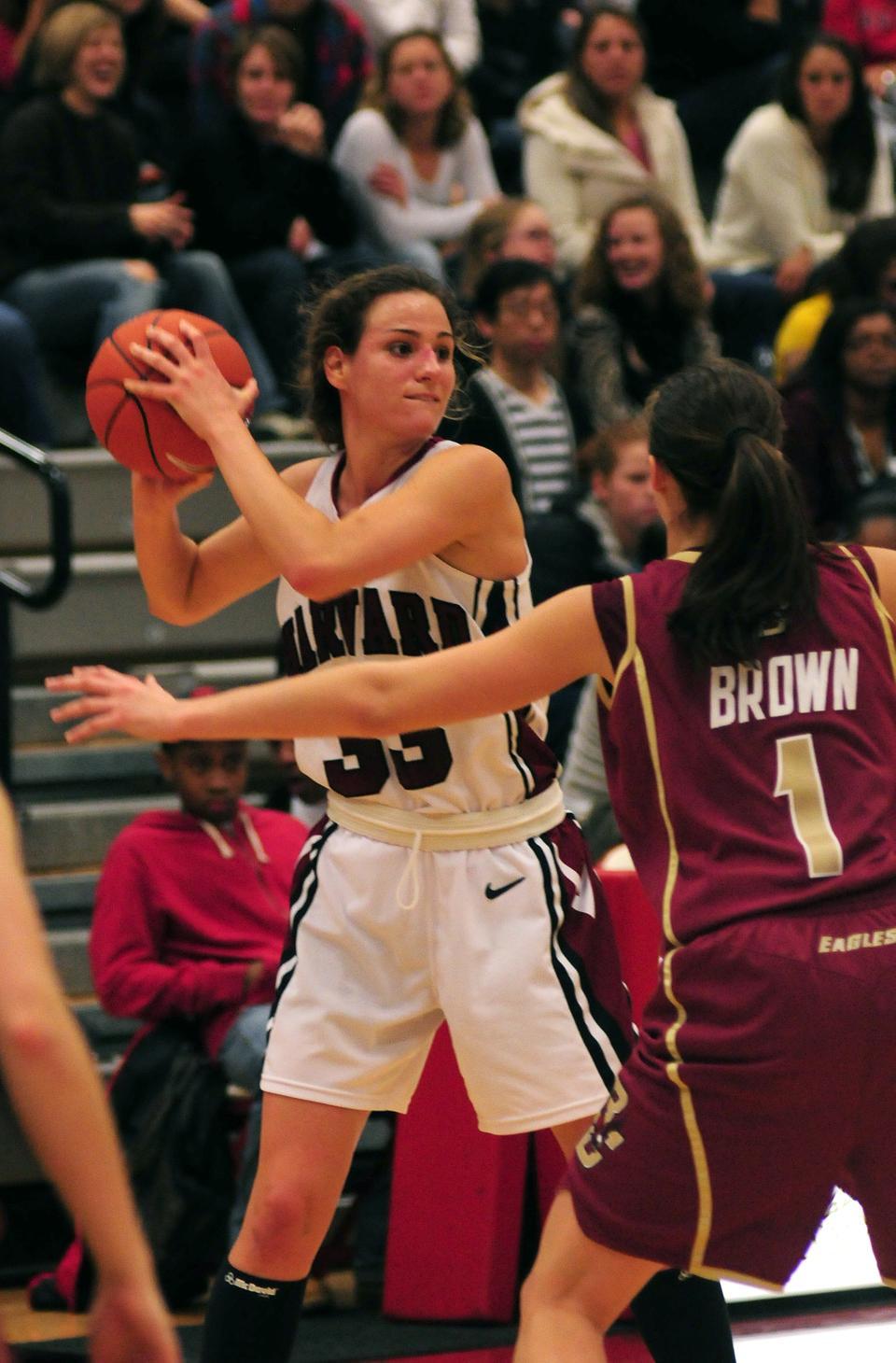 Junior Emma Markley paced the Crimson with 13 points and six rebounds in a 69-53 road win at NJIT.
By Colin Whelehan, Crimson Staff Writer

The Crimson (9-4) squared off with the New Jersey Institute of Technology (5-10) for the first time ever and held off the Highlanders to win its second-consecutive road game, 69-53.

Playing in front of a loud crowd of 1,125 to celebrate NJIT’s Education Day, the Crimson dimmed the opposition right from the tip-off with a 7-0 run to open the contest. The Highlanders were able to close the gap to 11-7, but Harvard used a soul-crushing 17-0 run to bring its lead to 28-7.

NJIT was able to gain a little momentum heading into halftime, outscoring the Crimson, 10-4, to bring the score to 32-17. The 17 points were the fewest Harvard has allowed in a half this season.

“Overall, I’m very, very impressed with our team’s effort this afternoon,” Crimson coach Kathy Delaney-Smith said. “It was an unusual game because of the Education Day and the noon tip-off, but it was a great atmosphere, and I’m proud of the way we started strong.”

The second half was much more competitive, as the Highlanders hit 46% of their shots from the field and also connected on six of seven from three-point range. But Harvard was able to keep pace and shot 59% from the field in the second half en route to the 69-53 final score.

“I think overall we did a pretty god job and played solid defense,” co-captain Claire Wheeler said. They shot too many threes against us, especially in the second half. [NJIT’s Jessica Gerald] had six threes against us, and we definitely need to do a better job of adjusting defensively to who has the hot hand. We’re definitely not going to get away with that against Dartmouth.”

The Crimson entered the game best in the Ivy League in overall scoring, but it certainly had its best defensive effort of the season against the Highlanders. NJIT’s 53 points was the lowest total allowed all season, and Harvard held the Highlanders to 36% from the field overall and added nine blocked shots along with eight steals.

The Crimson was led on the glass by Markley and freshman Miriam Rutzen, who each pulled down six boards to help Harvard hold a 35-27 rebounding advantage.

“We definitely did a nice job stopping them, and we have been working toward [playing better defense],” Delaney-Smith said. “The single area I wish we would’ve done better in was containing their top scorer, who had 20 points.”

After beginning the season with a 0-4 record on the road, Harvard won its second-consecutive game away from home to open its four-game road trip with a 2-0 start.

“I think this is just a case of a young team gaining experience,” Delaney-Smith said. “It was never, ‘You guys played great at home, you’re not playing well on the road.’ There were a lot of other factors that contributed to that, and I think some of those are starting to come together.”

The Crimson will open Ivy League play Saturday at Dartmouth before rounding out its road trip the following Thursday at No. 16 Florida State.

“We definitely have a healthy rivalry with Dartmouth,” Wheeler said. “We actually went as a team to see them play Boston College last week, and I think that between our veterans who remember last year’s game and our freshmen, we’ll come out flying.”

—Staff writer Colin Whelehan can be reached at whelehan@fas.harvard.edu.