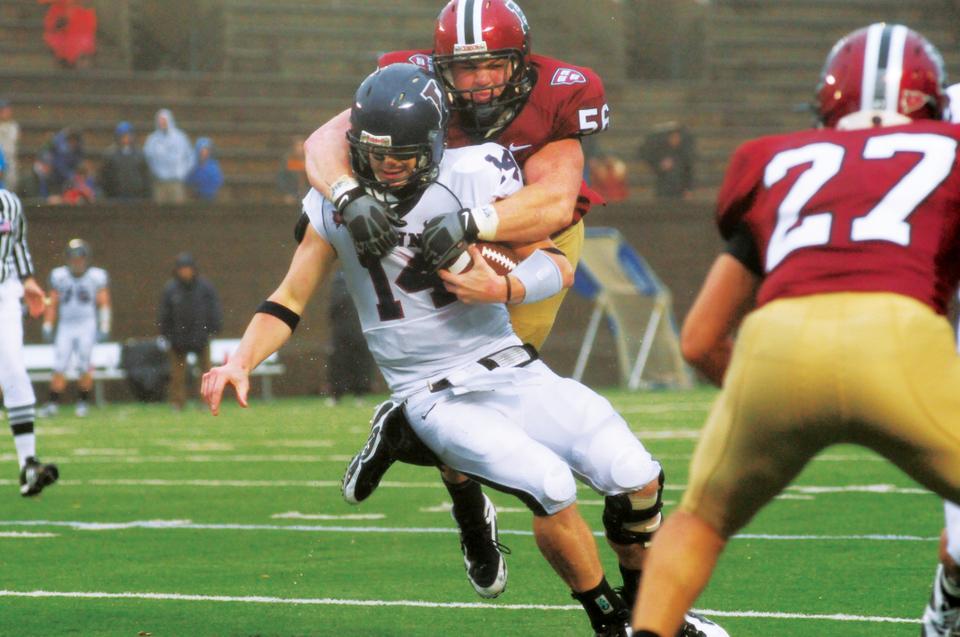 Former football team captain Carl Ehrlich ‘09 takes down the quarterback. Ehrlich, who wore number 56 for the Crimson, has taken his skills overseas where he suits up as a jack-of-all-trades for the Valencia Firebats in Spain’s professional American football league, the Liga Nacional de Futbol Americano (LNFA). Ehrlich is playing offensive and defensive line as well as linebacker.
By Charlie Cabot, Crimson Staff Writer

Chief executive officer, management consultant, and software engineer are at the very top of the list of popular careers for Harvard graduates. On the opposite end, with a total of one graduate, is professional football player for the LNFA.

The LNFA is the Liga Nacional de Futbol Americano, Spain’s American football league, and the one graduate is ’09 Crimson football captain Carl Ehrlich.

Ehrlich, who graduated from Harvard in December 2009, arrived in Spain last Thursday to play for the Valencia Firebats, a professional football team in Valencia.

How did Ehrlich find himself on the Mediterranean gridiron? As he relates on his blog, Ehrlich had little idea in December what lay ahead for him. Minutes after his last exam, however, a recruiter for the Firebats e-mailed him with an offer, and Ehrlich had a solution.

“I always wanted to travel, and I never got to travel with football,” Ehrlich explains. “This was basically a chance to go abroad, and get paid to do it.”

“It came as a shock initially…I thought he was going into consulting,” says senior teammate Cheng Ho. “But I think it was a pretty sweet opportunity to see another culture. It’ll be a lot of fun for him.”

The transition into Spanish lifestyle has been smooth. With about a month between the end of Harvard and his departure for Valencia, Ehrlich had time to refine his Spanish skills, which he last used his freshman year in Spanish Aa.

“The kids on the team have been pleasantly surprised with how much Spanish I speak,” Ehrlich notes.

Ehrlich is making time to see the sights of Valencia, Spain’s third largest city, during his time, and he also devotes some hours to participate in the Spanish custom of siesta.

“Naps are huge here,” Ehrlich says. “On the average day…they work until 2:00 and then everything shuts down.”

On the athletic side, Ehrlich is playing both ways for Valencia, as an offensive guard, defensive lineman, and linebacker.

As one of the three “imports,” or foreigners, allowed on every LNFA team, Ehrlich is expected to excel.

“There’s a clear difference between the imports and the Spanish players,” Ehrlich explains. “The competition [in the LNFA] is not up to Harvard’s level. It’s a much simplified game.”

Football is not played at any Spanish high school, so the Spaniards who play have picked it up just for fun—to play the sport they see on TV.

Most of the Spanish players have day jobs (practices take place at night) and, for them, multi-tasking is a must. Ehrlich relates that the first night he was there, the team sent a man named Paco to fix his bed. Paco, it turned out, was also the Firebats’ starting defensive end.

“He was out in the hall buzz-sawing this random piece of wood…He fixed the bed perfectly,” Ehrlich says. “And I saw him at practice two hours later.”

And as might be expected, American football is nowhere near as popular as in the United States. Games attract only a couple hundred fans.

“When you say football, they think soccer,” Ehrlich explains.

In his first game, a 14-6 victory over the Badalona Dracs on Saturday, Ehrlich was ejected after unintentionally clotheslining a Badalona player.

“It was an accident,” Ehrlich insists. “The refs run a very tight ship around here.”

Ehrlich attempted to say “It’s not my fault” in Spanish but instead said “I don’t understand.”

Ehrlich will be forced to sit out next week’s game.

And, you may wonder, what is a firebat? Ehrlich classifies these mysterious creatures on his blog as “Iberian, heat-seeking, airborne rodent[s].” But the animals carry great meaning in the city as well. Valencia is famous for the festival of Las Falles, or “the fires,” a wild, five-day celebration of St. Joseph. Bats, on the other hand, are a part of Valencia folklore, because, according to Ehrlich, they would fly off and warn the city when an enemy was approaching.

The season ends in June, and Ehrlich may stick around for some time to see Spain and Europe. As for a career in Spanish football, he doesn’t think so.

“Maybe I’ll stay for an extra month,” Ehrlich laughs. “But I’m not ready to commit to being an ex-pat just yet.”

—Staff writer Charlie Cabot can be reached at ccabot@college.harvard.edu.