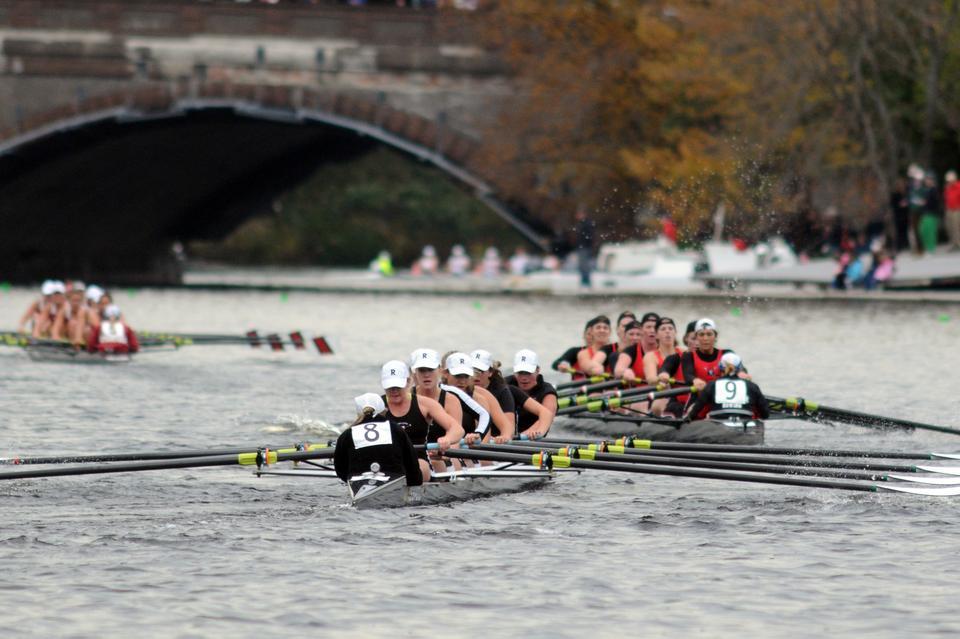 The Radcliffe crew showed the benefits of last year’s rebuilding effort with a solid showing at the Head of the Charles Regatta over the weekend. The heavyweight squad followed up a second-place finish at the Head of the Housatonic with 17th- and 22nd-place finishes for the first and second varsity eight boats in the Championship Eight event, in addition to a fourth-place showing in the Championship Fours. The lightweights fielded two boats in one event.
By Kevin T. Chen, Crimson Staff Writer

Hundreds of thousands of spectators made their way to Cambridge this past weekend to watch the 46th annual Head of the Charles Regatta.

In what has become one of the largest rowing events in the world, both the Radcliffe heavyweight and lightweight crews failed to disappoint on their home course. In particular, the 1V boat for the lightweights turned in an impressive third-place finish in the lightweight eights event, while the priority boat for the heavyweights–the fours–finished fourth in a race that featured over 20 boats.

“It’s always an exciting time to be in Cambridge and the Charles with members of the rowing world,” sophomore coxswain Andrea Rickey said.

Radcliffe fielded four boats–three eights and one four–for competition, enabling all members of the heavyweight team to row in the regatta.

In its first event on Saturday afternoon, the Black and White took an eighth-place ranking in the Club Eight event with a time of 18:43.437. Fordham, UConn, and Yale were the only collegiate crews to finish above Radcliffe.

Yesterday, the Black and White took the water once again for its priority event–the Championship Four. Led by sophomores Celia Kohl and Shelley Pearson as well as co-captain Olivia Coffey and junior Liz Soutter, Radcliffe completed the course in a time of 18:00.008. After initially facing interference from other crews on the course, the Black and White settled down and paced its way to a fourth-place finish. Cornell took first in the event with a 17:48.071 finish.

Radcliffe finished the day by fielding two boats for the women’s Championship Eight, traditionally the priority event for the heavyweights in the spring season. The two boats–the 1V and 2V–completed the course in times of 16:54.651 and 17:12.115, garnering 17th- and 22nd-place finishes, respectively.

“We placed in the middle of the pack, and while it wasn’t quite exactly where we wanted to be, it was still a strong effort,” Rickey said. “The Championship Eight is the most competitive event, but [there are] no excuses. We just have to go out to practice on Wednesday and get after it.”

As the heavyweights prepare for the upcoming Foot of the Charles regatta and the spring season, the rowers will look to improve from their performance in this weekend’s regatta.

“We know that the [Head of the Charles] isn’t the be-all, end-all of the season, but we still want to get stronger as we head into the spring. All in all, [yesterday] was very much a learning day, becoming aware of the things that we need to change and the things we did well and how to bring those things together.”

Despite fielding only two boats and participating in just one event–the Lightweight Eight–the Black and White lightweight crew fared just as well as its heavyweight counterpart.

After a successful dual season last spring in which every boat medaled at Eastern Sprints, Radcliffe picked up where it left off, dominating its competition in the Lightweight Eight event. With times of 16:33.524 and 17:13.904, the 1V and 2V boats took home third- and seventh-place finishes, respectively.

“Both boats had really great races,” co-captain Natalie Wong said. “We felt like we were really aggressive at the start, and we were able to hold that up during the race.”

Even though the weather was at times rainy and cloudy, the rowers had favorable rowing conditions, facing little headwinds and benefiting from the flat water.

“This was one of the fastest Head of the Charles races I’ve ever been in,” Wong said. “The water was perfect. It was amazing conditions to row in, and it definitely helped us to row fast.”

Traditional powerhouse Wisconsin led all boats with a time of 16:06.102, while Radcliffe rival Princeton finished as the runner-up in the event.

“In the [1V] boat, we kept going back and forth with Princeton, trying to pass them on the course,” Wong said.

Though the Black and White fell short in attempting to pass the Tigers, the regatta provided the rowers with a first glimpse at its competition for the upcoming spring season.

“The Head of the Charles is a great race, because it’s the first race of the season where we really see our competition and compare ourselves against those top teams,” Wong said.