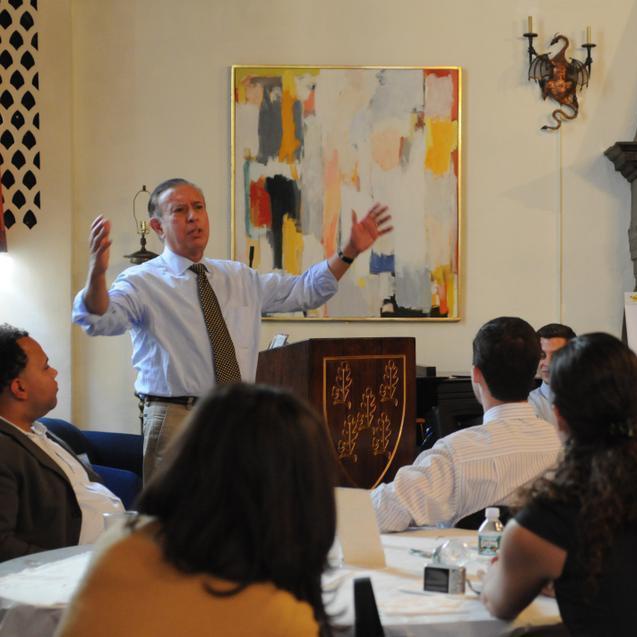 The conference titled “A Community of Experiences,” which started on Friday evening and concluded yesterday morning, brought together current and past members of the Cuban-American Undergraduate Students Association at Harvard, to “foster new avenues for service,” according to a press release.

Alumni of both the College and CAUSA, including Harvard Alumni Association President Emeritus Teresita Alvarez-Bjelland ’76 and In-House Council at Huneeus Vinters LLC Suzanne M. Besu ’01, spoke, sharing stories of their past experiences at the College and how they have given back to the community.

“The highlight of the conference, for me, was seeing how much it meant to all of the attendees to be able to return to Harvard by means of a theme which they are all passionate about, service and their culture,” said Daniel Balmori ’11, co-president of CAUSA.

Among the speakers were two of CAUSA’s founders, Cesar Conde ’95 and Carlos A. Zumpano ’96, who started the association in 1994.

Conde and Zumpano shared their story about the organization’s origins, emphasizing that it arose out of concern for deteriorating political situations in Cuba.

Zumpano explained that the two founding goals of CAUSA were to promote Cuban culture and a free and democratic Cuba through a network of students.

Alexander J. Diaz ’14, who attended the conference, said he appreciated this network.

“CAUSA is about the family,” said Diaz. “Leaving home [the family] is the first thing you look for, and CAUSA has provided that with open arms.”

The event also featured Harvard faculty, including Professor of Mexican and Latin American Politics and Economics, Jorge I. Dominguez. Dominguez, who has taught Societies of the World 15: “The Cuban Revolution, 1956-1971: A Self-Debate,” spoke to his work as a scholar in a question-and-answer session.

“The main reason I do the work I do is to figure out how to establish democracy in Cuba that is self-sustaining,” said Dominguez in front of an audience of about forty students and alumni.

Current and past CAUSA members said they hoped this would be the first in a long line of alumni conferences.

“I’m impressed by this event. It demonstrates how far the organization has developed,” said Zumpano. “If this is a sign of the future, [the organization] will be successful.”