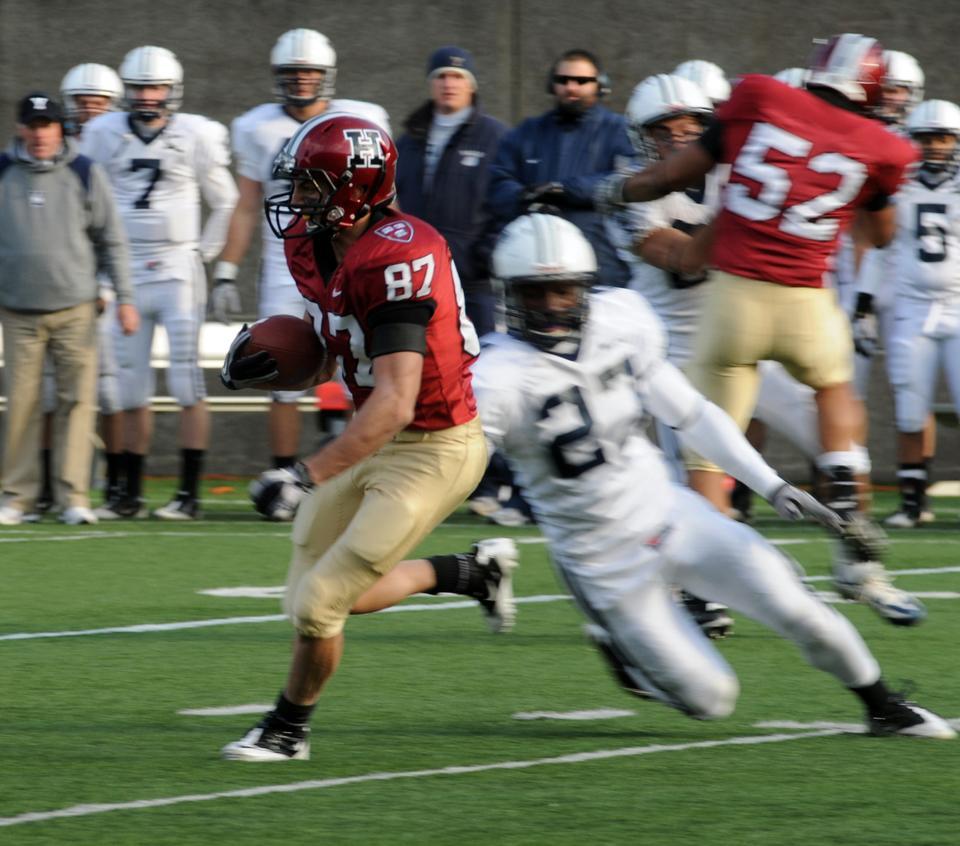 Senior Marco Iannuzzi, who had missed the last six games with a broken clavicle, returned for his final game and scored a kick return TD.
By Christina C. Mcclintock, Crimson Staff Writer

In his final game in a Crimson uniform, Harvard wide receiver Marco Iannuzzi showed his team exactly what it had been missing since he was sidelined by a broken collarbone.

Every time the Crimson needed a big play, Iannuzzi was there. Down 7-0 in the first quarter, Harvard was struggling to find its offensive rhythm in a frame dominated by the Yale rushing game. Then junior quarterback Collier Winters connected with Iannuzzi to bring the Crimson to the Bulldogs’ five-yard line. Harvard had faked out its opponents at the line of scrimmage with a flea-flicker play between Winters and junior receiver Adam Chrissis. The trick play was not enough to distract Yale’s secondary, but the Bulldogs’ triple coverage couldn’t keep Iannuzzi out of the red zone.

Before long, the Crimson had evened the score.

When a Yale-dominated second quarter sent Harvard into halftime with another seven-point deficit, it was again Iannuzzi who righted the ship.

After receiving Bulldog sophomore Philippe Panico’s kickoff at the 16-yard line, the receiver followed his blockers to the right side of the field before cutting back across to the left and bursting through an open lane. In front of a legion of Crimson fans, Iannuzzi sprinted alone into the endzone to even the score.

“It’s just like we drew up,” he said. “It was kind of a wash play, we all headed to the right and headed up for about 10 or so yards, and then we break that back left. And from there all I saw was just red jerseys, one kickout block, and I just saw the corner pylon and just went for it.”

After Iannuzzi brought the score to 14-all, Harvard would go on to score 14 more points before Yale finally found the endzone at the end of the game.

The play marked the second time Iannuzzi returned a kickoff for a touchdown this season. No Crimson player had reached the endzone on a kickoff return since 2006.

“He is the epitome of a difference-maker,” Harvard coach Tim Murphy said of Iannuzzi. “They’re hard to find, and he made a big difference today.”

Coming into the game ranked second in the conference in rushing defense and third in sacks, the Crimson’s defensive line is arguably its most effective unit.

But for the entire first half of Saturday’s contest, the group looked more docile than dangerous.

Instead, the Bulldogs’ offensive line dominated the line of scrimmage, paving the way for its running backs to rush for 102 yards in the first half as compared to the Crimson’s 15.

But after halftime, Harvard was back to its dominant self. In the third quarter, senior defensive tackle Josué Ortiz led the charge with a sack and a blocked punt, while in the fourth quarter, it was senior defensive end Ryan Burkhead’s time to shine.

Burkhead finished the quarter, and the game, with 2.5 sacks for a net loss of 20 yards to go along with the eight tackles he posted on Saturday.

“During halftime, [defensive line coach Carlton] Hall came up to us, and it wasn’t a really fiery speech or anything, but he said we have to find something inside ourselves if we’re going to come back and win this game,” Burkhead said. “And that was really moving. I think everybody on the team really took it to heart. On the D-line, all year we’ve been persistent, fighting to get to the quarterback, and we wanted to win this game so bad. And really, I think that’s what made the difference in the end.”

Diametrically opposed for most of the game, the two schools came together in terrified unity when a collision between Crimson senior running back Gino Gordon and Yale senior outside linebacker Jesse Reising left both players on the ground unable to get up.

Gordon was ultimately able to walk himself off the field, but Reising needed to be carted off to the emergency room in a stretcher. Bulldog coach Tom Williams later said that the measures were precautionary and that Reising is expected to be fine.

“Jesse is one of my close friends, and I never want to see something like that happen to my friend,” said Yale junior linebacker Jordan Haynes. “I’m glad to hear that Coach Williams said he was doing better. We just tried to rally around that and play for Jesse, but unfortunately it didn’t go our way.”