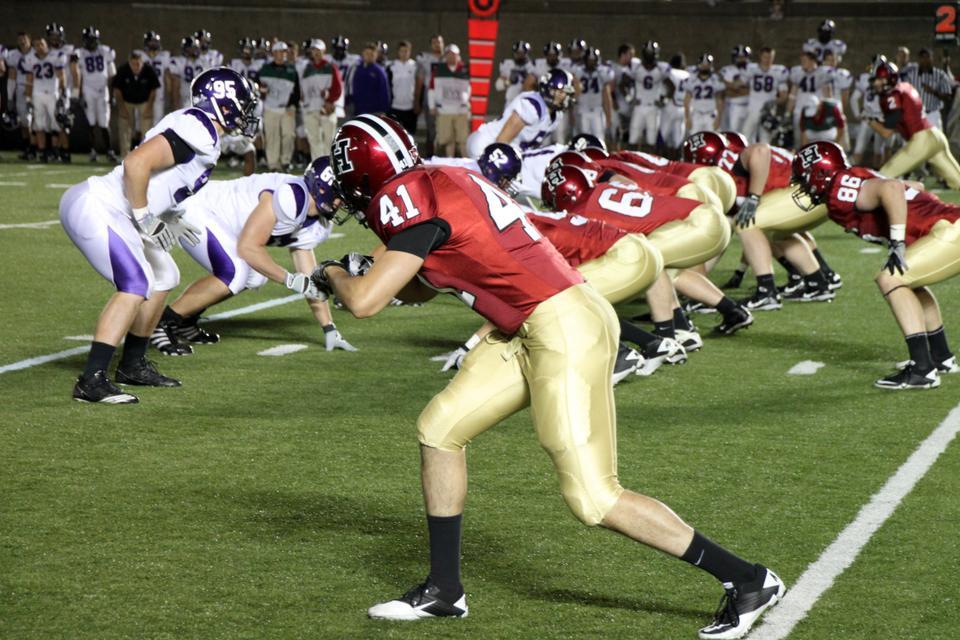 Senior Zar Zavala, a wide receiver on the football team, was informed after Harvard-Yale that he had been selected as a Rhodes Scholar. A native of El Paso, Texas, Zavala is a joint concentrator in engineering and neurobiology and saw playing time this season for the first time in his career.
By Kate Leist, Crimson Staff Writer

Any athlete will always remember the last game they played, and for a Harvard football player, going out with The Game provides a particularly memorable backdrop.

For senior Zar Zavala, it would have been hard to top his first three Harvard-Yale weekends, all of which involved rings—championship rings in his freshman and sophomore seasons, and an engagement ring for his now-fiancée, Melanie, last year.

There was no ring to be won this fall. But on top of his class’ perfect 4-0 record against the Bulldogs, Zavala earned a different kind of prize: a Rhodes Scholarship.

“I’m walking down the field, searching for my family,” Zavala says of the moments after the Nov. 20 win. “I’m finding everyone I’ve known for the past four years except for my fiancée. I finally find her, she hands me my phone...and there was a text: ‘Congratulations, you’re a Rhodes Scholar.’”

“The whole team was around me—they were more anxious than I was,” he continues. “I told them yes, and pandemonium broke out. It was insane.”

For the El Paso, Texas native, winning the Rhodes Scholarship represented the culmination of four years of hard work in the classroom.

Zavala is pursuing a joint concentration in engineering and neurobiology and was elected to the Phi Beta Kappa Society earlier this month.

But the accomplishment is even more impressive when you consider the work that Zavala—a wideout who walked onto the team—put in on the gridiron.

During his senior year at Eastwood High School, Zavala endured a pair of surgeries that left him wondering whether it was worth trying to walk on to an Ivy League team, a goal he’d had since middle school.

“I was talking to my mom, and she was like, ‘What do you mean you’re not going to play football anymore? You love football,’” Zavala recalls. “And I was like, ‘Oh, I know, but it will be really hard.’ And she [said], ‘That is not a good enough reason,’...So I started training that summer and slowly got back into shape and then walked on, but it was tough.”

The wideout earned a place on the team as a freshman and will graduate as one of two walk-ons to make it through four years on the team, along with his roommate, defensive tackle Dan Driscoll.

“I think we both agree that the reason that we’re still on the team, and the reason we were able to finish, is because we had each other,” Driscoll says. “It’s a very unique experience to walk on a team, and I’m very grateful to Zar for all the support he’s given me for the last four years. It’s really bonded us.”

Zavala made an immediate impression on the coaching staff for his attitude and work ethic.

“[Right away], you realize just from a character standpoint how tremendous he is,” says wide receiver coach Evan Loring, who has worked with Zavala for the last two seasons. “I didn’t know how good of a football player he was yet at that point, but from the first time I met Zar, I saw something special in the kid.”

Though the senior never found glory on the field with the varsity team—he saw playing time in three games this season, his first varsity appearances—his role in the wide receiving corps, where he spent most of his time on the scout team, was still invaluable.

“We started to learn a lot of new stuff here when I got here,” Loring says. “Zar would pick up the teaching faster than any of the other kids, any of the kids who were better than him physically, who were stronger than him...So all of a sudden, you see Zar out there against [junior cornerback] Matt Hanson, some of the other starters, and he’s using the new technique better than the older guys.”

“It really set an example for the kids who are going to be playing in the Harvard-Yale game and all the big games from the standpoint of seeing it on film first,” he adds.

And for Zavala’s part, he credits football with teaching him some important lessons.

“As a walk-on, you start off significantly behind everybody else, and it’s really embarrassing,” he says. “You get beat, day in and day out, and it’s tiring on your mind, tiring on your body, and that’s all freshman year. So I think the fact that I was able to stick with it and get better enough to where it got fun to be at practice was really the reason why I was able to stay.”

That perseverance helped Zavala navigate a challenging fall in which he had to balance football, work on his senior thesis, and scholarship applications. After being encouraged to consider the Rhodes by both his freshman proctor and his Kirkland tutors, Zavala took their advice and went for it.

“[A tutor] said, ‘You are an ideal candidate. You definitely, definitely owe it to yourself to apply,’” he says. “And throughout the whole process, I was really thinking, ‘I’m not losing at all by applying to this.’ So it was never ‘if I don’t get it, I wasted my time.’ It was always, ‘I’m learning a lot about myself and about how to apply for competitive things throughout it.’”

By the time the football season ended, Zavala had the Rhodes in hand—and was also named a Marshall Scholar, which he turned down.

But the wideout acknowledges that the individual honor was made possible by his team.

“I can’t even describe what it was like,” he says of his teammates’ support. “Everyone knew I was applying...and they knew I was going to get it. They had more faith in me than I did...To hear from them, just constantly, from the coaches and from the players, saying ‘We know you’re going to get it,’ that was extremely important.”

And his teammates were there every step of the way—including in celebration.

“When he found out about the Rhodes, the fact that the kids who were all of our starters and our players wanted to go and run up to him and congratulate him on that achievement—more so than probably even celebrating the win over Yale—was just a testament to how much the kids really love him, how much they care about him and appreciate him on the team,” Loring says.

With the book closed on his football career, Zavala can focus on new adventures—completing his thesis, his June wedding, and the next two years in England, where he plans to study clinical neurology with the ultimate goal of becoming a neurosurgeon.

But even if his name didn’t appear on many stat sheets, Zavala has left a lasting imprint on the Harvard program.