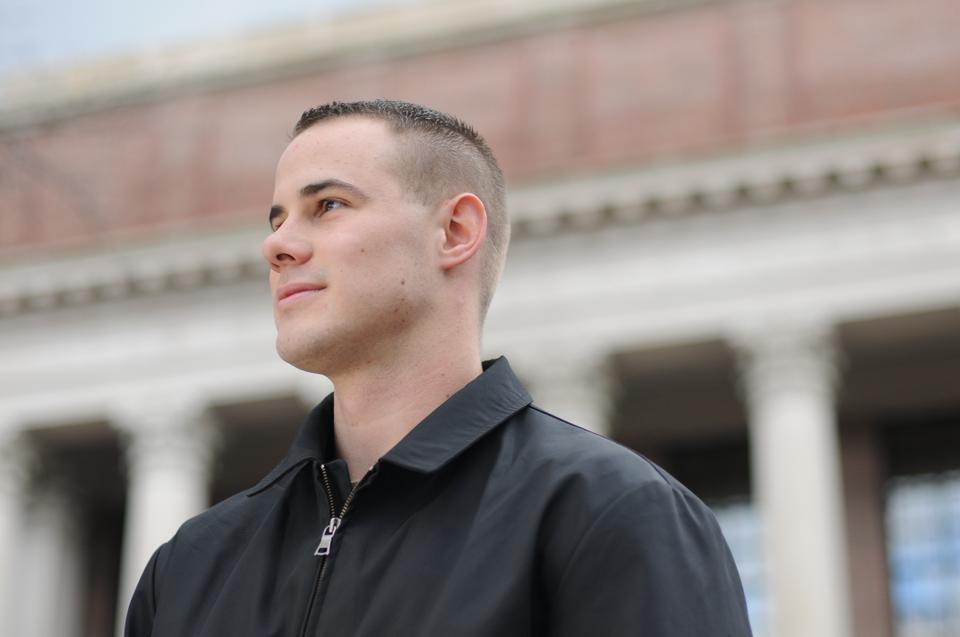 An atypical Harvard freshman, Marine Corps veteran Taylor B. Evans ’14 lives off-campus with his wife and daughter and must fulfill military obligations in addition to attending class and completing homework. By Meredith H. Keffer
By Justin C. Worland, Contributing Writer

Built a bit like a star high school football player, Taylor B. Evans '14 looks the part of a Marine. While he wears t-shirts and jeans even in the roughest of weather, on occasion the casual attire gives way to a green Marine Corps service uniform—the seams and cuts fit exactly over his broad shoulders and powerful arms. Evans looks like he could storm a beach at a moments notice, or maybe like he was born in uniform.

But for this five-year Marine Corps veteran, combat is a distant possibility. This semester, Evans, 23, enrolled at the College as a freshman.

Most of his fellow classmates arrived from America’s cities, suburbs, and prep-schools nervous about making friends, fitting in, and doing well. Evans arrived with a tour of duty under his belt, a wife, and a recently born daughter, Haley.

With his years in the Marine Corps, Evans is far from the typical freshman. Serious and intent—and with a family of his own to boot—Evans stands above and outside the community of students of which he is ostensibly a member.

Evans approaches his college experience with the same goals and expectations that he approaches the rest of his life—ultimately, he hopes to serve and contribute to society.

But these experiences also disconnect him from his fellow students, many of whom see military service as either a largely foreign concept or a rarely-considered option for the future.

Still, at a time when the University has garnered criticism for its alleged opposition to the military and what it represents, Evans’ experience also allows him to reconsider what it means for Harvard to produce individuals with a commitment to public service.

A SOLDIER AT HARVARD

A day in Evans’ life is unlike that of most other Harvard freshmen. As the last students shuffle out of Lamont Library at 4:45 a.m. on Monday, Evans starts his day,

He begins by driving from his apartment on the border of Cambridge and Belmont to Boston University, where he leads a Reserve Officer Training Corps unit in physical training. At 7 a.m. he returns home for a rest before taking the bus back to Harvard for a full day of classes that runs from 10 a.m. to 3 p.m. While his evening schedule varies, he generally spends some time fulfilling ROTC obligations at MIT.

Evans passes much of his time during the week like other College students—reading and working on problem sets. But unlike other students, this often comes at the detriment of his spending time with his wife and daughter.

“He’s mastered having the book in one hand and the baby in the other,” says his wife, Stephanie Evans.

While Evans interacts with the other freshmen in his classes and occasionally participates in activities held for his Massachusetts Hall entryway, his contact with the rest of the student body has been limited. And a busy college schedule and the demands of caring for a small child limits the couple’s ability to meet people and make friends.

While raising a child may be tough, the couple says that for a military family they are extremely fortunate.

“Harvard was and remains the punch line of a joke,” Evans says, referring to the University’s perception among his military counterparts. Still, his experiences convince him that their idea of the school does not quite ring true.

As it was for so many others, Harvard had been little more than a fantasy for Evans before his acceptance. Prior to his arrival as a student, he was not sure exactly what to expect.

“I was told Harvard is an anti-military school, that I wouldn’t have anything in common with the people here,” Evans says of what he sees as one of the larger misconceptions people have of Harvard.

But the idea that Harvard harbors strong dislike for or resentment toward the military is not the case, Evans says.

From what he has seen, Evans says this view of Harvard is false. Administrators such as Dean of Freshmen Thomas A. Dingman ’67 and Evans’ Resident Dean enthusiastically reached out to offer him any additional support he may have needed as he transitioned to the College.

Students have reacted to his story more with interest and awe than with disdain or derision and have shown interest in learning more about his life and experiences, Evans says.

As someone whose career is dedicated to service, Evans says he has been impressed by his classmates’ own desire to do the same.

Despite students’ eagerness to serve, he says that he still wishes more of them would consider serving in the military.

“Harvard has the best and strongest minds. It would be a tragedy not to use that talent in pursuit of [defending America and its values],” he said.

Despite his desire to see more Harvard students in the military, Evans says he understands the reasons why students opt to serve elsewhere.

“People at Harvard are accustomed to freedom,” Evans says. “Going from the exploration and freedom you have here to the lifestyle of the military would be like a car crash.”

A FRESHMAN WITH A FAMILY

When first year students arrive in the fall, many are still wide-eyed kids, nervous, and a bit scared about what their college careers have in store for them—a set of concerns slightly removed from Evans.

“I came in with a much clearer understanding of the world,” says Evans, comparing his perspective to those of his classmates. As a reminder of the disparity between Evans and his fellow freshmen, he often slips and refers to them as “kids.”

But with a child of his own, maybe that is not surprising. Two and a half years into his time in Korea, the couple’s daughter, Haley, was born in March of 2010.

Evans and Stephanie met as high school students in Abu Dhabi and serendipitously reunited in 2007 while Stephanie was a student at the University of Southern California in Los Angeles. Evans was stationed just up the California coast at the Defense Language Institute in Monterey where he studied to become a cryptologic Korean linguist, a job that includes analyzing reports in Korean.

The couple spent weekends on the coast between Monterey and Los Angeles. They married in 2007, shortly before departing for Korea, where Evans spent his first tour.

In 2009, Evans was selected for the Marine Enlisted Commissioning Education Program, which provides approximately 90 Marines each year with the opportunity to take time off from regular service and attend a college of their choice. Marines that participate in the program are required to remain in the Corps for at least four years after graduation.

So with a baby on the way and a wife on his arm, Evans applied and was—to his surprise—admitted to Harvard.

While the couple also considered Georgetown and Notre Dame, Harvard’s allure and financial aid package proved too good to turn down.

Stephanie had been accepted to several law schools, but that was before her daughter’s birth and her husband’s acceptance at Harvard. While she has put her plans to attend law school on hold to take care of her daughter, she says she plans to enroll in law school somewhere in the Boston area while Evans is at Harvard.

AROUND THE WORLD AND BACK

While visiting Cairo as a high school student, Evans was approached on a street corner by two children begging for money.

Around the corner, Evans could see the man for whom they worked and who probably abused them. Evans could not decide whether helping the children was worth lining the pockets of their abuser.

“I can’t help but think about what it is like to live an existence like that,” Evans says. “Maybe now I can understand a little bit of the violence that occurs.”

Evans spent his childhood moving from place to place around the world, an experience that informed his understanding of the United States. As a child with a father in the Air Force, Evans lived in four states and three foreign countries but describes his time in the United Arab Emirates as especially influential on his world-view.

He moved to the Middle Eastern nation after starting high school in what he describes as “a very Christian oriented, family-focused Colorado town.”

“There are truths to some things that you hear, but there are also many falsehoods,” Evans says in reference to the American perception of the Middle East.

After living in such a radically different environment, Evans returned to Colorado with a more open view of the world, a view that he says did not necessarily align with the culture he had left behind in the United States.

“These conservative Christian truths that I had never questioned before, I all of the sudden could not let stand,” Evans says.

But the time spent overseas also resulted in a stronger appreciation of America and the values it espouses, which inspired him to consider a career in the military.

“The ideas of justice and equality have so much more meaning to me because of what I’ve seen,” he says. “The spirit of the military is in the noble defense of the values that America thinks are important, that are good for all of humanity. That’s the military at heart.”