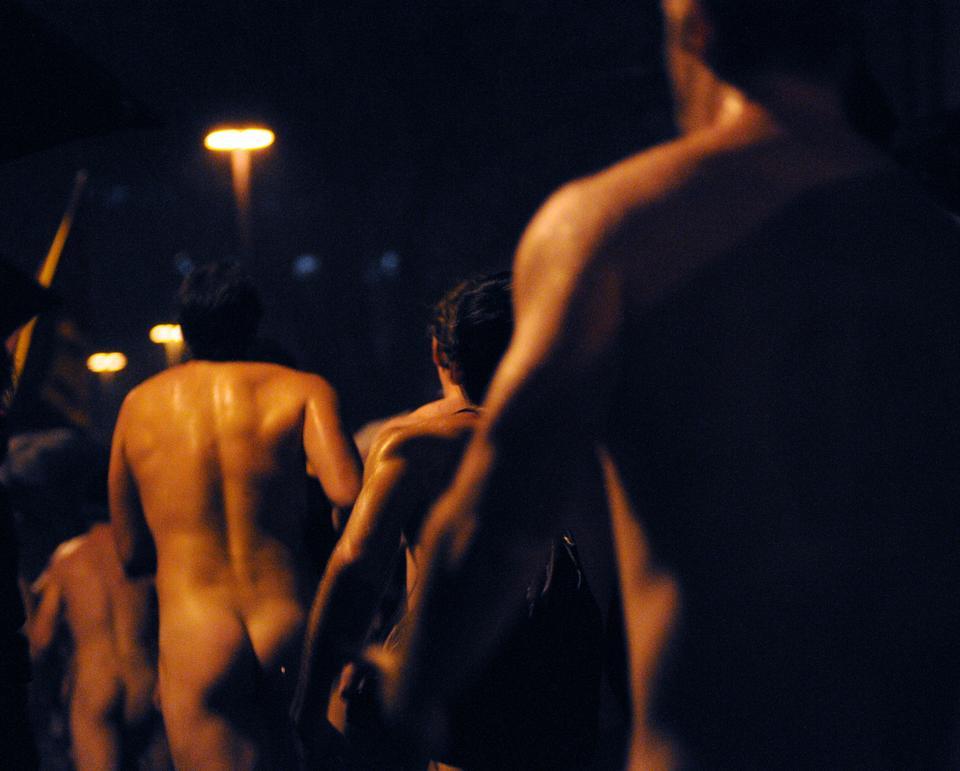 Harvard students celebrate the beginning of exam period with a naked run through the rain. By Polina Bartik
By Ariane Litalien and Kevin J. Wu, Crimson Staff Writers

Over a hundred Harvard undergraduates took a break from studying for half an hour last night, ditching their books and their clothes for a run around the Yard in a tradition known as “Primal Scream.”

The students braved heavy rain and wind to streak around the Yard in commemoration of the first day of exams, which begin at 9 a.m. today.

Michael J. Graham ’10, a super-senior in Currier, had his body painted bright green in honor of his house for his last primal scream.

“The rain acts like a shower—it cools you off as you are running,” Graham said, as the green paint dripped off his body.

The temperature, which was in the low 50s, was unusually high. Last winter, primal scream took place in the midst of flurries.

Nicholas E. Scheidler ’13, who participated last December, decided to come to the Yard to cheer on his friends.

“I feel like I did my duty, so this year I’m watching,” he said.

Other onlookers, however, were not from Harvard College.

Marty Laboytton, who hails from New Orleans, was visiting his niece in the area when he came across a horde of naked students.

“It’s like a parade in New Orleans,” he said, adding that he probably would have taken part in a similar activity when he was in college.

Just as in previous years, the Harvard University Band performed in front of the statue of John Harvard.

At ten past midnight, the band headed over to Lamont Library, where its members launched into a loud rendition of “Ten Thousand Men of Harvard.”

“Shh…it’s a library!” the band members whispered after their impromptu performance.

Primal Scream allegedly dates back to the 1960s, when students used to scream from their dormitory windows for 10 minutes straight the night before final exams.

—Staff writer Kevin J. Wu can be reached at kwu@college.harvard.edu.