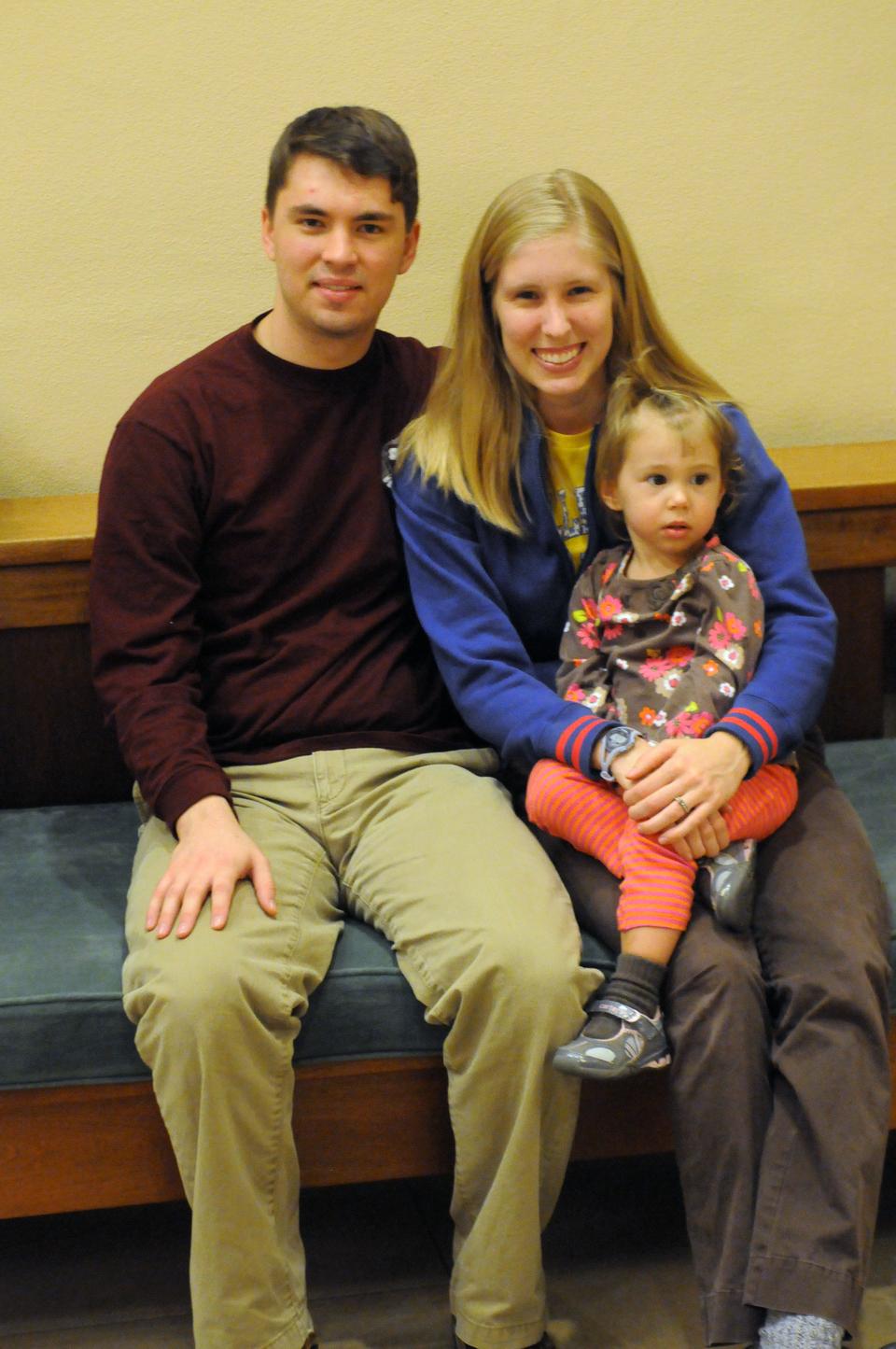 The McGinnisses are both undergraduates, he at Harvard and she at Wellesley. The couple takes a break from studying for final exams to play with their two year old daughter, Sophie.
By Jane Seo, Crimson Staff Writer

In October, while his peers were busily cramming for upcoming midterms, Eric Westphal ’14 had something else on his mind. “I wanted to surprise my wife for our one-year anniversary,” Westphal says.

E. Hillel Z. Nadler ’11 does not consider himself a very good cook, so he does most of the housework—washing dishes, sweeping and mopping floors, and cleaning the bathroom—to help out his wife, he says.

And after attending a day’s lectures and sections, Loren S. McGinnis ’11 comes home to an apartment in Cambridge for his after school “extracurricular activity”: being with his family. “Having a family is like being involved in clubs or athletic teams,” McGinnis says, as he picked up his giggling two-year-old daughter Sophie and put her in his lap.

These three young men are both students and husbands, a dual responsibility undertaken by 7 percent of American college students, according to the 2003 United States Census. But at Harvard, the number of married students is far below the national average. Here, only 27 undergraduates identify themselves as married, according to Karen Pearce, director of operations for the Faculty of Arts and Sciences Registrar’s Office.

Though many undergraduates have romantic attachments while on campus, few of them choose to marry while students. And unlike relationships that end with graduation, these students married with the understanding that their relationship would last the duration of their lives.

“We believe that...marriage is an eternal commitment,” McGinnis says.

Whereas some say they choose to marry for religious reasons, all of them say they did it for love.

GETTING TO KNOW YOU

To hear Westphal, McGinnis, and Nadler talk about how they met their future spouses sounds more befitting a romantic comedy than the mundane happenings in the real world.

Westphal met his wife in their high school’s graphic design class. He was a sophomore, and she was a senior. After dating for eight months, Westphal says he was ready to pop the question, so on the day of his wife’s birthday, Westphal organized a scavenger hunt that led her to his house.

“I was hiding in the little side of the backyard,” Westphal says, “and she found me with a ring.” At the time, he was 19.

Nadler, who took a year off to study abroad, met Tova S. Weiner Nadler ’10 at the beginning of their freshman year at Harvard Hillel. Within a few months they were dating, and by the next summer, Nadler says he was thinking about marriage.

The two visited Toronto for the marriage of one of Nadler’s family friends. While strolling around downtown, Nadler led Weiner to a music store, where Nadler sat down on a piano nearby and played Sam Cooke’s love song, “You Send Me.”

“Now I find myself wanting to marry you and take you home,” Nadler sang.

The couple tied the knot in a traditional Jewish ceremony in Los Angeles last January.

McGinnis, a member of the Church of Jesus Christ of Latter-day Saints, was hanging out in his room when his roommate had some friends from Wellesley over—among them was Erica H. Hawkins. “When I met her, basically the thinking was, ‘This is the right person. I want to marry her,’” McGinnis says. The two dated all of freshman year, and in June 2008, they flew to the mountains in Utah, Erica McGinnis’ home state. While they walked along the path near Salt Lake, stopping at a bridge over the waterfall, McGinnis bent down on his knee and proposed.

For both McGinnis and Nadler, religious beliefs played a role in their decision to marry young.

McGinnis, who was born in Colo. and attends church every Sunday, says that on average Mormons marry earlier than the population as a whole.

McGinnis, who is interested in software design, says that the early marriage age could be attributed to the high value that Mormons place on family and marriage.

“I can go to Harvard and get as many prefixes as I want,” McGinnis says, “but the most important title I’d have in my life is fatherhood.”

McGinnis also says that marriage is a practical response to Mormonism’s rules against premarital sex—the result is that Mormons tend to have a shorter “courtship process,” he says.

Nadler, an Orthodox Jew, says that some who share his religious beliefs also tend to marry young. According to the US Census Bureau, the median age of a first marriage in the United States was 28.2 for men and 26.1 for women in 2010. Nadler says that based on his experience, he thinks many Orthodox Jews marry earlier in their 20s.

Many of Nadler’s friends were already married when he married, Nadler says. As a result, Nadler, who hopes to attend law school or graduate school in philosophy, says he was “very familiar and comfortable with having this traditional responsibility.”

But married students says that married life has proven to be a balancing act. One of the toughest challenges Westphal says he faces as a married undergraduate is feeling like he is precluded from opportunities at Harvard.

Westphal has joined clubs on campus, including Harvard Christian Faith and Action, but he says that he does not plan on studying abroad.

“It’s not very plausible,” he says, “because I want to dedicate time for [his wife] Cheryl.”

Aside from the personal difficulty of balancing the worlds of home and school, McGinnis and his wife says that they have experienced a lack of institutional support for married undergraduates from the College.

“We can’t live on campus and can’t be a part of the campus community,” says Erica McGinnis, who is now a senior at Wellesley.

Students with children, however, “may be eligible for Harvard-affiliated housing through Harvard Real Estate Services,” according to the Handbook.

McGinnis also says that because he is not on the dining plan, which comes along with living in a dorm, “I’m excluded from a lot of academic and social activities,” he says.

McGinnis says he remembered one incident in his sophomore year when he had to meet with his academic advisor to declare his concentration. But, his advisor held his office hours in a dining hall, a location inaccessible to McGinnis, who does not have swipe access because he does not live in a House. Instead of meeting with his advisor like all the other students did, McGinnis had to make arrangements to meet elsewhere.

But Westphal, now a freshman, has seen the College make accommodations for him as a married student. Prior to this academic year, Westphal says he spoke with Freshman Dean Thomas A. Dingman ’67 about whether he should commute to campus each day or whether he could live in a freshman dorm with his peers. After the conversation, Westphal and Dingman decided that Westphal should live on campus—marking an exception to the College’s policy.

This year, Westphal makes his home in a single in Matthews on weekdays. On most weekends, however, he goes to see his wife, who lives in her parents’ house in Everett, Mass.

JUST THE WAY YOU ARE

Before he married, Westphal says he was unsure how he would adjust to the married lifestyle. McGinnis and Nadler says they had similar initial concerns. But even with the challenges that marriage brings, all three says they have no regrets about their decision to get married.

They also says people at Harvard have welcomed their decision to marry young. Although some people were surprised, Nadler says, “most of our friends were accepting and excited for us.”

“At Harvard, people find it cool that I’m married,” Westphal says. “But in high school some people were judgmental.” But he would respond, “It’s my life, it’s none of your business.”

The primary challenge McGinnis says he has faced while married has been the stress associated with raising a child. This month, McGinnis’ daughter will turn 2. In raising her, McGinnis says he and his wife sacrificed friendships and countless nights of sleep.

But both parents agreed that having a daughter changed their lives for the better.

“Just watching her run around brings joy to my heart,” McGinnis says.