Upset-Minded Harvard Falls at No. 4 UConn 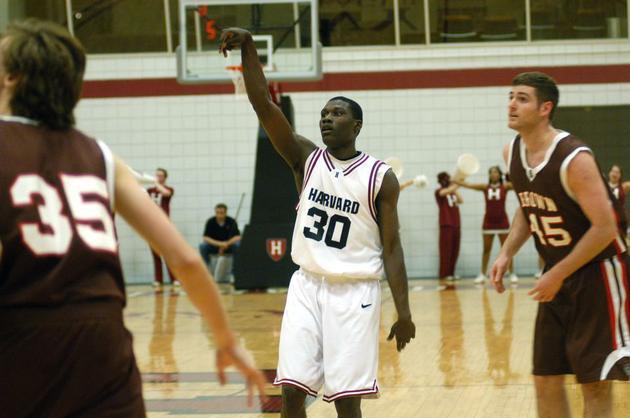 HARTFORD, CONN.–The Harvard men’s basketball team traveled to Connecticut with hopes of handing the No. 4 Huskies their first defeat of the season. But after last night’s 81-52 loss in front of 11,255 at the XL Center, the Crimson (7-3) will return to Cambridge having suffered the same fate as each of UConn’s nine previous opponents.

Using their superior strength and athleticism, the Huskies (10-0) grabbed a commanding lead early in the contest and cruised to the 29-point victory—their second largest of the season.

Capitalizing on Harvard’s early offensive struggles, UConn jumped out to a 21-6 advantage and then saw its lead balloon to as much as 27 by the end of the first half, effectively sealing the victory.

“They’re a really outstanding basketball team,” Crimson coach Tommy Amaker said. “They are a very talented team, but they play really well together.” After an 11-day layoff for exam period, Harvard turned in its worst offensive output of the season, shooting a season-low 30 percent from the field while coughing up 17 turnovers.

The Crimson struggled from beyond the arc in particular, connecting on just 4-of-31 attempts from deep.

“Our ability to make an open shot to loosen things up wasn’t there,” Amaker said. “They make you work so hard to get open, to make a pass, to feed the post. Their quickness on the perimeter was outstanding, so they put a lot of pressure on our perimeter shots.”

Junior co-captain Keith Wright led Harvard’s offense with 18 points, scoring off a variety of post moves on 8-of-12 shooting.

But the Huskies talented frontcourt, led by 6'9" Alex Oriakhi and 7'0" Charles Okwandu made it difficult for the Crimson to run its offense through the post in the opening minutes. Wright didn’t score his first basket until more than eight minutes had elapsed in the game.

“They’re so long, and their timing and shot blocking was tremendous,” Amaker said of the UConn frontcourt. “Certainly I thought that affected us.”

Sophomore Christian Webster—who entered the contest as Harvard’s leading scorer, averaging 16.6 points per game—struggled to find his stroke, finishing with two points on 0-of-9 shooting from the floor.

“I think we did a really good job on [Webster],” said Oriakhi, who anchored the Huskies with 10 points and nine rebounds. “When your leading scorer doesn’t really get it going, I think it’s hard for a team to get going offensively.”

But Webster wasn’t the only Crimson player who struggled to connect from the floor, as Harvard missed its first 12 shots and its first 10 three-point attempts.

The Huskies capitalized on the Crimson’s early struggles, rattling off an 11-0 run to start the game.

UConn guard Kemba Walker—arguably the nation’s top player—sparked the run, finishing a tough layup over Harvard sophomore Brandyn Curry two minutes into the contest for the first of his game-high 20 points on the evening.

After misses from Wright and Webster and a turnover from Curry, rookie Niels Giffey found Okwandu open under the basket for the easy two to put the home squad up 4-0. Two minutes later, Okwandu struck again, this time sticking a short jumper.

A Webster travel on the Crimson’s ensuing possession returned the ball to the Huskies, who put the ball in the hands of freshman Shabazz Napier. The 6’0” guard attacked the hoop and finished the basket despite being fouled.

Coming off the bench, freshman Laurent Rivard attempted to jumpstart Harvard’s dormant offense, but his first three-point attempt was off its mark. Freshman Ugo Okam pulled down the offensive rebound, but the seven-footer was unable to convert the put-back layup.

The Huskies sank a jumper on their next possession, forcing Amaker to burn a 30-second timeout with the Crimson down 11-0 six minutes into the contest.

Rivard ended the scoring drought with two free throws out of the break, but the squad’s offensive woes continued.

“I thought we came out just not ready,” sophomore Oliver McNally said. “I think we were a little scared. I don’t think we were ready.”

Coming off the bench, sophomore Kyle Casey gave Harvard some much-needed energy, coming up with a steal at midcourt and throwing down a thunderous dunk to bring the Crimson back within nine, 15-6. But Harvard experienced another offensive drought following Casey’s slam, and the Huskies went on a 15-2 run, led by five points from Walker to establish a 30-8 lead with 5:49 left in the half.

“Offensively, we were an absolute mess,” McNally said.

After going into the break down by 27, the Crimson managed to cut the lead to 19 midway through the second period, thanks to buckets from Wright and Rivard, but UConn built its lead back up to 25 within minutes.

“I thought our kids were really frustrated with not being able to make some shots,” Amaker said. “Sometimes that happens where [missing shots] zaps your energy on defense, and I thought that Connecticut took advantage of every mishap we had and did a tremendous job [yesterday] evening.”