Crimson Looks To Knock Off No. 4 UConn Tonight 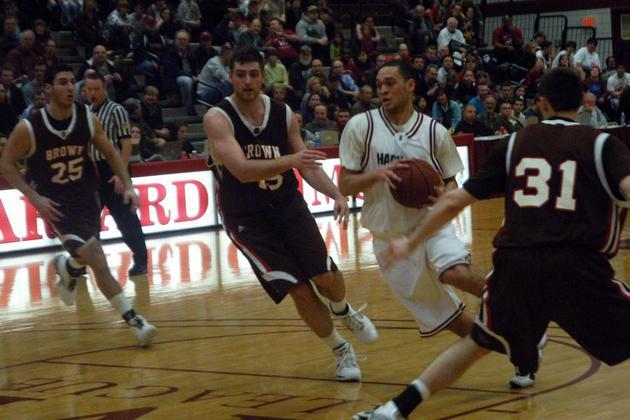 Sophomore wing Christian Webster will need to have his shooting touch if Harvard is to upset No. 4 UConn on the road tonight.

After the Connecticut women’s basketball team broke the NCAA Division I record last night with its 89th consecutive victory, the Harvard men’s basketball squad is looking to make national headlines of its own by upsetting the Huskies’ male counterparts on the same court one evening later.

Doing so will require a team effort of a magnitude never before seen in Crimson basketball history, as taking down No. 4 UConn (9-0)–the highest-ranked team Harvard has faced in 19 years–will be quite the tall order.

But that’s not to say it’s not achievable. Last season, the Crimson (7-2) hung with the then-No. 14 Huskies, who had to survive a late run to hold off Harvard 79-73 in Storrs.

“[We learned last year] that we have the ability to play with them,” junior co-captain Oliver McNally said. “We have to come in with the intent to try to win the game, not just to play well.”

Though the Crimson nearly pulled off the upset in 2009, that game was largely a one-man show that turned into Jeremy Lin ‘10’s coming-out party. The senior dominated the Husky defense, scoring 30 points, throwing down two dunks, and becoming a nationally-recognized sensation in the process.

This season, knocking off Connecticut without Lin–now a Golden State Warrior–will require contributions from every Harvard player on both sides of the court.

Offensively, the Crimson will need two of its top shooters–freshman Laurent Rivard and sophomore Christian Webster–to be on from long distance.

The team often lives and dies with the three against superior competition and at times has struggled from downtown in front of large crowds on the road.

In the squad’s first loss this year, both Rivard and Webster–the team’s leading scorer at 16.6 points per game–struggled from three-point land at George Mason, and the team lost by 13. In its other defeat, at Michigan earlier in the month, Webster again was off, but Rivard was on from behind the arc. The Crimson lost by just three to the Wolverines.

If one or both does not have his shot early in the game, McNally and sophomore Brandyn Curry will need to step-up their perimeter scoring in front of the likely 10,000-plus person crowd at the XL Center.

“We’re just trying to stay sharp and execute well in practice [this week], which will generally carry over to the game,” McNally said.

The team will also need continued strong production inside from McNally’s co-captain Keith Wright, both in the paint and on the glass. Wright has averaged 15.7 points and 8.8 rebounds per contest this season, but will have the tough task of going up against UConn sophomore center Alex Oriakhi tonight. Oriakhi averages a double-double with 11.4 points and 10.0 rebounds for a Husky team that ranks fourth in the country in rebounding.

Wright will receive help on the boards from sophomore forward Kyle Casey and junior Andrew Van Nest. Casey has been hampered by illness and a foot injury that has prevented him from seeing major minutes in any of the team’s last three contests.

For Harvard to pull off the upset, Casey–who has averaged just 4.4 points and 3.2 rebounds in limited action this season–will have to look like the player who was a preseason First Team All-Ivy selection.

The Crimson has had 11 days to prepare for the Huskies since its last game, a 16-point win over Boston University, giving Casey and his teammates the chance to get healthy.