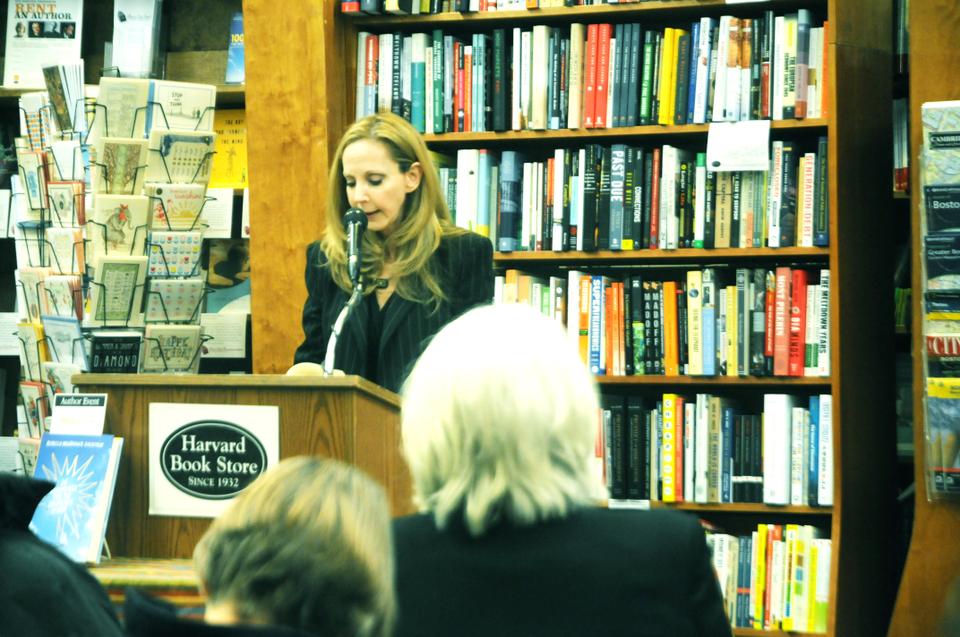 Philosopher, novelist, and MacArthur Fellow Rebecca N. Goldstein has spent most of her life asking herself what she calls the ...
By Kathryn C. Reed

Philosopher, novelist, and MacArthur Fellow Rebecca N. Goldstein has spent most of her life asking herself what she calls the “messier” questions of philosophy. With a new novel, “36 Arguments for the Existence of God: A Work of Fiction,” and a book tour underway, FM caught her after a reading at the Harvard Book Store to sort through some of the mess and to ask some questions of our own.

Fifteen Minutes: While earning your Ph.D. in philosophy at Princeton, did you ever think that you would become a MacArthur Fellow for writing novels and not philosophy?

Rebecca N. Goldstein: No, I mean one, I never thought I’d end up writing novels and two, I mean who ever thinks that they’re going to become a MacArthur Fellow? When I got the call I thought it was one of my students putting me on, really. It was a very surreal moment.

FM: You have written two works of nonfiction, seven of fiction, and a number of short stories. What do you believe is the main purpose of your writing and what do you hope readers take away from it?

RNG: My characters, fiction and nonfiction, care passionately about deep questions. I think the dichotomy between thinking and the passions is a false one. The idea that often comes across in novels of these dry, sterile thinkers who need some little woman to come and teach them about feelings and all that—that’s bullshit. It’s just not true. Thinking is a passion itself.

FM: Let’s talk about your transition to novelist. What first caused your departure from the “very formal, very precise questions” of philosophy to asking the most “unprofessional sorts of questions”?

RNG: I had this very emotional year. I lost my father and also gave birth to my first child. So it was life, birth, death—all these big questions that I had been trained not to take seriously because I did very analytical studies. I took philosophy of science and a lot of mathematical logic and if you asked in my department in those days, “What’s the meaning of it all?” or, “What are we here for?” you would have been laughed out of the lunch room.

FM: And why turn to literature?

RNG: What those two events did, especially having my child, was to tie me to life in a real way that I hadn’t been before. I had just never thought about those sorts of questions and I wanted to bring them together. I couldn’t do it philosophically because the way I had been trained philosophically just wouldn’t allow it; I couldn’t make it precise enough. I love the fact that literature is not precise, that fiction is not precise. It can do justice to the messiness, the confusion, the conflicts, the ambiguity—I love that about it.

FM: Cass Seltzer, the main character of your book, is seen as an “atheist with a soul.” Do you also see yourself this way?

RNG: That’s funny because I never did before, but I’ve had all these interviews and they’ll say, “So you’re the atheist.” What I mean by having a soul is having the capacity for ontological wonder—wondering at existence itself, being overwhelmed by it. I think every artist has got to have soul in this sense and not just artists either—even great scientists do, great mathematicians do. They have this kind of ability to be drawn outside of themselves by something splendid.

FM: What do you believe is the most compelling argument for the existence of God?

RNG: Number 35 is the best argument but it’s for Spinoza’s God. What Spinoza means by “God” is this world that we are in [that] explains everything. So it’s not for a god that exists outside of the universe, it’s for the universe itself as a source of all of our wonder. And I kind of believe that. I don’t like any of the other ones—I think they’re kind of weak.

FM: What do you believe is the most compelling argument against the existence of God?

RNG: I think for me the strongest argument is I just find it too difficult to reconcile suffering, especially suffering of children, of innocence with the notion of a transcendent God who cares about us. I just think if you look at history and look at the world, if you read today’s paper, to me it’s impossible.

FM: What would you like your readers to take away from this novel in particular?

RNG: The multifaceted nature of religion, that it’s about so much more than belief in God and it’s true that it’s innate to human nature—as evolutionary biologists are demonstrating more and more. Also romantic love—the kind of deification of the love object, the sense that, “if that person doesn’t love me back, I am doomed.” It’s got a kind of religious aspect to it. That’s what I very much wanted to portray as well, and that’s a religion that nobody doubts—nobody doubts love. But I think that this sort of romantic, erotic energy also goes into religious passion as well. It’s messy, it’s all messy, we’re so much messier than philosophers would like us to think.

FM: The characters in your story range from the strictly scientific to devotedly religious in their ideals. In society, do you believe that these opposing views can be reconciled?

RNG: I don’t think that science in and of itself shows that there’s no God and science can’t explain why there’s something rather than nothing, if that question makes sense. So one can hold both views and not be guilty of inconsistency I would say.

FM: Should we strive towards a world where science has disproved religion?

RNG: Religion answers to many needs, so just showing that there are no good strict, logical, scientific grounds is not going to remove religion. I think that it will always be with us and, as long as it’s controlled with a little dose of skepticism, it’s good. One does hope for a little bit of doubt to be seeded into religion, that would be a hopeful thing.

FM: How have your own religious and moral views changed throughout the course of your life? What has had the greatest impact on them?

RNG: Philosophy has had the greatest impact. I was brought up in a very Orthodox [Jewish] family and was sent to an even more Orthodox school because my parents thought that I needed straightening out, so they sent me to an extreme Orthodox school of all girls. It worked in the opposite direction. I discovered philosophy early on and I just loved it. It gave me this sense of wonder about what a good explanation was and it was like drinking from a well when you’ve been dying in the desert.

FM: Your husband Steven Pinker has written books such as “The Stuff of Thought” and “How the Mind Works,” which deal with the intricacies of language and the psychological aspects of the brain, respectively. Is there any overlap in your work?

RNG: Well, we’ve only been married for a little over two years, so most of his work and most of my work was done before we met each other. So we were very formed and our views were very formed when we met each other but I’d say we’ve somewhat validated each other’s viewpoints. We both believe that science defines the world and that we’re not just making up stories here. We’re both very strong believers that morality has nothing to do with theology. So there’s overlap in our views more than our work.

FM: Do you and your husband have any conflicting views?

RNG: We should to make us more interesting. Let me think. It’s terribly boring because we really agree very much. When we met I thought, “I wonder if we’re related...I want to know where his ancestors came from,” because we saw things so similarly.

FM: A lot of your novels focus on physicists and their answers to philosophical questions. Did you ever consider going into the sciences?

RNG: Oh yes, absolutely. I got my doctorate in the philosophy of science and I did study a lot of physics and I could see myself having been a physicist but I don’t know if I would have been any good. It was also very hard for women in physics.

FM: What is the most important thing, or at least one thing on your mind currently, that philosophy has changed about your day-to-day outlook on life?

RNG: What philosophy has really changed about my life is that it is always teaching me to question, to be very, very aware and to try to make questions as precise as possible. I’m very critical of my own beliefs, I’m always trying to question them to see if I have good grounds for believing them. It’s just the fabric of my life, really.