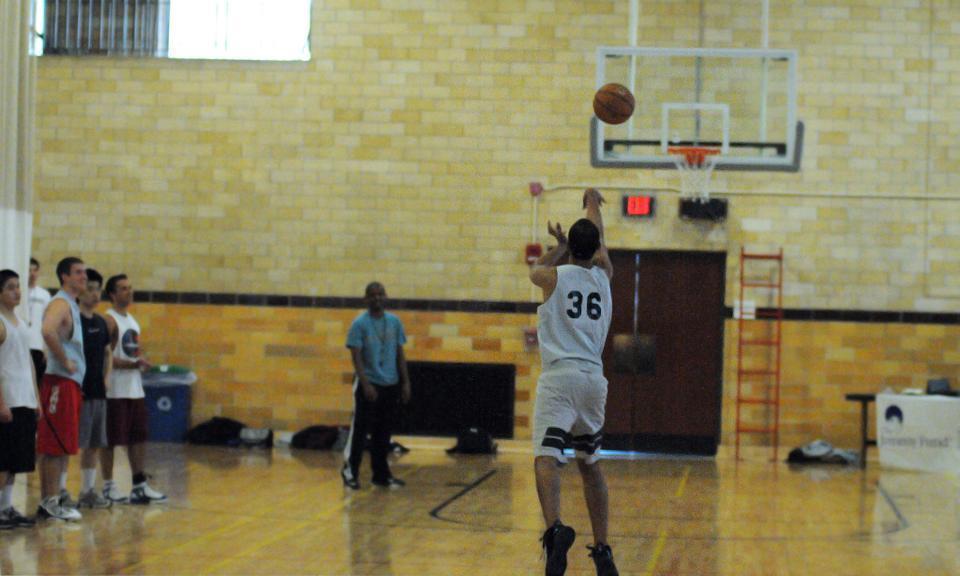 Players compete in Hoops Against Cancer, a basketball tournament sponsored by the Harvard Cancer Society yesterday at the MAC. Proceeds from the event will be donated to cancer research. By Juan Cantu
By James Yu, Contributing Writer

In the midst of March Madness, members of the Harvard community played in a basketball tournament of their own yesterday afternoon, competing for glory on the court and raising money to support cancer research.

Twenty-one teams participated in the 3 on 3 tournament, which was organized by the Harvard Cancer Society and brought in over $300 for the Jimmy Fund, a Boston-based charity that supports cancer research at the Dana-Farber Cancer Institute.

Brian L. Butler ’12, co-chair of the Hoops Against Cancer program within HCS, said that he and co-chair Christopher J. Guenard ’12 chose to work with the Jimmy Fund to support a local organization that has made a large impact in promoting pediatric cancer research.

“[The Jimmy Fund] has been very receptive,” Guenard said. “They gave us a lot of stuff to use, and that is something we like to continue relationships with.”

Butler and Guenard said that holding a basketball tournament raised awareness of the importance of cancer research among many people who were not familiar with HCS’s mission. Though the tournament was a relatively small fundraiser compared to Relay for Life, which raised over $125,000 last year, Guenard said that it was effective in broadening support for cancer research activities.

“It’s a core group of people who do stuff like Relay for Life,” Guenard said, “so [the basketball tournament] is a good way to outreach to a different group of people.”

The teams started off in round-robin play and were seeded in a single-elimination tournament bracket from the results of the round-robin. The team of Collier W. Winters ’11, Collin T. Zych ’11, and Dexter B. Monroe ’13 took home first place and a prize of three iPods.

“We just thought it was a great cause,” said Douglas W. Miller ’10, a member of the men’s varsity basketball team. “Some of my friends just wanted to have fun together and just relax and play some pick-up basketball.”