‘Machine’ Fails to Add Up to Success 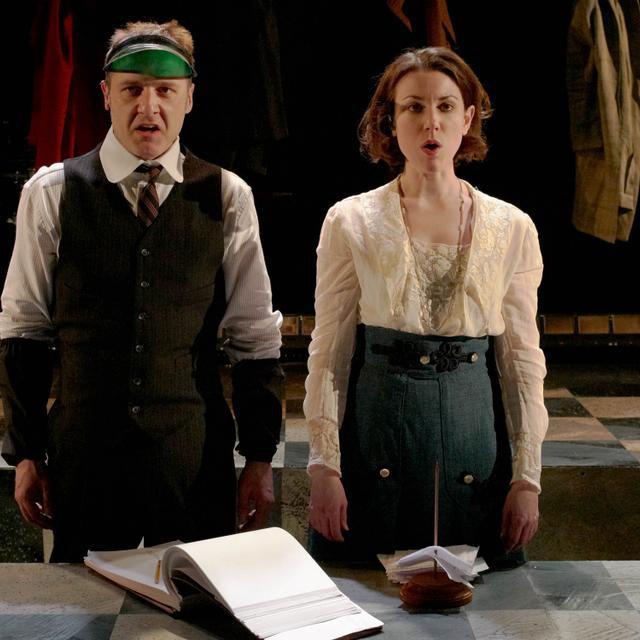 “In numbers, the mysteries of life can be revealed,” claims the cast of “Adding Machine,” the Off-Broadway musical making its New England premiere at SpeakEasy Stage Company, where it will run through April 10. Unfortunately, the musical fails to deliver any illuminating observations on either numbers or life’s mysteries. An adaptation of Elmer Rice’s 1923 expressionist play of the same title, “Adding Machine” tells the story of Mr. Zero, a downtrodden worker whose life suddenly collapses. What follows is a visually bizarre, musically unpleasant, and theatrically uninspiring slog through various 20th century intellectual trends, a trek made only slightly palatable by an innovative set and a glimmer of nuanced physical acting.

On the day of his 25th anniversary at his job, Mr. Zero (Brendan McNab) arrives at work expecting a promotion as a reward for all his years of dutiful service. Instead, his boss (who struggles to even remember Mr. Zero’s name) casually announces that he is fired, as a new adding machine will replace him. Furious, Mr. Zero kills his boss and is subsequently imprisoned and sentenced to death—a punishment that sends him to the Elysian Fields, an eerie afterlife where he reflects on his past existence.

From the show’s first moments, Mrs. Zero (Amelia Broome) brays at her husband, and it becomes immediately apparent that Mr. and Mrs. Zero are very unhappily married. “I was a fool when I picked you / You ain’t much to be proud of,” she wails ferociously in the opening scene.

Mr. Zero is equally malcontent—with his life (“I ain’t impressed”), with women (“Women make me sick!”), and even with total strangers (“Jews get two holidays to my one!”). Morally, he remains equally troubled, as he expresses doubt and contempt for organized religion, yet finds no other consistent ethical basis upon which to judge himself and others.

Frustratingly, however, this existential angst is as banal and simplistic as the characters’ blatantly symbolic names, and the play’s drama too often feels shallow. For instance, immediately after Mr. Zero reveals his crime to his wife, a solo musical number follows in which he oh-so-metaphorically wails his woes from a metal chain-link metal half-fence, thrashing about like a caged animal. In this nihilistic moment, his life comes undone. By grasping at threads of multiple modern philosophies, any coherent structure to the play is lost.

The root of this superficiality lies chiefly in the show’s actors, as their performances consistently fail to spark interest or emotional engagement. In scenes that are clearly aiming at tenderness—such as a rare moment of fond reminiscing shared by Mr. Zero and his wife the night before his execution—the actors dully recite trite exchanges which fail to evoke empathy, let alone hold attention.

The actors are actually most effective when they simply confine their performances to physical acting, such as when Broome savagely stamps around in sturdy, thick-strap Mary Jane shoes, as if ready to trample McNab at any moment. Always snappy and punctuated in her gestures, be it forcefully slapping down McNab’s newspaper or thrusting guests through the door as they arrive for a party, Broome moves with a brusque urgency that captures both the precision and frustration of her disappointing life.

“Disappointing” does not quite do justice to the atrocity that is the show’s music, composed by Joshua Schmidt. Despite going for the experience of a chamber musical—which feels more like a play with music than a traditional musical—some numbers are actively painful to suffer through (such as “Ham and Eggs” and “Freedom!”), and several others feel underdeveloped.

One of the show’s only engaging elements is its creatively macabre scenery, designed by Susan Zeeman Rogers. The main set piece, a luminous red backlit curtain with thick black vertical lines and a series of numbers scrawled graffiti-like across it, gives the feeling of being trapped in a prison cell of tortured mathematics. The stage floor is expansively checkered black and white, spreading like a maniacal chessboard, as if to imply that the men and women who traverse it are merely pawns at the hands of some greater power.

Beyond its basic set pieces, the work also benefits from compelling staging by director Paul Melone. The entire stage is horizontally cleaved by a deep, trench-like space, through which actors at times trudge like dogged soldiers in stiff ranks or drift like lonely, faceless strangers through their quotidian lives.

The show also frequently stages its actors in a kind of visual triptych, arranging characters and props in three distinct groups, be it three couples at a dinner party, three inmates in jail, or three melancholy adding men toiling at their monotonous work. The tripartite visual tableau frequently created by the staging suggests a fixed, sorrowful moment in time—a moment which invites scrutiny from a distance, like a painting on a wall.

Ultimately, “Adding Machine” lacks the elegant exposition of mathematical concepts found in recent works like David Auburn’s “Proof” and the 2001 film “A Beautiful Mind,” as well as sophisticated, lucid inquiry into the actual mysteries of life. Instead, the play gestures to too many twentieth century intellectual trends—rejection of religious morality, nihilism, and existentialism—and winds up flailing wildly, spinning like an ideological top.