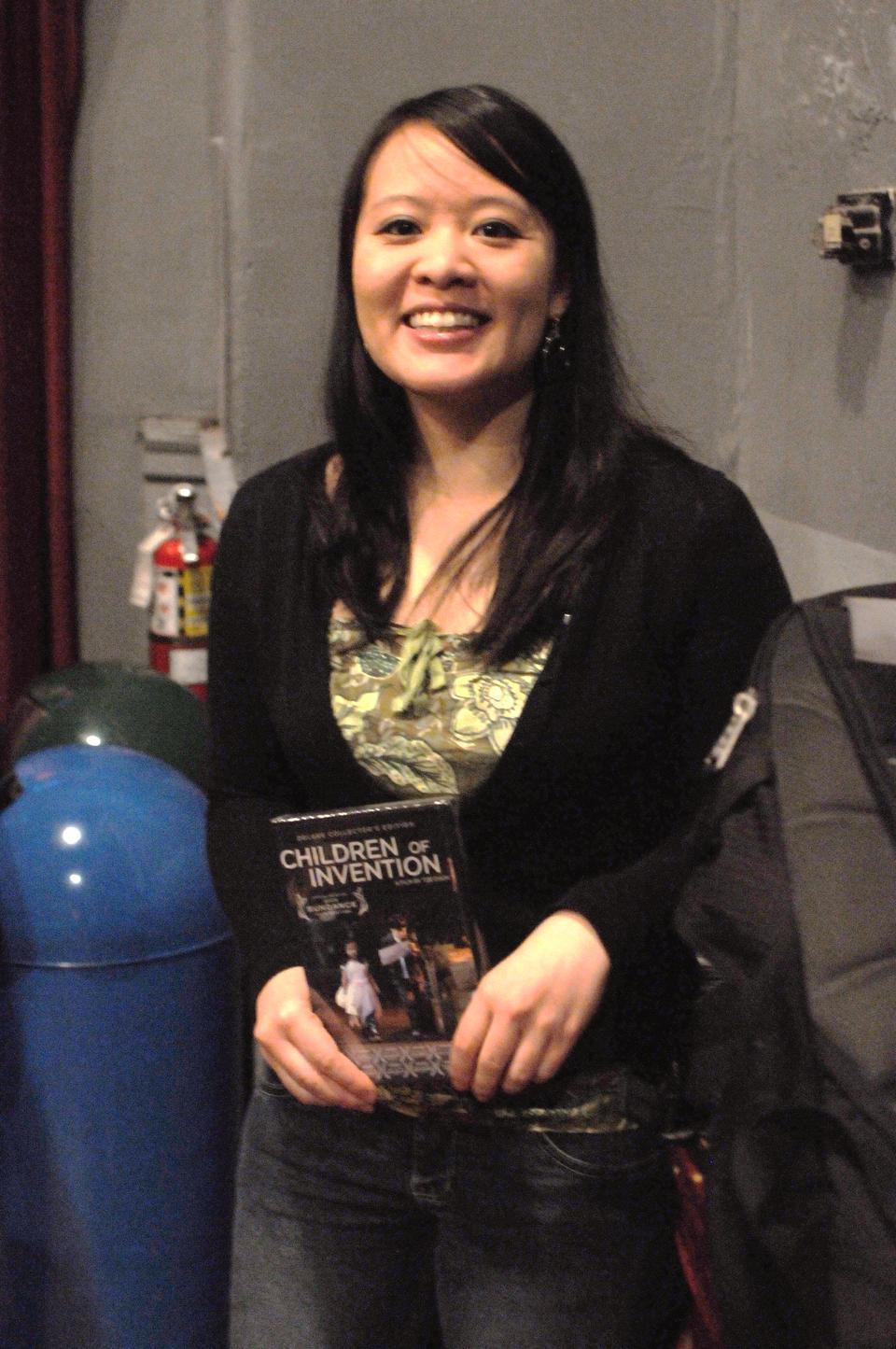 Independent film producer Mynette A. Louie ’97 recently returned to her old stomping grounds to promote her latest work with director Tze Chun, Sundance selection “Children of Invention.” The film, which tells the story of two Chinese-American children after their single mother disappears, premiered in Cambridge this past weekend, and screenings are scheduled for next week in New York and Los Angeles. A former East Asian Studies concentrator and Dunster resident, Louie graduated Phi Beta Kappa and went on to work in business and management, first in the media industry and now in film. She sat down to chat with FM about the highs, the lows, and the hotties of the indie film world.
By Stephanie M. Woo

Independent film producer Mynette A. Louie ’97 recently returned to her old stomping grounds to promote her latest work with director Tze Chun, Sundance selection “Children of Invention.” The film, which tells the story of two Chinese-American children after their single mother disappears, premiered in Cambridge this past weekend, and screenings are scheduled for next week in New York and Los Angeles. A former East Asian Studies concentrator and Dunster resident, Louie graduated Phi Beta Kappa and went on to work in business and management, first in the media industry and now in film. She sat down to chat with FM about the highs, the lows, and the hotties of the indie film world.

1. Fifteen Minutes: You’re a big-name producer in indie film. First things first: what does a producer do?

Mynette A. Louie: Not exactly — I wouldn’t say I’m a big-name producer. I’m more like an emerging producer. My answer to that is always what does a producer not do? The producer does not direct or write, but that’s about it. They do everything from raising finances to overseeing the physical production of the film, to distribution, to marketing, to hiring cast and crew.

2. FM: What drew you to producing?

MAL: I’ve always been split-brained. I’ve liked business and math stuff just as much as I’ve loved creative stuff, so producing is a nice marriage of the business and creative sides.

3. FM: When did you discover your interest in film?

MAL: I grew up in New York tripping over film sets. I’ve always been interested in film but I never thought of it as something practical to do, and it isn’t really. But I just fell in love with it. I started off in the magazine and publishing world—in the business side—and I did not really like it. After 9/11 I rethought my career and decided to switch to film producing.

4. FM: You concentrated in East Asian Studies at Harvard, focusing on Chinese film and literature. Looking back, should you have concentrated in Visual and Environmental Studies?

MAL: No. Actually, I’m glad I didn’t. All of my experiences, both in my studies and my professional life, even though they were not directly film related, contributed to my skills as a producer.

5. FM: How did your parents react when you told them you were going to make films instead of trade bonds?

MAL: (Laughs) I grew up like the kids in “Children of Invention,” with Chinese immigrant parents. The stereotype is that immigrant parents want their kids to assume traditional doctor, lawyer, business-type positions. My dad was a painter, so he knew firsthand how difficult it was to make it as an artist. But at the same time he has been a stock trader too. Ultimately they are not disappointed. My father is an artist, and my mother is artistically inclined, so they know the draw of the arts.

6. FM: “Children of Invention” has been recognized at dozens of film festivals across the country. What makes this a standout piece?

MAL: A lot of things make this movie special. It features the kind of characters that aren’t often depicted in film. First of all they are [an ethnic] minority. You don’t see many Asian American lead characters on screen, and you don’t see realistic portrayals of immigrants. This film ascribes to a realist aesthetic, so it almost feels like a documentary in terms of documenting the real lives of immigrants and the trials and tribulations they go through. It doesn’t tie things in a neat little bow. The story is more complex and meaningful than what is normally out there.

7. FM: As a young Asian American woman, have you experienced any challenges in the film industry?

MAL: I haven’t really encountered a glass ceiling, although I am still an emerging producer, so maybe somewhere down the line I will. And because I work in the independent film industry, which happens to be very liberal-minded, and I am the producer so I am the person in charge, I have not experienced any direct racism. Sometimes since I am Asian, people think I only make Asian American movies, so I do receive a lot of Asian American scripts, in addition to other scripts.

8. FM: Why do you feel drawn to the indie genre?

MAL: The types of films I choose to produce are a little more complex and meaningful, not to make myself sound grandiose or anything. I definitely like to work on films that tell more complex human stories. Usually films that have some sort of social message to them, nothing overtly propaganda, but talking about the real human condition.

9. FM: The film industry is often associated with glitz and glamour. Is this an accurate representation?

MAL: It’s a fun business. There are parties and festivals and things like that. People dress up, and if people consider that glamorous, then I guess it is. But there is a reason why people call it production—it’s a manufacturing industry ,and it’s very labor-intensive. I’ve done many different professions, and direction and producing a film is by far the hardest thing that you can do. It’s all-consuming, and that part isn’t glamorous. But when it does come time for you to put your film out on the festival circuit, a lot of people see it as glamorous because you go to parties. Even the festivals after a while get a little tiresome after you go to so many and the parties become part of work. Everybody sees the Us Weekly, People magazine side of it.

10. FM: You concentrated in EAS, went on to work in business, and now film. How do you feel your academic choices at Harvard impacted your career path?

MAL: I studied Chinese film and literature so I learned how to think and talk about story, which has been applicable to my film career. I definitely believe in a liberal arts education because the critical thinking and communication skills you learn help you in whatever career you choose. I do believe it’s true that it doesn’t matter what you majored in at college. You should do what you love to do and get good grades. That always helps.

11. FM:  You graduated Phi Beta Kappa. Got any tips for academic success?

MAL: Studying what you love so you actually enjoy reading and writing papers.

12.FM: How is Harvard different now from when you were an undergraduate?

MAL: I haven’t visited much since I graduated. The buildings look pretty much the same. I actually stay involved with the college as an alumni interviewer—it’s really great. It’s really fascinating meeting a new crop of kids every year and every so often a kid I interview will get in, and it’s a really good feeling. I miss it a lot. Walking around campus is very odd and nostalgic.

13. FM: What words of wisdom do you have for budding artists at Harvard?

MAL: Try to develop some practical skills in addition to your creative, artistic skills. It is challenging to work in the arts. In the independent film industry in particular, it’s hard to pay the bills. Everyone I know in the industry has to have another part-time job. It helps to have some kind of practical, marketable skill that will help pay the bills while you develop your art.

14. FM:  Who is your favorite actor in the indie realm? Least favorite?

MAL: There are so many great actors, it’s hard to choose, but I recently saw Ramin Bahrani’s “Chop Shop,” and the lead kid in that, Alejandro Polanco, is fantastic. Michelle Williams is also always great. And least favorite? It would be impolitic to say exactly who, but let’s just say it’s a certain young starlet.

MAL: Mark Ruffalo. He was on my plane to Berlin a few weeks ago, and he’s even cuter in person.