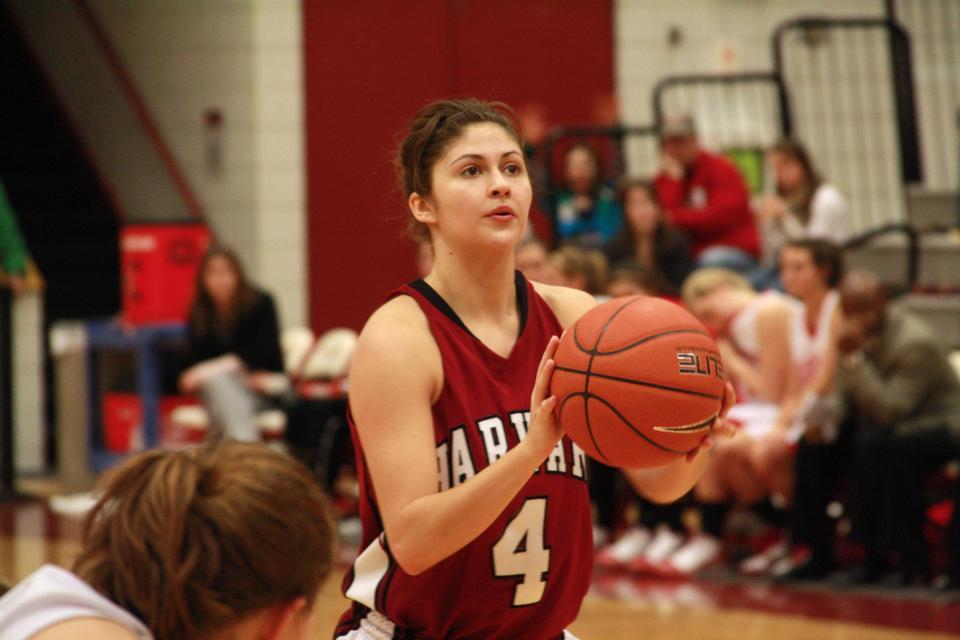 Brogan Berry, shown here in earlier action, and Harvard sit in second place in the Ivy League, two games behind Princeton with three games remaining. The Crimson will need a sweep this weekend to stay in the race. By ROBERT L. RUFFINS
By Molly E. Kelly, Contributing Writer

After dropping games to Dartmouth and Princeton earlier in the season, the Crimson (18-7, 9-2 Ivy) needs to win every remaining game in its schedule to maintain a shot at capturing its 12th Ivy League title.

Coming off two weeks on the road, Harvard makes its return to the Lavietes Pavilion tonight to face Penn (1-24, 0-11 Ivy). In the last match-up, junior guard and co-captain Christine Matera led the Crimson with 19 points to hand the Quakers a 66-40 loss.

But despite Penn’s lopsided record, Harvard is careful to avoid the trap of complacency.

“Penn has a new coach, [Mike McLaughlin], and they have a not-so-good record, but he has done a great job and his kids are playing as a team,” said Crimson coach Kathy Delaney-Smith. “Even though Princeton is the team to beat this weekend, we’re trying to treat Penn the same way.”

“Penn’s record shows that we’re a better team because they haven’t won as many games, “ she said. “But, the thing is, the Ivy League is really competitive. On any given night, any team could lose to the other team.”

The Quakers, in fact, have a rather unique weapon in their arsenal. Most teams tend to carry a handful of dangerous players to watch, but Penn has broken away from this tradition. “The danger of Penn is the opposite,” Delaney-Smith said. “They have a bunch of players and on any given night one can hurt you.”

“We’ve been away and we’ve had some real battles,” Delaney-Smith explained. “I’m proud of how our team came out with the winning streak.”

“The Yale game this past weekend was a team effort,” Wheeler said. “Everyone from the starters to the bench contributed. We keep getting better, and we emphasize that in practice. We remind ourselves that we’re raising the bar for ourselves and that we have our own standards we’re trying to reach.”

Harvard has also been practicing hard on the fundamentals of the game.

“Our main focus is defense and rebounding and making sure we outrebound other teams,” Matera said.

“We really needed to work on [defense and rebounding],” Wheeler added. “From that, it makes it easier to have an offensive flow.”

This dedicated practice in both defense and offense has allowed many of the Crimson athletes to put up strong numbers.

In her rookie season, freshman guard Victoria Lippert has performed with admirable consistency. Posting her third double double against Yale last weekend, Lippert is second on the team in scoring with 13.0 points per game.

“It’s obvious what Victoria is doing on the court,” Delaney-Smith said. “We’re not surprised. She’s a downright competitor and she’s very talented.”

Junior forward Emma Markley has also been instrumental in Harvard’s strong play this season. She currently leads the team with 14.2 points, 2.7 blocks, and 7.2 rebounds per game.

“Markley has been very consistent all year,” Delaney-Smith noted. “She’s been dominant and consistent as a shot blocker and a rebounder.”

Delaney-Smith was careful to point out the importance of Matera’s play as well.

“She’s been one of the top shooters in the league,” Delaney-Smith said. “People think she’s just a shooter but she’s not. She brings so much more to the team. She’s a tough, hardnosed kid and she knows the game well. She’s been through injury, through good and bad, and she’s been a leader.”

As point guard, sophomore Brogan Berry has also been essential in the Crimson’s success. Entering the final weekend of the season, Berry has 143 assists. She needs only two more to reach eighth place on Harvard’s single-season assists list.

“You can never say enough about someone like Berry,” Delaney-Smith explained. “Point guards are the pivotal position on any team...What a point guard does and brings to a team is irreplaceable and invaluable. She’s one of the best if not the best that’s played at Harvard.”

The Crimson will seek to maintain this high level of play and hopes to emerge from tonight’s game victorious. In doing so, Harvard will hold onto its undefeated home-court record and keep the race for the Ancient Eight title alive.