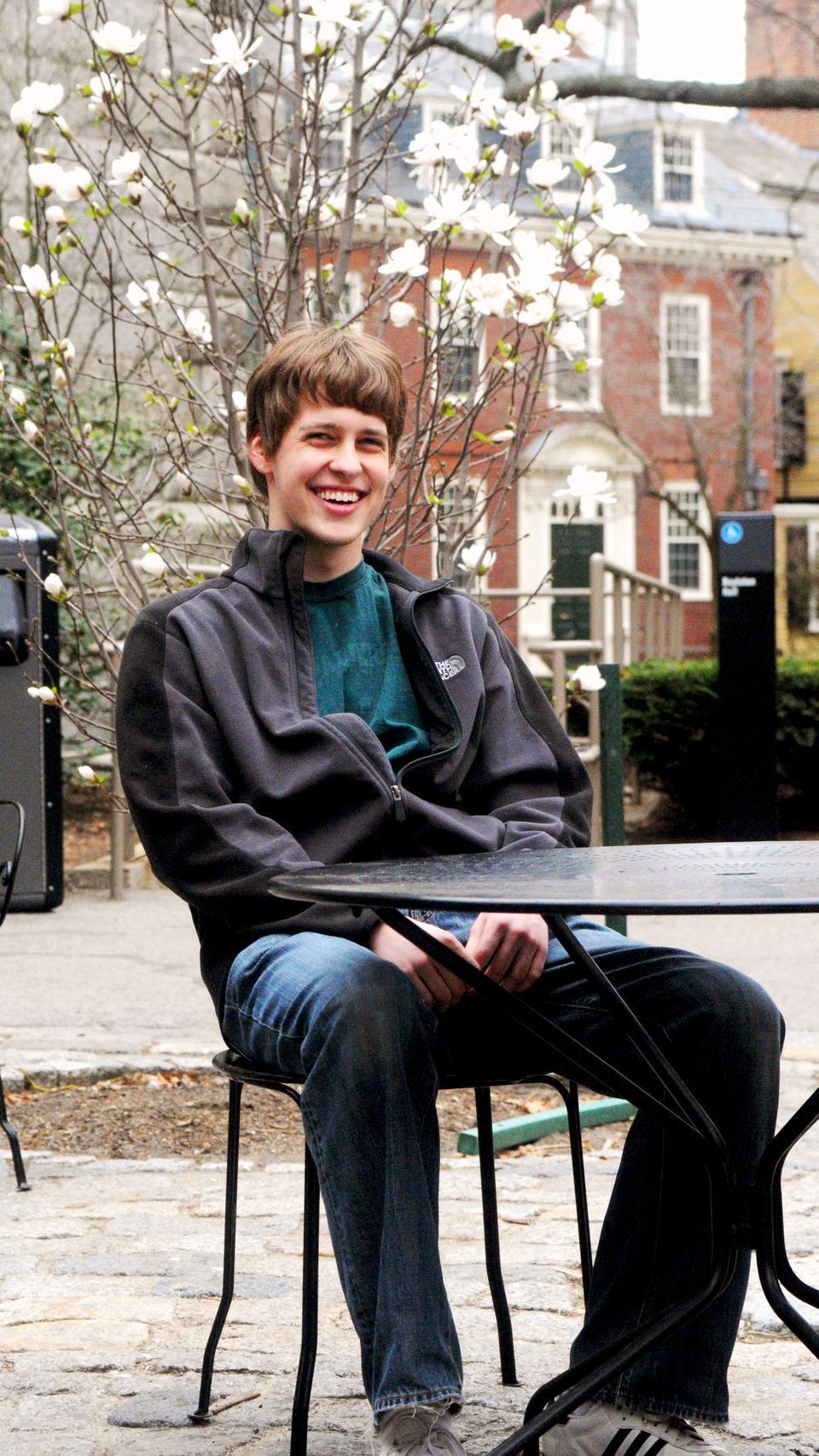 “The Gospel and my family are the two things in my life that are most important to me and bring me the most happiness,” Douglas C. Muhlestein ’13-’15 says.
By Liza E. Pincus

Lindsey M. Parker ’10 has cut down his extracurriculars this semester because, as he says, “It’s nice to have time just to spend with my wife and enjoy senior spring.”

Parker, now 25, married Stephanie Brinton Parker ’10 this past summer, and the pair now lives in Peabody Terrace, a Harvard-affiliated building behind Mather House, due to prohibitions against married students living in upperclass Houses. Parker is grateful he deferred his admission for two years before starting freshman year—otherwise, he wouldn’t have been in the same class as Brinton, and they likely wouldn’t have married or even dated.

Parker’s two-year deferral was spent in Poland, serving as a missionary for the Church of Jesus Christ of Latter-day Saints. “The basic thing we were trying to teach was that we are all sons and daughters of God,” Parker explains. “Our specific message for the Church of Latter-day Saints—the Mormon church—in our day, [is that] God has restored His true, existing Church onto the earth and in that Church contained the ordinances, all the teaching necessary for salvation.”

Mormon men between the ages of 19 and 25 are expected to complete a two-year mission in an assigned location, barring a prohibitive physical condition. Parker was born into the church and says he’s always known he wanted to go on a mission. “When you’re a little kid, you think, ‘I’m going to be cool like the missionaries that came to dinner.’ But it’s a big jump from saying ‘I’m going to serve’ when you’re eight years old to being 19 and, ‘I have to fill out these papers, and I have to get my dental check and I have to go.’”

“There’s definitely the issue of, if you don’t go, how will the rest of the church view me?” reflects Chad R. Cannon ’11. The 24-year-old returned to Harvard after completing the Fukuoka (“be careful with spelling,” he chides) mission in Japan. “I felt a sense of duty,” Cannon recalls, “but ultimately it became my desire.”

Douglas C. Muhlestein ’13-’15 won’t find out his exact assignment until April or May, but his dad and nine uncles all went on missions and he can’t wait. “The Gospel and my family are the two things in my life that are most important to me and bring me the most happiness,” he says. “So how great would it be to spend two years sharing my favorite thing with everyone I can?”

Serving on a mission is a mainly male responsibility within the Mormon Church, while “fellowshipping”—essentially serving a nurturing role to church members—is expected of females. But Muhlestein’s older sister, Whitney E. Muhlestein ’10, will also leave for her mission this summer. Girls are allowed to serve starting when they’re 21, which Muhlestein attributes to safety concerns, but also to the distinct appeals an older, more mature female might hold for potential believers. Muhlestein says her dad is very adamant about all his children serving on missions, but her decision was her own: she intends to go to graduate school or medical school after she gets back, “years where there won’t really be time to stop and focus entirely on my relationship with God, which I know is always the most important thing.”

She says that the prospect of being one of the very few females on her mission doesn’t bother her at all. “I do science, which is a little male dominated,” she says.

Cannon’s Harvard admission was deferred a year, and now that he’s back from his mission, he’s three years older than many people in his graduating class. Being so much older than his classmates was one of his main concerns, but Cannon says he doesn’t feel that out of place because he’s met a lot of Harvard students who have taken longer to graduate.

When he returned to school as a sophomore, Cannon found it hard to readjust to the schedule because during his mission, every hour of the day was planned for him. “When you come back, you’re thrown back into normal social things like dating and being exposed to the media,” Cannon says. “You realize when you can’t watch television how much of the things you think of as being socially normal come from what you see in the media.” Cannon asserts nonetheless that his mission experience improved his Harvard life. “It’s a good wake up call to what life is actually about,” Cannon says.

“It’s not just academics and work. Those things are great and really important, but it’s also really helpful to have spent that much time thinking about what a lot of people have in their hearts.”

Douglas Muhlestein considered waiting to start freshman year until after he had completed his mission, but didn’t want his first away-from-home experience to be for two straight years, with only four phone calls total (on Christmas Day and Mother’s Day), and no TV or movies allowed. Muhlestein intends to concentrate in computer science, and he says he’s not worried about disrupting his academic plans. “Harvard is really good at letting you leave,” he explains. “They say it’s easier to take two years off than to drop a class.”

Muhlestein says that his mission has served as a recurring conversation topic throughout his freshman year, especially amongst peers who are curious about such a big commitment to one’s faith. Though he believes that the general reaction to his decision is one of admiration and respect, Muhlestein muses: “People are always asking, ‘What house are you in next year?’ ‘Oh, well, I’m in Lowell House...a few years down the road.’”