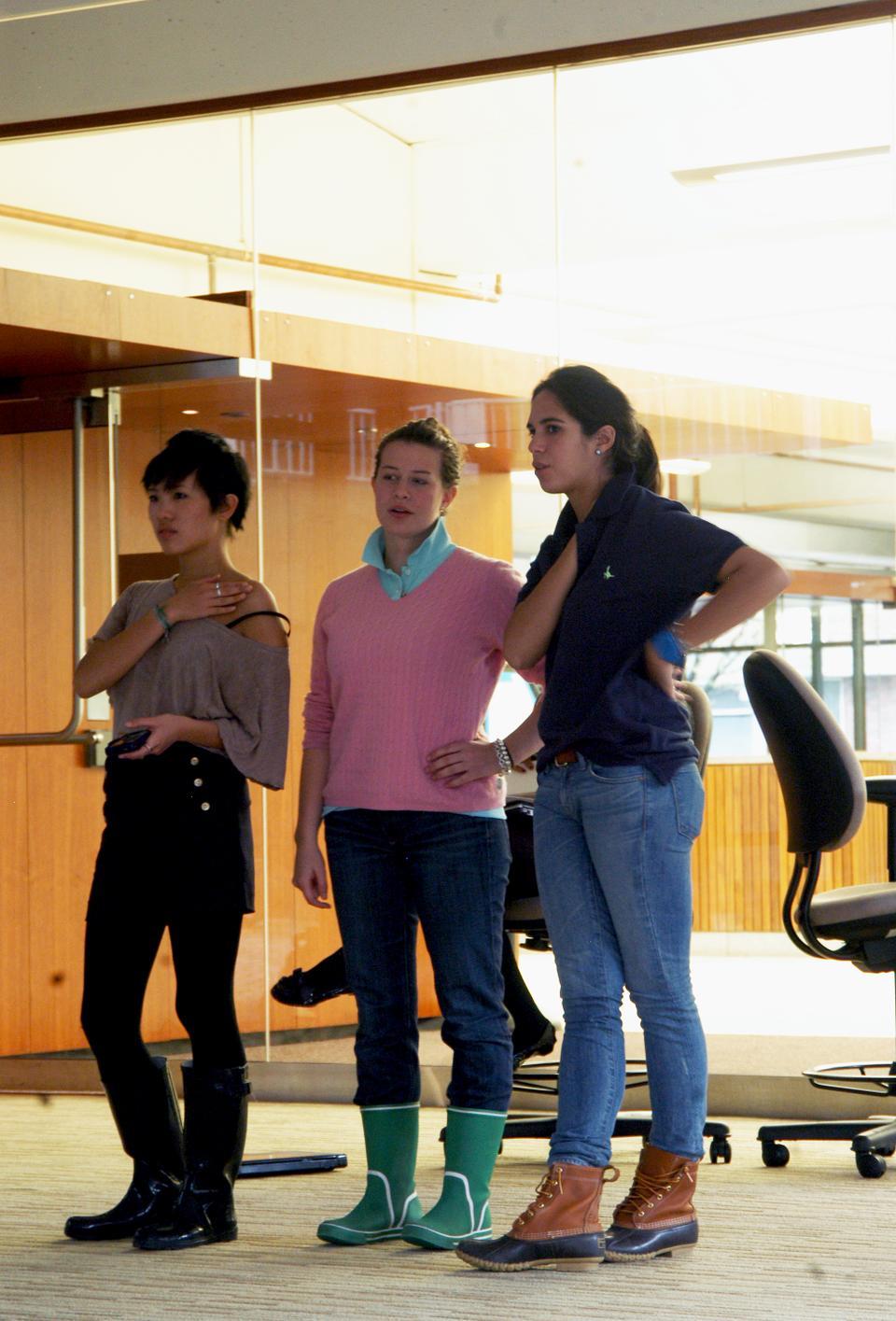 Friday morning, 9:15. A hazy quiet fills the streets: most of the college is either sound asleep in bed or ...
By Alexander J.B. Wells

Friday morning, 9:15. A hazy quiet fills the streets: most of the college is either sound asleep in bed or half asleep in class. For the cast of Eleganza, though, there is no such respite—not now, not with one week to spare before one of Harvard’s biggest fashion events of the year. The last 16 years of creativity and commitment have made the show into a campus institution to be reckoned with.

This morning, the Leverett Old Library is host to an emergency run-through of one scene: models shimmy and gyrate in their sweats up and down an imaginary runway.

In the corner sit two of the executive producers, Angela Su ’12 and Beatrice H. El-Hage ’11, tag-teaming between computer screens, cell phones and errands. Su is every bit the urban beauty queen: meticulously dressed in a checkered jacket and a light blue skirt, face frozen in a neutral, pensive gaze that doesn’t break even while talking. El-Hage appears restless, by contrast, as she pecks at her keyboard with a forceful energy. A few minutes later, the triumvirate is completed by the arrival of Carmen V. Feliz-Taveras ’11, who smiles warmly as she kneels in front of them and gives them the latest updates.

These three girls are responsible for making sure everything is in place on the big day. This is no easy task for an entirely student-run production that combines fashion, dance and music, drawing around 2,000 students. While it is the models who are the visual stars of the show, the heart of Eleganza is the executive production team. They are the ones who have to pull everything together. Yet somehow they seem to be managing; somehow they seem to be completely on top of things.

The team is arranged around a box of Dunkin’ Donuts, talking logistics and gossip. Feliz-Taveras is getting excited at the prospect of publicizing to prefrosh: “We want to show people that Harvard is fun,” she exclaims.

Meanwhile, the models are losing focus, struggling through moves they clearly haven’t learned yet. El-Hage is not impressed. “The show’s one week away,” she scolds. “You should be able to do it on your own now; you’re freaking me out!” A moment of silence, then the other two execs diffuse the tension with a laugh: they know when to play good cop. Rehearsals resume, a bit more in earnest, and soon enough the kinks are ironed out. Later, when asked if she’s ever really laid into someone, El-Hage says: “No. Well, I didn’t mean to. I just have a very rigid personality when it comes to getting things straight.” It seems to pay.

The rest of the day is hectic for the executive producers. Su finalizes the program while the other two split up to run errands. Feliz-Taveras returns later than expected: she and associate producer Wintha F. Kelati ’11, a Crimson business editor, made a quick stop after discovering they shared a love for McFlurries and fries. Bags are packed, permits are collected and fashion company insurance is solicited. The girls are used to this, explains Feliz-Taveras: “It’s, like, all day, every day.”

Friday, 4:00 p.m. The producers reconvene for a meeting in El-Hage’s room, a homely Claverly abode with Japanese prints and an impressionist landscape on the walls. On the floral rug there are boxes full of fashion donations for the post-show auction; beside them, from piles of posters, the sexy and austere Eleganza models stare angstfully across the room at a vintage map of Harvard.

The execs talk over their laptops with a wit and a pace that would leave even the Gilmore girls lagging behind. It’s hard to tell whether chit-chat is interspersed with business or vice versa. They discuss meetings with the Dean and have a clash over publicity that is quickly resolved. They share their love for the models and accuse each other of flirting with middle-aged men.

Not at all apologetically, the girls explain that their meetings last so long because they get along so well. “How awkward would it be if we hated each other?” asks Su. “Or if we hated one of us,” she adds. Some things would get done faster, perhaps. But Eleganza would not be the same for it.

The conversation finished with a discussion of poster duties. Doing it alone is a chore, it is decided, but with other people it’s much more fun and much more reliably finished. Predictable.

Saturday afternoon, 2:00. Eleganza is having a full run-through. The SOCH, usually a symbol of architectural and institutional awkwardness, is pounding with huge beats and bold moves. The clothes haven’t arrived yet, so the models follow their natural style: a hodgepodge mix ranging from designer skirts and cutaway tops to DHAs and slogan T-shirts.

No longer a single unit, the executive producers are spread out across the room, supervising and talking with the rest of the cast. For all their relaxed demeanor before, today is serious business. Su calls everybody in, and explains that they must run through it again but this time paying attention to the small things. “We’ll be shouting at you,” warns Feliz-Taveras, wearing her sweet grin that suggests anything but.

The complementary styles of the executives begin to take hold. Feliz-Taveras walks alongside the models, venturing suggestions and compliments. Su leads by example, using the respect she clearly commands. And El-Hage? On one of the trickier scenes, she goes to work. “Face! Walk together!”

Their mixture of seriousness and good humor seems to be contagious, as does their affection. Feliz-Taveras proudly beams, “The one thing we stress is having the Eleganza family.” Around the room, the models sit and talk and smile. As the rehearsal winds down the three execs stand together deep in serious conversation. Suddenly, they’re interrupted by Lil Wayne’s “I Get Crazy.” They break concentration and nod in time with the music, as if in enthusiastic agreement. It might be surprising that they’re so relaxed with only a week left. But, then again, a week is plenty of time for these girls.