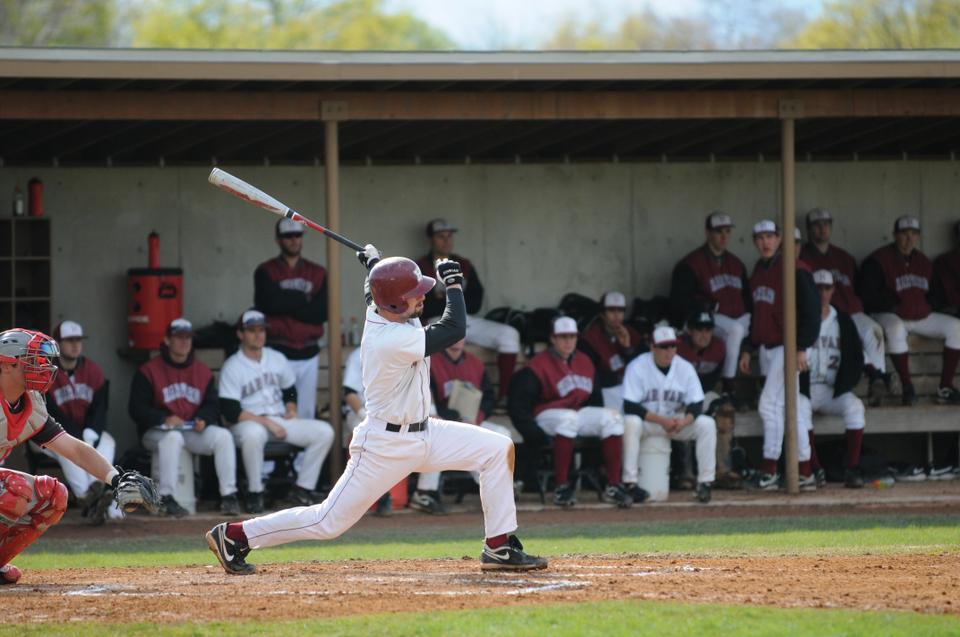 Junior shortstop Sean O’Hara, shown here in earlier action, had a big afternoon at the plate, tallying three extra-base hits and driving in six RBI in the first game of a doubleheader against Yale. Although Harvard won the early game, 14-12, it could not get its bats going in the nightcap and lost, 8-3. By Meredith H. Keffer
By Max N. Brondfield, Crimson Staff Writer

In the major leagues, playing at .500 will leave you short of the playoffs. The Crimson may earn the same fate if it continues to split doubleheaders.

The Crimson’s offense started hot, cruising to a 13-0 lead in the first three innings of the earlier game and holding on for the win. But it was Yale that sustained its level of play, riding strong hitting at the end of the first contest to a solid opening in game two. With a seven-run lead of its own four innings into the nightcap, the last-place Bulldogs assured themselves an even day.

“We didn’t come out. We didn’t have the same fire,” junior captain Tyler Albright said of the second game. “We weren’t able to stop them.”

Although the Crimson looked to have the momentum after taking the first contest, the Bulldogs did not seem discouraged after outscoring the visitors, 9-1, in the last four innings of game one.

“[Yale’s] bats rolled right through. They kept on going the next game,” Albright said. “It took us awhile to get into it.”

By the time the Harvard plated its first run, the Bulldogs had already amassed a 7-0 lead against rookie Andrew Ferreira and sophomore Will Keuper. In a stark contrast from game one, walks plagued the Crimson early, as Ferreira issued four free passes in 2.2 innings of work. Twice, Yale baserunners orchestrated a double steal after walks, setting up easy scoring opportunities.

Harvard’s fortunes appeared to turn in the top of the fifth, when sophomore Marcus Way belted the first pitch he saw over the right-field fence to put the Crimson on the board. Following a scoreless inning from Keuper, Harvard plated two more runs on back-to-back one-out singles with runners in scoring position from juniors Sam Franklin and Sean O’Hara, closing the gap to 8-3. Albright followed with a double play, though, and the Crimson would not score again due to effective pitching from Bulldog hurler Christopher O’Hare.

“We weren’t able to hit their starter very well,” Albright said. “He was throwing strikes, and we couldn’t put it in play well.”

O’Hare lasted 6.1 innings, yielding just three earned runs on no walks and a pair of strikeouts. Yale’s Chris Finneran worked 2.2 innings of scoreless relief to seal the victory for the Bulldogs.

The Crimson bats started the day scorching, as Harvard pounded out five first-inning hits that chased Bulldog sophomore Pat Ludwig after just two-thirds of an inning. Ludwig was tagged for five earned runs and yielded three walks as well before getting the hook.

But a pitching change did nothing to slow down the Crimson offense, as the visitors put up eight more runs over the next two innings. Most of the damage came from O’Hara in the cleanup spot, who belted doubles in the first and second innings and a bases-clearing triple in the third for a total of six RBI.

“[O’Hara] hit really well in the first game—he was hot,” Albright said. “It seemed like every time he came to the plate he had a big hit.”

“He was unbelievable,” sophomore Brent Suter added. “He’s one of those hitters who, when he’s hot, you do not want to pitch to him.”

Plenty of other Harvard batters got in on the action too, with senior Dan Zailskas lining a two-run single to left field in the top of the first and Albright notching a pair of RBI singles in the second and third. All told, the Crimson had staked junior starter Max Perlman to a 13-0 lead before he even broke a sweat.

And Perlman—who continued to show recovery from elbow surgery with his longest outing of the season (63 pitches)—took full advantage. After yielding a leadoff single in the bottom of the first, the Harvard hurler promptly picked off Yale leadoff man Cam Squires and retired the next four batters he faced. Perhaps the best sign for Perlman was the junior’s ability to throw strikes consistently. Of his 63 pitches, 48 crossed the plate.

“He looks good and feels confident,” said Albright, who caught the entire doubleheader. “The first few innings he was dominant, throwing strikes on the first pitch.”

Unfortunately for Perlman, the Bulldogs began to hit those strikes in the third. Following a pair of singles, Squires bounced back from his baserunning blunder with a two-run triple and scored on a single by junior Andy Megee. Yale then posted another four runs in the fourth inning, closing the gap to six. When slugger Trygg Larsson-Danforth followed a Megee single with a two-run bomb to open the fifth, Walsh called for junior Eric Eadington to preserve the Crimson’s suddenly precarious four-run lead. But Eadington yielded four consecutive singles, finally stopping the onslaught with a double-play ball and a strikeout after the Bulldogs had pulled within 13-11.

The teams traded runs in the sixth inning, with Way scoring on a single from senior Chris Rouches and Larsson-Danforth launching a solo shot for his second home run of the game. With the game on the line, Walsh turned to sophomore Brent Suter, who bent but did not break in the bottom of the seventh. Despite yielding a pair of one-out singles, Suter induced a ground ball and forced Gant Elmore to fly out to right field, preserving the win for Harvard.

“It was the first time for me coming out of the [bullpen], so I was a little nervous out there,” Suter said. “But I was able to settle down, throw strikes, and let the defense work behind me, which they did.”