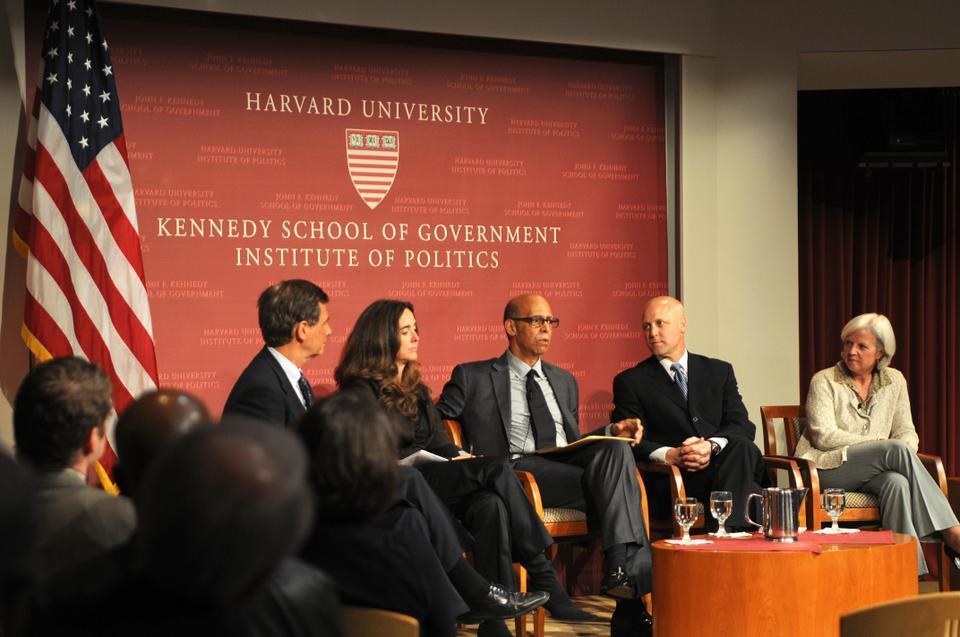 Stephen Goldsmith, Daniel Paul Professor of Government at the Kennedy School, moderates a conversation about social innovation in government.
By Stephanie B. Garlock, Crimson Staff Writer

In the quest to achieve meaningful social change in American cities, failures are inevitable—and even necessary—said Louisiana Lieutenant Governor Mitchell J. Landrieu and several other panelists at a discussion of social innovation at the Institute of Politics yesterday.

“I guess that’s going to fall on mayors to say that you are going to be willing to take a hit in the public eye if something doesn’t work,” said Landrieu, who is also mayor-elect of New Orleans. “When it gets to be a bad thing to fail, that’s when we’re going to stop innovating.”

Gibbs said she uses this model of risk-taking in her work, adding that of the 40 pilot programs begun under New York City Mayor Michael Bloomberg’s $200 million social innovation fund, six have been integrated into the budget, while eight or nine have been retired.

But the political unpopularity of failed programs funded by tax dollars presents a major obstacle to change, according to Lomax.

Panelists at last night’s event, part of this semester’s Public Service Week at the Kennedy School, also emphasized that organizations must both produce concrete results and energize citizens in order to create long-term programs.

“People on the ground level need to not be OK with the status quo if we’re going to institutionalize innovation,” Lomax said. “What I worry about the social innovators is that they’re not deeply rooted in the communities in which they serve,”

Max A. Noonan-Pomada, who works at a Boston elementary school through the AmeriCorps program City Year, said that he was “reinvigorated” by the panelists’ commitment to social change.

“We’re on the super ground level all day,” Noonan-Pomada said. “It can feel like you’re doing the work without people at the top championing your cause.”

But Anthony R. Britt ’10 said he worries that the panelists’ focus on new innovations takes their attention away from older programs that have proven successful such as Teach for America, where Britt will work next year.

Last night’s panel, co-sponsored by the Ash Center for Democratic Governance and Innovation, is the final product of two years of sustained discussion among social innovators organized by Goldsmith and the Kennedy School. These conversations have also contributed to Goldsmith’s book “The Power of Social Innovation,” released this week.