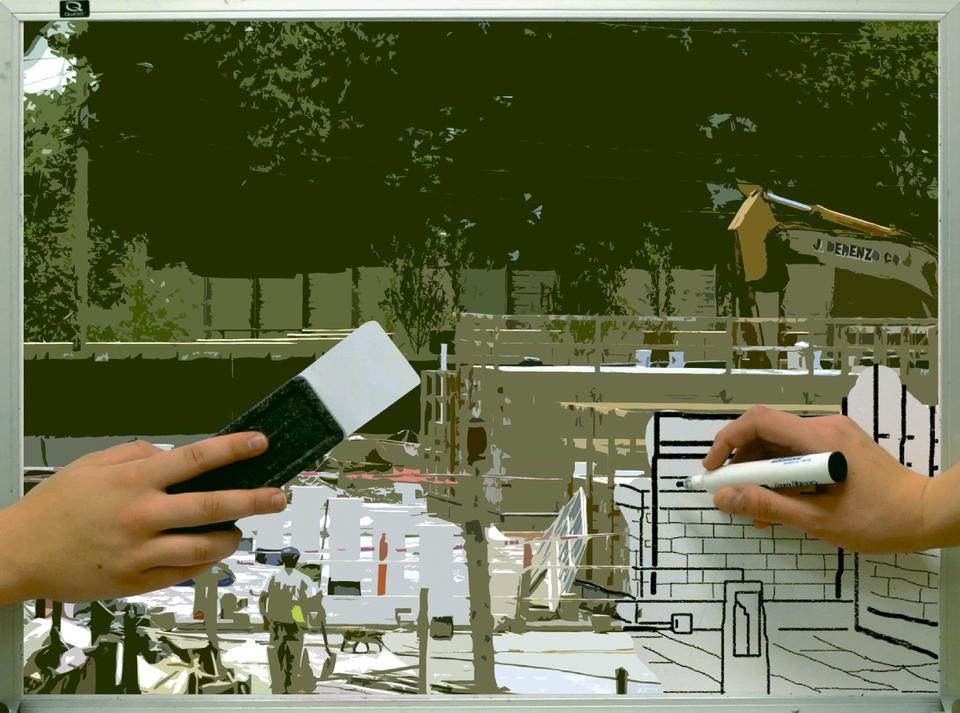 It was supposed to be a world-renowned nexus of interdisciplinary science research, intended to house the University’s recently-created Stem Cell and Regenerative Biology Department and the Harvard Stem Cell Institute.

Instead, the plot of land set aside for the Allston Science Complex is a paved-over eight-ton steel foundation, surrounded by a wooden fence and some newly planted greenery.

Western Ave., residents say, feels more like an abandoned industrial park than the “Main Street” community they were promised.

So when the University announced an indefinite halt on the construction of the Allston Science Complex, citing unforeseen financial calamities, there remained a consensus that merely beautifying what some Allston residents deride as “Harvard’s gaping hole in the ground” is far from an acceptable fix.

But administrators maintain they have not in fact, as some residents have charged, abandoned the $1 billion project, and the Allston Work Team—the faculty-led group Faust created following the Dec. announcement—is currently investigating the possibility of collaborating with other institutions going forward.

The term “co-development” has been bandied around in the past few months as the first concrete solution to Harvard’s woes in Allston.

But the proposal raises more questions than it answers, as introducing additional stakeholders in what is already a tangle of competing interests may further complicate matters.

If the University decides to adopt this approach, co-development would require a delicate touch. Harvard would need to pin down its academic and financial goals, find a suitable partner, and enter the market at the right time.

At this point, all options are open, and Harvard has not decided what type of relationship it seeks or whether co-development should even happen, University Executive Vice President Katherine N. Lapp says.

“We’re not sure what will come our way as we start to talk to outside potential partners, so we don’t want to say we’re going to do one thing and foreclose a possibility somewhere else,” Lapp says.

But what is clear is that the University must proceed with caution.

“Some of the things that [other universities] stressed for us are when you pursue these types of arrangements be very clear, get as much expert advice as you can, and make sure whoever you’re working with shares your aspirations and your principles,” Lapp says. “When those things don’t connect, it will not proceed well.”

Finding the right partner, in addition to developing at the right time, will be key to successful co-development, University officials say.

Looking back on the experience of real estate developers, the landscape of attempted collaborations on construction projects is rife with failure.

Real estate consultant Karen Backus, who specializes in working with universities and non-profits, presented members of the Work Team with 12 unsuccessful cases of co-development out of 15 projects on which her firm has consulted at a teach-in at Harvard Business School earlier this month.

Since co-development could indicate either a purely financial collaboration between a real estate developer and an institution or an intellectual union—a pharmaceutical firm and a university lab, for example—University administrators stress the importance of identifying synergies between Harvard and any potential partner.

Private firms may want to jump on any opportunities more aggressively than can a large university with a myriad stakeholders. Even when working with firms with similar goals, fostering scientific collaboration, as history shows, requires more than physically bringing together top researchers.

“A major concern in the sciences is that Harvard scientists and private sector scientists who eventually cohabitate a neighborhood might never see or talk to each other,” University Provost Steven E. Hyman says.

For instance, the opening of the Merck research facility near Harvard Medical School has generated “little enrichment of the local intellectual environment,” a University official says—the opposite of what Harvard would hope to achieve.

The few successful collaborations have generally involved a university project that generates steady profits, such as housing or retail, according to Backus. Building a project around a more nebulous theme like biotech, though, tends to be more difficult to implement.

But even success stories can harbor cautionary tales.

But it took over two decades to complete the project, says urban design advisor Gayle B. Farris, and neither Forest City nor MIT would be inclined to arrange a similar agreement.

“That tells you how challenging it is to do this,” Farris says.

IF YOU SEE THE SCIENCE COMPLEX, SAY HELLO

While co-development may allow the construction of the Science Complex to progress beyond its currently paved-over foundation, there are no guarantees that the project will follow original plans to house stem cell researchers, Lapp says.

“We are making sure that we accommodate [the Stem Cell Institute’s] needs, we want the research to continue and grow,” says Lapp. “But keep in mind, the whole Allston vision, the whole Allston plan is a long-term plan, so there’s going to be growth in a variety of research areas—whether it’s stem cells or something else—that will have to be accommodated.”

Bringing in a new partner means that Harvard would need to integrate the goals of another institution with its own, and while the University has not yet proposed any specific partnerships, potential compromises are on the table.

“[Harvard] understands that with working partners, some level of control needs to be minimized or shared,” Work Team Co-Chair Alex Krieger says.

Reeve says he does not know whether the Stem Cell Institute would fit into a co-developed Science Complex.

“In theory, yes, we’re open to it, but in practice it depends with whom and how,” Reeve says.

TANGLED UP IN COMMUNITY RELATIONS

The City of Boston and the Allston community, anxious to get the development process back on track, nevertheless hold Harvard to its original promise of building a vibrant community across the Charles. Support for a potential experiment in co-development comes with conditions attached.

Allston Neighborhood Coordinator Daniel Roan writes in an e-mail that the City of Boston would be “open” to the idea so long as it promotes “the development of well planned and financially sound development in Allston that expands economic opportunity, improves the quality of life for the neighborhood and increases housing choice.”

Allston residents, while excited about the prospect of progress, remain wary of allowing a large biotech company to set up shop on what would have been the Allston campus.

“If they’re bringing in partners, commercial partners, I worry that some of these publicly-motivated design concepts may drop away,” Allston resident Brent Whelan says, referring to the original plan to integrate the Science Complex into the community with coffee shops, public atrium spaces, and even a small science museum.

As Harvard explores new plans—which must be approved by city regulators—it must contend with a tarnished reputation among the Allston community.

Allston residents say they have been largely kept out of the decision-making process and know little about the proposal, though Harvard-Allston Task Force members were invited to the information session at the Business School.

Since the halt of construction on the Science Complex, the Task Force has not held a public meeting—though one was announced last week for June 7—and the Work Team has only met once with the Task Force to discuss the future of Allston.

“We’ve basically been frozen out,” Whelan says, noting that a much higher level of dialogue existed before construction came to a stop.

But some residents say that a chance to reexamine the plans, which would be required by the city, might be beneficial.

“Time is a good generator of creative ideas,” says Allston resident Tim McHale, adding that he hopes that a completed Science Complex “would bring new energy to the community.”

Recognizing concerns from all parties affected by construction in Allston, Hyman says he nonetheless remains “cautiously optimistic” about the prospects for co-development. But administrators emphasize the need to maintain a long view of the project’s future.

“As you make determinations, you really have to make sure you’re making the right decisions in the long term, as well as the near term, because these are ones that you’re going to live with as an institution and as a neighborhood for many years to come,” Purcell says.

—William N. White contributed to the reporting of this story.