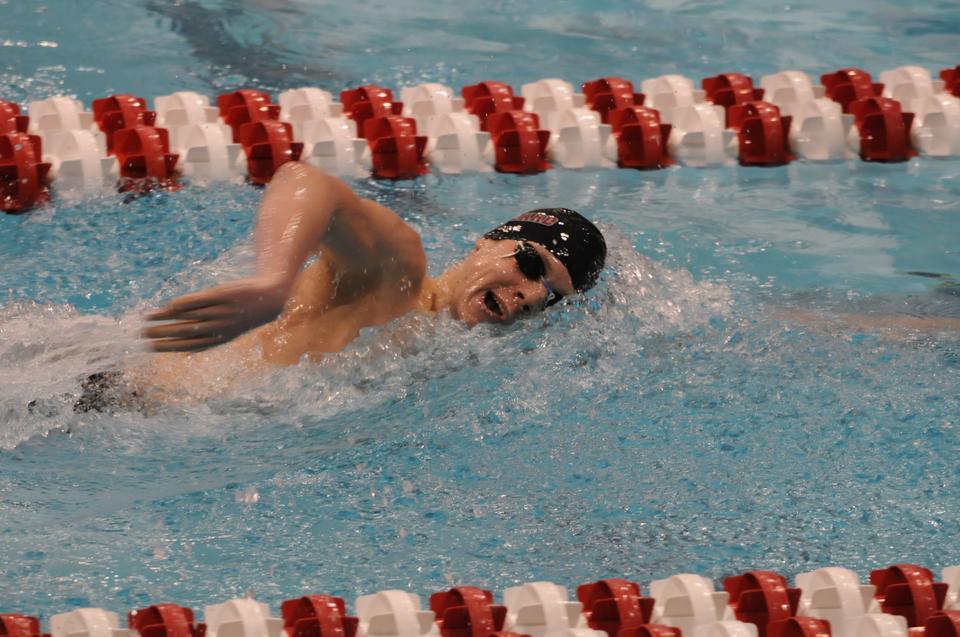 Co-captain Alex Meyer led the Crimson men’s swim team to another strong season, in which the squad finished second to Princeton at the Ivy League Championships once again. Meyer ended the season on a high note, placing 14th in the 1,650-yard freestyle at NCAA’s to earn All-American honors.
By Steven T. A. Roach, Crimson Staff Writer

Despite having a relatively young squad with only six seniors, the Harvard men’s swimming and diving team managed to make a big splash in the Ivy League this year.

Completing the season with a 7-2 overall record, the Crimson dropped only one meet against Ivy competition, culminating in a second-place finish at the Ivy League Championships. With four athletes named to the All-Ivy team, the squad capped off the 2009-10 season in style.

“I think we performed better than last year,” rising co-captain Douwe Yntema said. “We had a good group of guys this year, and the few seniors that we had were very good and showed tremendous leadership.”

Harvard dove right into the season with a home meet against Texas A&M. Despite losing, 131.5-102.5, the team still had some successful individual finishes. Senior Mason Brunnick began with a win in the 500-yard freestyle. Freshman Owen Wurzbacher opened his Crimson career with a first-place finish in the 200-yard breaststroke, barely beating his teammates, juniors Justin Davidson and Evan Schindewolf.

Harvard did not let this loss set a precedent for the rest of the season. Just a day after the defeat against the Aggies, the Crimson traveled to Ithaca, N.Y., blowing Cornell and Dartmouth out of the water, 177-123 and 237-63, respectively.

Harvard captured nine events on the day and used this momentum to gain a 167-133 edge over Columbia the next weekend and finish off its New York tour.

“That was a real positive weekend, and it gave us confidence going into the rest of the season,” co-captain Tommy Gray said. “It was great to start out on the right foot.”

The Crimson faced stiffer competition at the Georgia Invitational, going up against Georgia, Auburn, Denver, and Florida.

Despite a fourth-place team finish, co-captain Alex Meyer emerged as a standout at the event, taking fourth in the 1,650-yard freestyle.

In the middle of its season, Harvard held a 3-1 record but needed to improve for the second half to match last year’s results. And then, from the most unlikely of sources, came a solidifying event for the squad: J-Term.

“Surprisingly, I’d say J-Term led us to come together the most,” Yntema said. “While everyone else was away, we were still on campus training very hard, and that allowed us to have a renewed focus and improve.”

“[J-Term] was the turning point of the season for us,” Meyer added. “After that, everyone was on the same page and we were more productive for the rest of the season.”

Freshman Michael Stanton took the title in the three-meter diving competition against Penn and in the one-meter eventagainst Brown.

Coming off of these three wins, Harvard moved into the most anticipated part of its season—the competitions against its toughest Ivy rival, reigning conference champion Princeton. At the annual HYP meet, the Crimson dominated Yale, 242-106, but fell to Princeton, 203-150. It was Harvard’s first loss against an Ivy competitor on the season.

The Crimson rebounded from this defeat, taking second place at the ECAC Championships. Schindewolf won the 400-yard individual medley, while sophomore Nicholas DuCille claimed second in the 50-yard freestyle.

With this success, Harvard had another chance to take down the Tigers but again fell just short, taking second at the Ivy League Championships. Meyer had another solid performance for the Crimson, grabbing titles in 500-yard, 1,000-yard, and 1,650-yard freestyle races.

“We were a little disappointed we didn’t win the Ivy League Championships this year,” Meyer said. “Beating Princeton is a top priority, but we had some good individual standouts and performed well.”

Meyer continued this run at the NCAA Swimming and Diving Championships, taking All-American honors and 14th place overall with a time of 14:58.13 in the 1,650-yard freestyle.

With a successful season completed, Harvard looks to prove itself against a strong Ivy League field next year, especially rival Princeton.

“The plan is for all of us to improve for our individual best times,” Yntema said. “We have a renewed focus and a strong team for next year.”