Harvard at the New Frontier 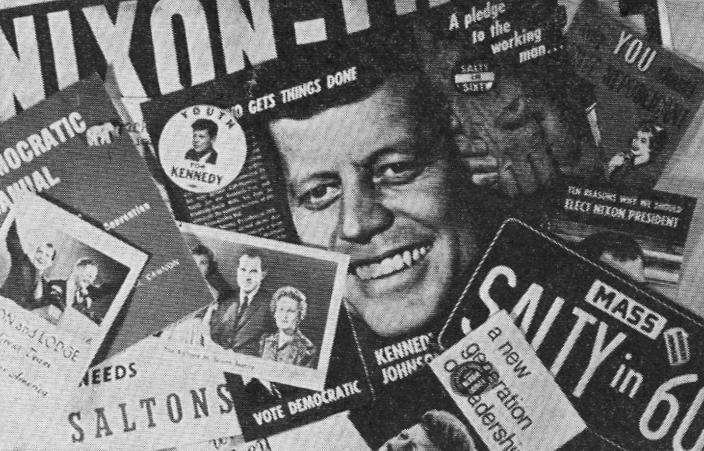 October 5, 1960. Voter registration --held in Cambridge at the police station on Green St. --closes this Friday throughout Massachusetts. College students over 21 who have lived in the state for a year and in the city for six months, are not supported by out-of-state parents, and register for a car in Massachusetts, may be eligible to vote here. All non-permanent residents must present their cases to the election commissioner for a decision. About 20 states permit registration by mail, and half of them have not passed their deadlines for registering. At least one club, the Students for Nixon, provides information on deadlines and procedure at its offices at 52 Dunster St., weekdays from 2 to 4 p.m.
By Julie M. Zauzmer, Crimson Staff Writer

Election season was in full swing, and students at Harvard and across the nation were passionately supporting a youthful candidate for president who spoke to them with eloquence and charisma, and who even carried a Harvard degree. Cambridge hosted heated debates, partisan speakers, and plenty of student volunteers distributing leaflets and voter registration information. Issues ranging from the candidates’ stances on national security to levels of political experience were discussed in classrooms and common rooms across campus.

Many current Harvard students might recognize this scene from 2008. But to students from an earlier era, these images conjure up memories of another campaign—the presidential election of 1960, when John F. Kennedy ’40 ran for president against Richard M. Nixon.

According to polls taken by The Crimson in 1960, students and faculty leaned heavily in favor of Kennedy.

“He was young; he was charismatic. It looked like a new frontier,” said former Crimson editor Peter S. Britell ’63, echoing Kennedy’s campaign theme. “It was very, very inspirational.”

Among undergraduate and graduate really identified with the Kennedy campaign, even those who weren’t actively involved.”

At this point, many of those young people could not yet vote—the voting age wouldn’t be lowered from 21 to 18 for another ten years—but excitement still ran high among many non-voting students. Some sported buttons reading “If I Were 21, I’d Vote for Kennedy.”

Kennedy’s ties to the College also endeared him to Harvard students.

“It was not unusual in 1958 and 1960 to see his brother and mother and sister all over Harvard,” Smith said.

Just six days before the election, Kennedy—who served on the Crimson business board and swam on the varsity swim team during his undergraduate years—spoke via telephone connection from California to an overflowing crowd in Sanders Theater.

“You’re the only audience in the United States that can understand my accent,” he jested to the enthusiastic students.

Many students took action on their preference for one candidate or the other by volunteering for one of the campaigns.

Members of the Young Republicans handed out leaflets supporting Nixon in a local supermarket; the Harvard Young Democratic Club distributed flyers in the subway.

Supporters of both parties picketed polls to persuade undecided voters at the last minute, and a voter registration drive sought to sign students up to vote via absentee ballot in their home states.

“In 1960...the action was on the Democratic side,” recalled Congressman Thomas E. Petri ’62, though he was involved in the Young Republicans and Students for Nixon.

But many alumni from the Republican side also remember campaigning vigorously.

“We organized meetings and held rallies and wrote articles,” said Howard Phillips, who participated in Republican organizations at Harvard and on the national scene as a student, and has since run for president three times himself as a third-party candidate.

Student campaigning stretched beyond Cambridge, too.

The Crimson reported at the time that the Young Democrats took the unprecedented step of taking “complete charge of the campaign in the four precincts adjacent to the University.”

Phillips and three fellow Harvard students went even farther afield—they took a cross-country polling trip in the summer of 1959, assessing the strength of the candidates in 17 different cities before presenting the results of their work—which predicted that Nixon would win “overwhelmingly”—to Nixon at the national Young Republican convention in Denver.

Christopher T. Bayley ’60, who served as president of the Young Republicans at Harvard, said that groups of about 25 students would make trips to New Hampshire on weekends, ringing doorbells to drum up votes in the upcoming Republican primary for either Nixon or his opponent Nelson A. Rockefeller.

Despite his own Republican leanings, Bayley acknowledged that Kennedy generated much more excitement among his fellow students. “Very few people were emotionally enthusiastic about Nixon,” he admitted.

Many alumni recalled a particularly colorful incident which elicited high emotions from both sides. In the spring of 1960, students said, Adlai E. Stevenson—then a potential Democratic nominee—remarked that the U.S. should apologize for the presence of an American U-2 spy plane which had been shot down by the Soviet Union.

The Young Republicans staged a march to the post office on Mount Auburn Street, where they planned to mail Stevenson an umbrella, a symbol recalling Neville Chamberlain’s appeasement of the Germans at Munich.

The Democrats organized what Congressman Barney Frank ’61, a member of the Students for Stevenson group, called “a counterpicket.”

Some alumni recalled that the Democrats mailed President Eisenhower a pair of suspenders because, as Petri put it, they thought that “the country had been caught with its pants down.”

Four students and two passersby were arrested for disturbing the peace during the demonstrations. The students, who returned to their dining halls that night, were met with raucous approval, The Crimson reported at the time.

“Oddly, there was great solidarity between the Young Republicans and the Young Democrats,” said Bruce K. Chapman ’62, then head of Students for Rockefeller, about the aftermath of the arrests. “They were all against the police.”

“Honestly, I think there was more openness to competition, even though an overwhelming number of the students as well the faculty were for John Kennedy,” Chapman said. “There was geniality about the election and a pretty serious respect for both sides.”

ENGAGED TO BE LED

Despite the drama of arrests in the Square, some said that engagement in politics among the student body as a whole was not very deep.

“The campus was considerably less politicized than it is now,” said Britell, who reported on the campaign. “Students didn’t necessarily have strong political viewpoints or have a long list of policy issues that they cared about. They liked [Kennedy] because he was a charismatic figure and he was a shining light.”

The preceding decade had not been one of student activism anywhere in the country, some alumni remembered. In the aftermath of trauma of World War II, many said that the country turned away from politics.

The students who were on campus at this time mirrored the rest of the country in this lack of political engagement.

“Looking back on it now, I’m embarrassed and regretful at how removed from it all we were in many ways,” remarked Frederic L. Ballard, Jr. ’63, who also helped cover the campaign for The Crimson. “I wish the temper of the times, I wish the academic culture of the time had been to be more connected with the real world.”

Some alumni said that the faculty were far more interested in the campaign than students were. Several faculty members, including Dean of the Faculty of Arts and Sciences McGeorge Bundy and Professors Arthur M. Schlesinger and John Kenneth Galbraith, went on to join Kennedy’s administration.

“There was more activity among the faculty,” concurred Frank. “I don’t remember a lot of student activity.”

Meanwhile, when Radcliffe students gathered to watch the first debate between Kennedy and Nixon—the first televised presidential debate in history, which is remembered as a seminal moment in which Kennedy displayed his confident, well-spoken demeanor to the nation—the Radcliffe students were not impressed.

According to a Crimson article about the event, several students fell asleep, and one said she would have rather been playing bridge. The writer, Jonathan R. Walton ’63, blamed the low enthusiasm on the fact that “both candidates lack any real flair as speakers.”

Yet for the students who did immerse themselves in politics, the 1960 election provided plenty of drama—and in some cases catalyzed a lifetime of political involvement.

Recalling Senator Joseph R. McCarthy’s charges of communism in the government, the Brown v. Board of Education decision and its aftermath, and the widespread fear of a nuclear attack, former Crimson editor Mark H. Alcott ’61 said that the era does not deserve its placid reputation.

“You put that all together and there was a lot of ferment in this period,” he said. “In any case, I think much of that did center on the 1960 election.”

Smith said he agrees that this election made a powerful impact on the youth of the age: “As [Kennedy] said, the torch had been passed to a new generation.”