Will Smith To Produce Biopic on Harvard Prof 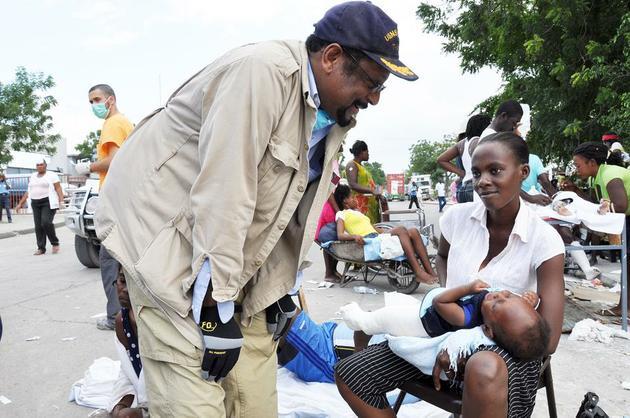 The explorations of Harvard Foundation Director S. Allen Counter, pictured here in Haiti following the devastating earthquake in January, will be the subject of a biopic to be released in 2011.
By Rediet T. Abebe, Crimson Staff Writer

The scholarly expeditions undertaken by modern-day explorer and Harvard Foundation Director S. Allen Counter will be featured in a biopic produced by actor Will Smith.

In an e-mailed statement to The Crimson, Counter said that the film is slated for release in late 2011 and will be developed by Overbrook Entertainment and Sony Pictures—both of which are declining to publicly discuss the project. Debbie Allen is also producing the film, and Farhad Safinia will be penning the script, Variety magazine reported.

Counter, a neurology professor at Harvard Medical School, said he is “flattered” that Smith—the star of multiple blockbuster movies and a producer with big-name projects under his belt—will be working on the biopic, which will focus on Counter’s scientific explorations abroad.

Counter said that Debbie Allen described his character as “a mixture of Indiana Jones and Robert Langdon,” the fictional Harvard professor of symbology in Dan Brown’s novels.

Colleagues who learned that Counter’s life would be turned into a biopic emphasized the multi-faceted nature of a man who has gained the titles of neuroscience professor, humanitarian, mentor—and even the Consul General of Sweden in Boston and New England.

“Some people think that Allen Counter is one person,” said Harvard Extension School Dean Michael Shinagel, who is on a faculty advisory committee in the Harvard Foundation. “He is a combination of several workers at once.”

“Instead of trying to teach them his ways, he’s learning from them,” said Entomology Officer of Environmental Health and Safety Gary D. Alpert, a colleague of Counter. “He’s what you would call a social anthropologist.”

The 2011 biopic will not be the first time Counter’s life and work fall before the camera. In 1978, his explorations led to the production of an award-winning documentary called “I Shall Moulder Before I Shall Be Taken,” which studied the culture and history of the indigenous rainforest people in Surinam in the 1870s. Other documentaries followed, such as “Lost Africans in the Andes” and “I Sought My Brother.”

Between 1993 and 2000, Counter led medical teams into the Ecuadorian Andes Mountains to study the health problems of indigenous children and to provide medical services. Currently, he is working to reduce the severe lead and mercury poisoning found among the children in the ceramics glazing and gold mining areas of Ecuador.

“It’s hard to name a single person who has done as much work in 30 years,” said William A. Graham, dean of the faculty at the Harvard Divinity School, about his colleague.

Nearly 30 years ago, former University President Derek C. Bok and Reverend of Christian Morals Peter J. Gomes appointed Counter to the directorship of the Harvard Foundation for Intercultural and Race Relations, which seeks to improve intercultural understanding, equality, and peace within the University by sponsoring and conducting over 200 student and faculty programs each year.

“The Foundation is very much created out of personality and dedication,” said Biology Professor David Haig, who works with Counter at the Foundation. “The unique part that he’s done is to recognize groups without allowing them to become isolated in separate centers…There is no equivalent in most other colleges.”

In addition to his scholarly work, Counter has served as a mentor for students and has taken groups on trips to Louisiana to assist his medical relief team in the wake of Hurricane Katrina and to remote areas of South America.

Counter is currently working to establish the first memorial to African-American slaves, and has been petitioning President Barack Obama about the establishment of the American Slavery Memorial on the historic Washington Mall in D.C.

“He has done it for so many years that we almost take it for granted,” Shinagel said of Counter’s work on behalf of minorities. “If and when he retires, you’ll end up having to hire six people.”

—Staff writer Rediet T. Abebe can be reached at rtesfaye@college.harvard.edu.