In Yard, A Carnival for All

Tercentenary Theatre plays host to bull-riding and cotton candy as undergraduates eat food, dunk friends and administrators, and be merry 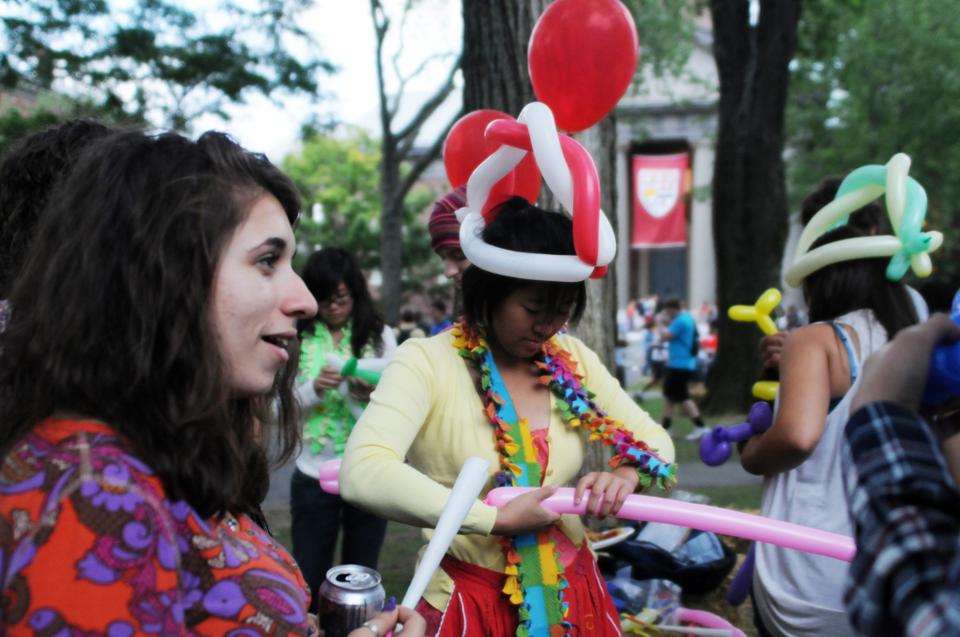 Students wrestled with a mechanical bull, feasted on nachos and corn dogs, and battled for victory in a human foosball game at the Harvard Carnival on Friday.

Around 4,000 undergraduates attended the sixth annual welcome-back event in Harvard Yard, organized by the College Events Board, according to Fellow for Student Life Andres Castro Samayoa ’10.

Clowns scattered across Tercentenary Theatre twisted balloons into animals and hats. Near University Hall, a cotton candy machine made stick after stick of the sugary treat. A magician performed card tricks for clusters of students seated on bales of hay. As pop hits boomed from speakers, students whirled hula-hoops around their hips and ate rainbow-swirl lollipops.

Across from Widener Library, an ever-present line of eager students waited for one of the carnival’s main events: a mechanical bull that jerked and bucked until its rider fell onto a padded surface.

Brian A. Riemer ’12, a carnival attendee, managed to stay on the bull for about a minute, he estimated.

Carnival games like Skeeball rewarded winners with tickets that could be redeemed for prizes: stuffed animals, inflatable guitars, and an official Harvard Carnival t-shirt, the grand prize worth 50 tickets.

Since only Currier and Mather House dining halls were open, trucks parked on either side of Emerson Hall stored food that had to feed most of the campus. Two parallel rows of tables were host to various forms of barbecue fare: pretzels, nachos, corn dogs, pasta salad, and sandwiches.

Organizers said that they were happy with both the turnout and the ambiance of the event even though they had to postpone it for a week due to Hurricane Earl, a storm that threatened the Cambridge area but proved to be a no-show.

“I thought it was disappointing that we had to push it back a week,” said CEB vice-chair Stephen G. Anastos Jr. ’11, adding that he was happy with the turnout for the carnival.

“People seemed to hang around for a while, and that’s the best indication,” said Anastos, who said his blockmates “came out in full force” to drench him at the dunk tank.

But every year’s welcome-back celebration has a similar purpose.

“It’s really nice to have an opportunity for everyone, from first-years to seniors, to come together,” said Castro Samayoa.

—Staff writer Naveen N. Srivatsa can be reached at srivatsa@fas.harvard.edu