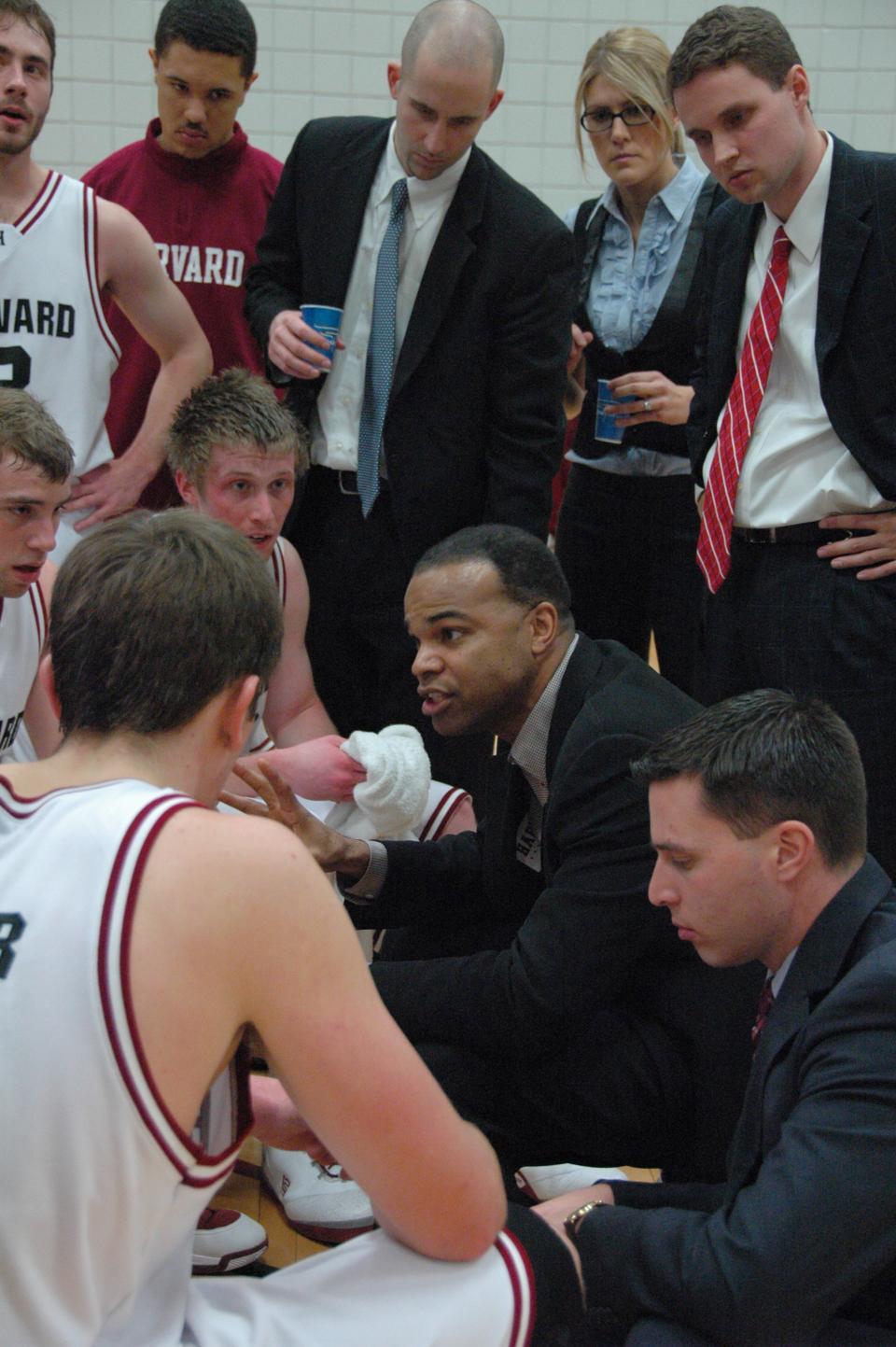 No matter one’s opinion of Harvard men’s basketball coach Tommy Amaker and his recruiting tactics, there is no disputing that the former Michigan and Seton Hall coach is committed to establishing a fresh legacy for a historically-middling Crimson program.

Just one year ago, Amaker and his staff welcomed to campus five prospects the likes of which are rarely seen in the Ivy League. Dwight Powell and Rod Odom, both among the top 100 players in the nation, were joined on official visits by marksman Austin Carroll, big man Majok Majok, and seven-footer Ugo Okam.

Only Okam eventually became a member of the Harvard class of 2014. Though the Crimson was one of Powell’s final three schools, and Odom maintained strong interest, in the end Amaker proved unable to win multiple recruiting battles with high-major BCS schools.

Harvard still managed to do quite all right: Okam is joined on the roster by highly-rated rookie Laurent Rivard, and the Crimson’s five-player haul is arguably once again the best in the league. But Amaker has made his ambitions clear: he aims to capitalize on the university’s name and generous financial aid in order to steal prospects from conferences far more prestigious (athletically) than the Ancient Eight.

While he may have failed to hit a home run last year—and in July even elected to acknowledge a secondary recruiting violation that occurred in the summer of 2007—it appears that the former Duke star is ready for another try at making a national splash, just a few months before the beginning of his fourth season at the helm of Harvard.

This upcoming weekend—which will, like last year, feature the home opener for the Crimson football team—a strong crop of prospects will be once again visiting Cambridge and exploring all that Harvard has to offer.

The group is headlined by Kenyatta Smith, a 6’8, 275-lb big man at Flintridge Prep School (La Canada Flintridge, Calif.). Harboring ambitions of attending medical school, the post prospect has a final three of Vanderbilt, Penn, and the Crimson. He will visit Vanderbilt next weekend.

Rated a 90 by ESPN, which has him ranked as the No. 29 center in the nation, Smith attended the NBA Top 100 Camp in June and has the potential to make big waves in the Ivies—especially critical for Harvard, severely lacking in front-court depth.

“The size and tools are there,” Scout’s Dave Telep wrote of Smith. “Once he turns up the intensity and becomes comfortable as a force in the paint, he’s got a chance to have a strong college career.”

“They’ve been after Kenyatta for quite some time now, so I think he’s got a good relationship with the coaches, from Amaker down to coach [Brian] DeStefano, [Yanni] Hufnagel, and [Kenny] Blakeney,” said Garrett Ohara, Smith’s high school coach. “He’s really comfortable with them, and obviously the school is a great place. He’ll enjoy his visit out there, and he told me he enjoyed meeting some of the players on an unofficial visit last year.”

“He’s gotten close with the Penn staff as well,” Ohara added. “Vanderbilt came in a little bit later...the relationships with the coaches will be very important to him.”

Smith, who was unable to be reached for comment, will be joined this weekend by a pair of promising back-court prospects.

A senior at White Station High School (Memphis, Tenn.), Andre Hollins has the Crimson among his final five. Hollins, who is rated as a three-star prospect and No. 30 at his position by Scout and No. 126 in the nation by Rivals, sounded excited to talk about Harvard in an interview last week.

“[Their] academics [are among] the best in the world—I know I can’t go wrong there,” Hollins said. “Athletically, they’re doing some good things.”

Hollins made a visit to Auburn two weeks ago—which he reportedly described as “perfect”—and next month the 6’2.5”, 195-pound guard will be visiting the campuses of his other three choices: Ole Miss, Minnesota, and Stanford. On Monday, his Facebook page said, “Enjoying my home visit with Stanford coaches.”

Hollins has said he plans on making a decision in early November, after his visits and before his high school season begins.

Spencer Dinwiddie, a senior at Taft High School (Woodland Hills, Calif.) also has the Crimson as one of his leaders.

The 6’4.5”, 175-lb. point guard said early last week his final schools are Santa Clara, Harvard, Oregon, Colorado, Georgetown, UNLV, and Stanford. He currently holds offers from all of them except for Georgetown.

On his Facebook page last Friday, Dinwiddie said, “Colorado visit waz real kool..they def deserve to be in the list with Harvard and Oregon.”

“I got 6 but those 3 kinda separated themselves,” Dinwiddie also commented. He said yesterday that UCLA may be trying to re-recruit him.

Dinwiddie is rated a four-star recruit by ESPN and No. 29 at his position in the nation by Scout. Named the MVP of the Adidas Super 64 tournament in late July, Dinwiddie is ranked as the No. 8 player in the state of California by Cali High Sports, which called him “the best passer on the West Coast.”

“I definitely have the best relationship with the Harvard coaches out of all of them,” Dinwiddie said. “[Assistant coach Yanni Hufnagel] and coach [Tommy] Amaker have been very diligent in my recruitment. I’ve kind of grown attached to them, so it’ll be hard not to choose them. I also think the way they try to get up and down fits my style. And they say if I work hard, playing time will be there, and I’ll have the opportunity to start by the end of freshman year.”

Dinwiddie said he plans to sign during the early signing period in November.

The other confirmed weekend visitor to Cambridge is Steve Moundou-Missi, a 6’6, 225-lb combination forward from Montverde Academy (Montverde, Fl.) The Cameroon native, who came to the United States two years ago, said last week that he is interested in the Crimson, Brown, Princeton, Yale, Stanford, and Vanderbilt. He currently has offers from Brown, Morehead State, and Harvard, but has no favorite and no other visits planned.

Amaker is looking to add to an existing recruiting class of one: Jonah Travis (Minneapolis, Minn.), who committed to the Crimson last month. Travis will be coming to campus this weekend as well, with the explicit goal of convincing his fellow high school seniors to join him next year.

The only way Amaker and his staff will be able to achieve their dream of gaining Harvard men’s basketball a place on the national stage—not to mention its first Ivy title—is by drawing in higher level talent. The road to building “something special,” as Amaker is so fond of saying, could potentially have its foundation laid this weekend.