BREAKING: Man Found in Front of Church in Harvard Yard After Shooting Himself 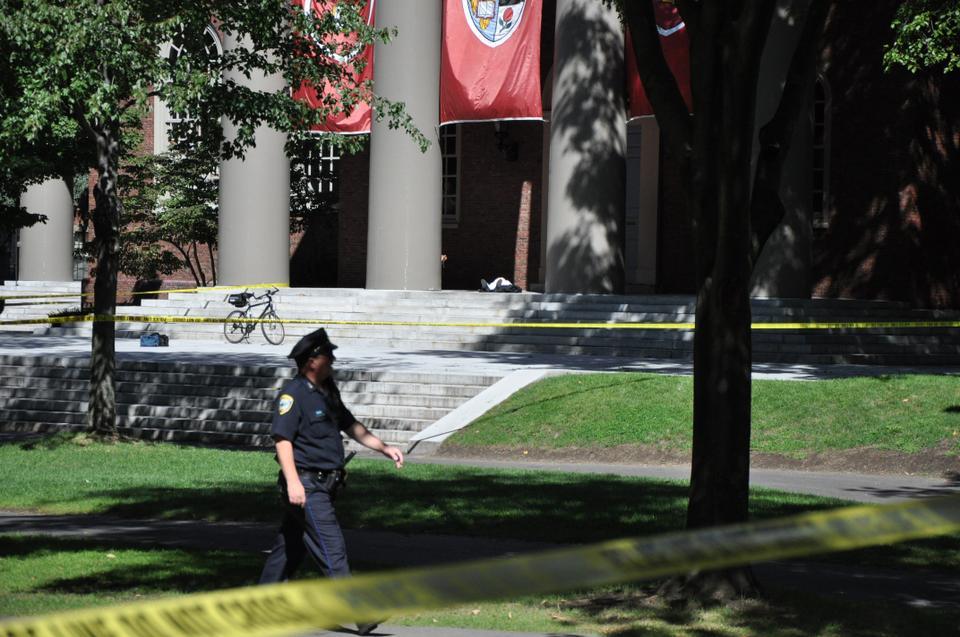 An unidentified man was found on the top step of Memorial Church in Tercentenary Theatre this morning after fatally shooting himself.

"A man suffered a self-inflicted gun shot wound in the Yard," a University spokesperson confirmed. "There is no ongoing threat to the campus."

Cambridge Fire and Rescue pronounced the individual deceased, according to a community advisory issued by the Harvard University Police Department. An individual with close knowledge of the incident said that it appeared that he is not affiliated with Harvard University.

"At this time, we believe this is an isolated incident and there is no continuing safety threat to the community," said HUPD spokesman Steven G. Catalano, who could not provide further details or comment at the time.

Middlesex District Attorney's office spokesperson Jessica Venezia Pastore said that the death "does not appear suspicious nor does it involve foul play." For that reason, she declined to comment on what type of gun was used, citing department policy not to release details on incidents that do not appear to involve criminal activity.

Local and state police and the Middlesex District Attorney’s office are helping HUPD investigate the incident, according to a statement from the Cambridge Police Department.

Katherine C. Mentzinger '14, a resident of Thayer Hall, said that she saw the body from her friend’s room in the dorm and heard one gunshot.

"From my friend’s window, I could see him in a pool of blood," she said.

Thayer resident Nathaniel J. Miller '14 said that people in his dorm were "shaken a little bit, but no one is too hysterical."

Mentzinger said she saw a tour group that had been in the area during the shooting taken aside to be questioned by police. Many of the individuals at the scene of the incident were crying, according to Mentzinger.

At least 10 officers were responding to the incident just after 11 a.m. on Saturday. An officer with the Cambridge Police Department said earlier this morning, at the scene of the incident, "There’s a body and he's been shot."

Officers marked off the scene of the shooting and the surrounding yard with yellow tape. Entrances to the yard were restricted, with gates on Quincy Street near Lamont Library and Loeb House closed, as well as all but one gate by the Science Center.

Most of the individuals who exited Memorial Church around 12:30 p.m. when Yom Kippur services ended were not aware that a shooting had taken place just a few feet outside of where they had been observing the holiday.

Attendees—many of whom found out about the news from inquiring reporters—said that they had not been informed of the shooting during the service. Though two police officers entered the church toward the beginning of services, there was no sense of alarm or panic, they said.

At that time, the man remained lying on his back on the steps of Memorial Church.

While police milled about the east side of the Yard, tours continued on the opposite side of University Hall where people blithely continued rubbing the foot of the John Harvard statue.

—Punit N. Shah contributed to the reporting of this story.