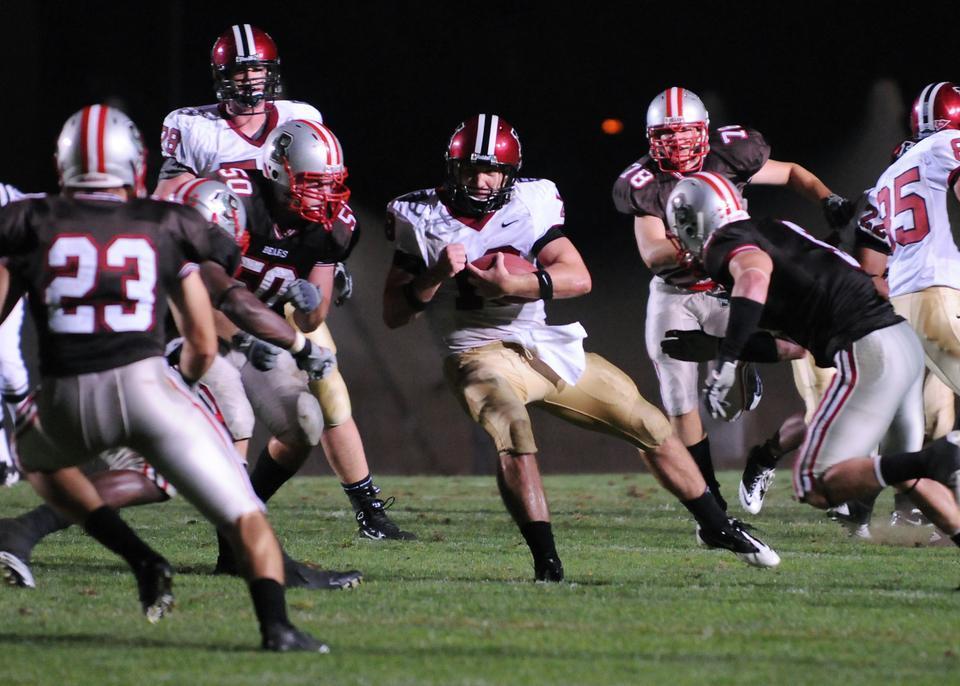 Senior Andrew Hatch had trouble jumpstarting both parts of the offense in Harvard's 29-14 loss to Brown.
By B. Marjorie Gullick, Crimson Staff Writer

PROVIDENCE, R.I.—In another showdown under the lights, that night-game magic was with Brown on Saturday as it spoiled the hopes of a perfect season for the Harvard football team, which suffered a resounding 29-14 defeat at the hands of the Bears (2-0, 1-0 Ivy). The Crimson (1-1, 0-1) was coming off of a dominant home opener in which it beat Holy Cross, 34-6, inspiring the expectation of an Ivy League championship.

Perhaps it was the overwhelming waves of nearly 18,000 excited Brown fans cheering beneath Brown Stadium’s temporary lights, the automatic foot of freshman kicker Alex Norocea, or the spot-on, aggressive Bears’ defense that made Harvard stumble. But whatever the cause, from the opening drive the Crimson just couldn’t find its rhythm.

It was a night of mistakes for Harvard, which fumbled the ball four times, threw two interceptions, and suffered penalty after penalty, keeping its defense on the field for nearly two-thirds of the game. Brown commanded play from the opening kickoff, putting itself on the board through a field goal by Norocea. The kick, which put the Bears ahead, 3-0, was the first of five successful field goal attempts by the freshman, who tied the school record for field goals in a single game.

“The offense put us in a good position,” the kicker said. “I just went out there and did my job and what I’m expected to do.”

Norocea missed only one attempt during the game on the final scoring opportunity for Brown, a 34-yard kick that went just wide.

The Bears never let up after their first score, widening the gap to 23-0 before the Crimson finally generated enough offense to earn a touchdown seconds before halftime.

The touchdown came off a 21-yard pass from senior quarterback Andrew Hatch—whose commanding offensive presence in the Holy Cross game was smothered by Brown’s stifling defense—to classmate Marco Iannuzzi. The touchdown series took only four plays and less than 30 seconds to complete, showing some of the flair Harvard had possessed against the Crusaders.

The opportunity came from one of the rare mistakes by Brown, which attempted to squib its kickoff to avoid Iannuzzi following one of its own touchdowns. The play went awry as the ball went off the foot of a Crimson up-man and was recovered at the Brown 45.

Immediately following halftime, Iannuzzi struck again, returning the Bears’ kickoff 95 yards for a touchdown that pulled the Crimson within nine. For a moment, it looked as though the one-sided match may turn into a game after all.

“I think we came together as a team on those two plays,” Iannuzzi said of his touchdowns. “A great team effort [on the first touchdown] and then another coming out of halftime. The team was perfect.”

Alas, the perfection lasted for only two short series, a total of 36 seconds, before Brown took over once again, this time never relenting its control over the game.

The Bears pulled down an interception from Hatch—his second on the night—just minutes after the touchdown.

“[Hatch] struggled, we struggled. It’s a team thing,” Crimson coach Tim Murphy said. “You can’t blame it all on the quarterback...we didn’t help him.”

The pick set up Norocea for his fourth field goal of the game, giving Brown a 26-14 lead.

Despite the interceptions, Harvard’s most disastrous play came with three minutes left in the third, when the snap for Crimson punter Jacob Dombrowski went over his head. The sophomore initially recovered the ball, only to fumble it after taking a hard hit from a Bears defender. Brown took control of the ball at Harvard’s 22, allowing for Norocea’s final field goal of the night.

The Harvard defense, anchored by captain Collin Zych, who led all defenders with 12 sacks, did what it could given the amount of time it spent on the field. But the Bears proved too effective at third-down conversions, successfully turning eight of 11 in the opening half alone.

“They did some things that they pretty much do each week, and they did it to us last year,” Brown coach Phil Estes said. “We just tried to take advantage and hope that they gave us the same coverage. We got it and made some plays.”

The Crimson was plagued by penalties, both on offense and defense, giving the Bears yardage while hindering its own.

Despite the loss, all hope is not gone for Harvard. Brown beat the Crimson in the 2008 conference opener, and Harvard was able to rally and share the Ivy League title.

Perhaps, like in that season, like in the game against Holy Cross, and like the Bears on Saturday night, Harvard can find its own measure of magic.