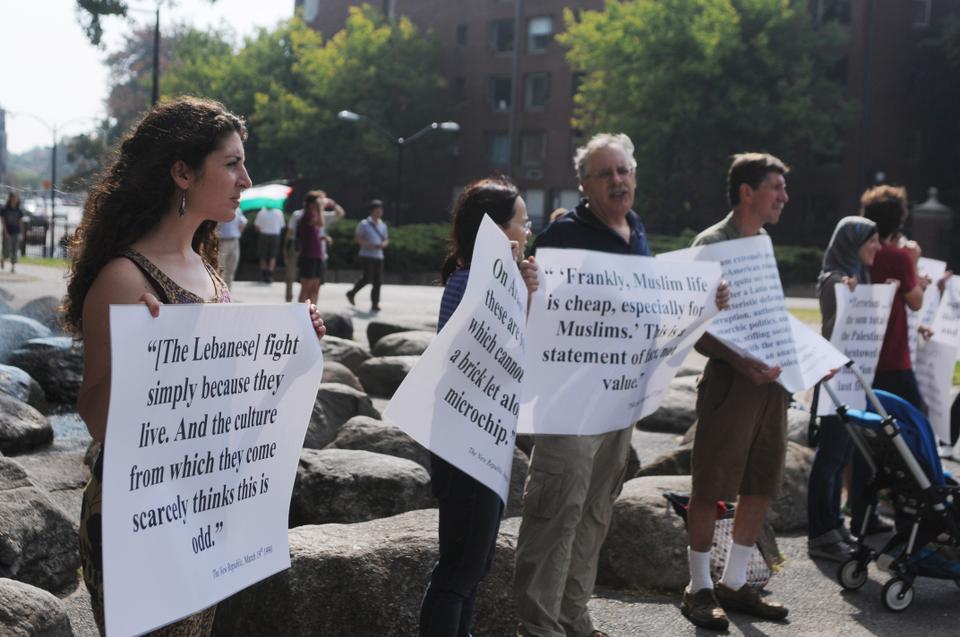 Students and affiliates of Harvard University hold signs with quotes by Martin Peretz in front of the Science Center on Saturday morning in protest against the Social Studies Committee’s decision to honor Peretz.
By Julia R Jeffries and Gautam S. Kumar, Crimson Staff Writers

As the Committee on Degrees in Social Studies celebrated its 50th anniversary, protestors gathered starting at 9:30 a.m. outside of the Science Center on Saturday, denouncing Harvard University for accepting a donation in the name of former Social Studies Head Tutor Martin “Marty” H. Peretz.

Renowned academics and alumni presented on the history and future of the program during the committee’s celebration, which was interrupted by protestors reacting against Peretz’s recent controversial comments.

Members of the Social Studies community pressed the committee during question and answer sessions to explain its decision to honor Peretz—who many said had a 30-year history of issuing hateful language towards blacks, Latinos, Arabs, and Muslims. And at a luncheon during which Peretz was recognized, nearly ten attendees walked out.

Robert P. Wolff ’54, who was principal speaker at the luncheon and the first head tutor of Social Studies, criticized the committee at the luncheon for not taking a harder stance against recognizing Peretz, to much audience applause.

Because Harvard is an “imperial power” in the higher education sphere, it tends to treat all money, regardless of source, as “without stench,” Wolff said at the luncheon.

“I had always hoped that Social Studies would hold itself to a higher standard...but, here, the money stinks.”

Wolff was referring to a research fund focused on sponsorship for undergraduate research on interracial and justice issues in honor of Peretz’s teaching contributions. The fund was paid for by his former students and began with $500,000 in donations, jumping to $650,000 just within the week before the anniversary celebration.

Recent official statements from both the University and the Social Studies committee announced that they would accept the fund. Though the committee decided to remove Peretz’s name from the celebration’s list of speakers, it still recognized him alongside past head tutors and directors of studies, as the position is now termed.

Throughout the past week, over 500 alumni, students, and staff organized to protest Peretz’s coming to Harvard and the University’s acceptance of the fund—a debate that has been extensively covered by national media.

things that he says...I find it incomprehensible,”  Wolff said in an interview with The Crimson. “What disturbed me was not simply that he said these things, but that Social Studies was going to honor him by establish a scholarship research fund in his name.”

Wolff continued to suggest that much of Peretz’s antagonistic views derive from his pro-Israeli stance—an issue that Wolff argued was largely ignored because “there are a lot of Jews here, and that’s not an issue that they’re ready to confront openly.”

Wolff also criticized the naming of the fund. “He didn’t even have the grace to say that he didn’t want the fund in his name,” Wolff said. “Next thing you know, he’s going to want his name on every single urinal and bench at Harvard.”

“I knew Marty Peretz 50 years ago, and he was an egregious little wannabe fifty years ago. And fifty years has not improved him one bit,” Wolff said.

Wolff signed the petition to bar Peretz from speaking. Many of the other signatories protested vocally outside the Science Center and Adams House, where the luncheon took place. The rallies drew police attention.

In his opening remarks, Chair of the Committee on Degrees in Social Studies Richard Tuck acknowledged the protestors, encouraging the exercise of free speech, but also asking them to recognize free speech of the celebration’s panel of speakers.

Protests—organized by Maryam M. Gharavi, a sixth year graduate student in the comparative literature department—consisted of protesters raising signs bearing some of Peretz’s controversial past quotes.Gharavi said that although she headed the protests, undergraduates played a huge role in their organization. She added that she was happy so many people, including Social Studies concentrators and alumni, came out to support the cause.

“Students continued to protest for almost six hours—Social Studies undergraduates were especially incensed,” Gharavi said. “People were horrified that a 25-year career in racism would be awarded in this day and age.”

Gharavi also said that she hoped the University would reconsider accepting the fund in Peretz’s name, as she argued that “hateful and bigoted statements should not be honored.”

“We absolutely encourage the administration and President Faust to reverse their decision,” Gharavi said.

Protestors tailed Peretz after a morning panel in the Science Center to greet him outside Adams House Dining Hall. The protestors were audible through the open windows, prompting dining hall workers to quickly shut the windows and close the curtains. Many members of the Social Studies community looked favorably on the protests.

“I’m happy to see the protest,” said History Department Chair James T. Kloppenberg, who serves as a member of the Social Studies Standing Committee. “Social studies is a lively and engaging community, so it’s good that the students are expressing themselves as they are.”

“But people interpreted his second apology differently—I took it as quite a powerful one,” Kloppenberg said. “I’ve been critical of his views on the Middle East for 30 years now, so nothing he says has surprised me or changed what I think of him.”

David A. Jost ’68, who registered to attend the Social Studies celebration well before the debate on the topic began, said “if in fact what [Peretz] said was accurately quoted, things that are so prejudicial to such a large group of citizens is truly reprehensible.”

“I haven’t read the blog,”  William A.M. Blumberg ’68 said, “but what’s been appearing in the national media is just blatant nonsense.”

Blumberg suggested that the committee still made the right decision to “pocket the money,” as the fund would promote values that are consistent with Social Studies.

Princeton professor Michael Walzer, a friend of Peretz, defended both his friend and the fund in an afternoon panel discussion, saying that if people would criticize Peretz’s comments, they should review all annotations and comments made in lecture by other Social Studies professors—to the hissing of audience members. Even as University of Pennsylvania President Amy Gutmann ’71 gave the evening keynote address rounding out the celebration, the controversy over the honoring of Peretz still dominated much of the Saturday celebration.

“Social Studies is not about Marty Peretz, but that’s what this whole celebration has been about,” Wolff said.

—Staff writer Julia R. Jeffries can be reached at juliajeffries@college.harvard.edu.