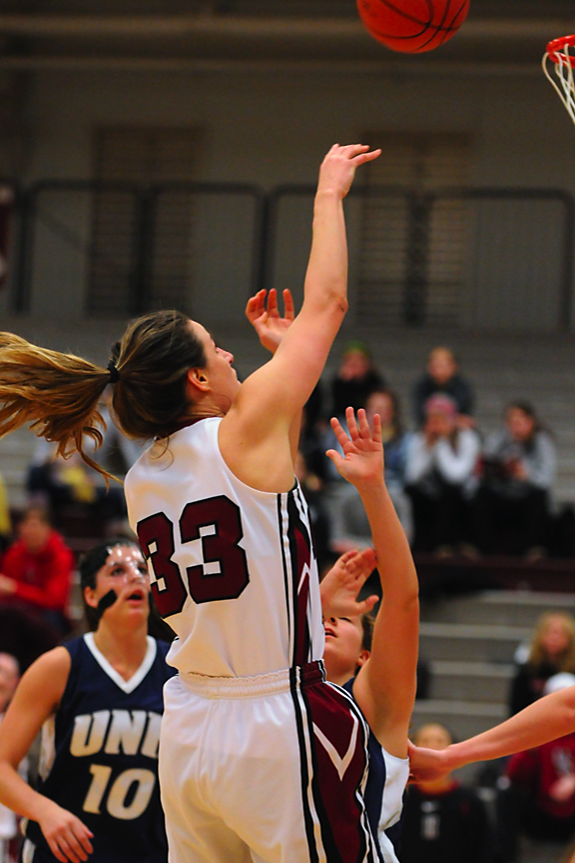 Senior Emma Markley, shown here in previous action, scored 16 points to go along with her four blocks and four steals. Her defense was the difference maker last night against Dartmouth, forcing turnovers and causing the Big Green to panic at times. The Crimson won by a large margin, 82-49.
By Brian A. Campos, Crimson Staff Writer

In the first Ivy League contest of the season last year, the Harvard women’s basketball team suffered a one-point upset at the hands of Dartmouth on the road.

This time around, at home, the Crimson exacted its revenge—and much more.

Harvard (8-6, 1-0 Ivy) thoroughly outclassed the Big Green (4-11, 0-1) at Lavietes Pavilion last night in a blowout win, 82-49. For the fourth straight game, junior point guard Brogan Berry led the way with 18 points, seven assists, and six rebounds. Rookie Christine Clark also had 18 points to accompany her 10 rebounds for the first double-double of her young career. The result was crucial for the Crimson, not only because it was the first Ivy win of the year but also due to the history between these two programs.

“Huge,” said Harvard coach Kathy Delaney-Smith of the win. “There’s no rivalry in the league like Harvard-Dartmouth. It doesn’t matter what their record is, and it doesn’t matter what our record is—it just matters that they have the same number of banners as we do. We’re always going to battle each other. I don’t think there’s been a blowout like this between the two teams in a long time.”

Dartmouth—which was competitive for only the first 15 minutes of the contest—seems to still be reeling from losing former Ivy League Player of the Year, senior forward Brittney Smith, to a season-ending injury in the team’s seventh game.

Both teams had a promising start, exchanging baskets and playing tenacious defense. Dartmouth opened the scoring after sophomore forward Miriam Rutzen fouled Cassie Cooper, who made both of her free throws. That would prove to be the Big Green’s largest lead of the game, with 19:35 left in the first period.

Berry found co-captain Christine Matera for the corner trey, which she hit with a hand in her face. Dartmouth forward Janelle Ross, who finished the game with a team-high 15 points, answered on the other end with a shot in the post. But, on the following possession, senior forward Emma Markley mimicked Ross and scored from close range, setting the score at 5-4. Markley was second on the team with 16 points and recorded four blocks and four steals.

There were five lead changes until the Crimson took over the contest. Clark, running along the baseline, found Berry, who sank the trey from the right corner to give Harvard a three-point lead with 13:53 remaining in the half.

Dartmouth’s ensuing possession was cut short by Markley’s block on Ross, and Berry dished the ball out to sophomore guard Jasmine Evans for the long jumper to increase the lead, 17-12.

A series of mistakes by the Big Green and Markley’s emphatic blocks kept Dartmouth from scoring for nearly 10 minutes. With nine minutes left in the half, Berry delivered the ball perfectly to Rutzen, who was moving towards the basket. Rutzen was able to maintain control of her body long enough to make the shot and sustain the foul. Her free throw completed a three-point play and made the score 20-12.

Berry completed a 10-0 run after reading a pass, stealing the ball, and finishing on the other end with a simple layup to set the score at 22-12 with 7:37 left to play in the period.

Sasha Dosenko ended the scoring drought for the Big Green with a lefty hook shot, and Cooper also scored on the ensuing Dartmouth possession. Cooper finished the game with a double-double, scoring 15 points and grabbing 10 boards.

With four minutes left, the visiting team cut the deficit to five, but it only took two minutes for the Crimson to bump the lead back to nine.

Ross, on a fast break, caught a fumbling ball and converted the basket to keep it close, but a series of passes between Berry, Clark, and Evans on another fast break led to a layup with 50 seconds left.

“I just love the balanced scoring,” Delaney-Smith said. “We’re trying to be unselfish.”

Harvard followed up by forcing a jumpball, and with the final possession of the first half the Crimson milked the clock down to the final second. Lippert, seeing that time was running out, threw a three-pointer off the backboard to give Harvard its biggest lead of the half, 34-22.

The deficit only got bigger for Dartmouth, who trailed the Crimson, 48-24, with 15:49 remaining in the second period. It was clear that Harvard would run away with this one, but unlike the game against NJIT, Delaney-Smith did not feature most of her roster. With her starters in the game for the majority of the second period, the Crimson was able to extend the lead to 35 after Rutzen made a shot on a fast break with 8:29 on the clock.

“We never really expected to win by this big,” Berry said. “We just come into every game trying to execute little things, like defense, rebounding, and our plays. We go out there, try to play as hard as we can, and if we win by 30, we win by 30.”

Harvard shot 49.2 percent from the field and 8-of-19 from beyond the arc. Dartmouth had no chance of keeping up with the hot-scoring Crimson, shooting 6.7 percent from downtown and 31.3 percent overall.