No. 16 BU Pummels Harvard on the Ice 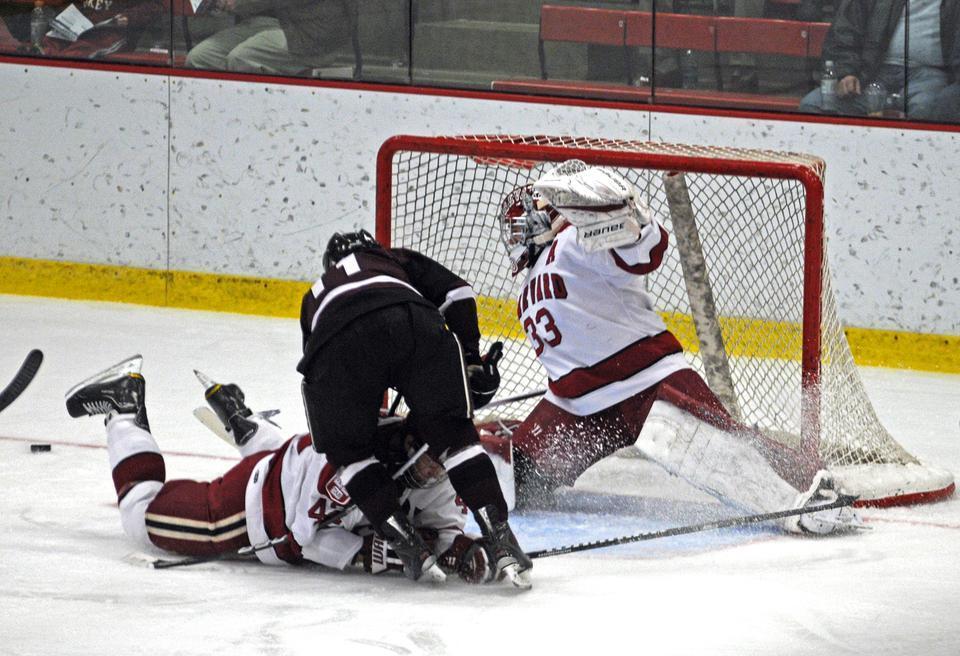 Assistant captain and goaltender Kyle Richter, shows here in previous action, recorded 32 saves but let in five goals during the Crimson's contest with No. 16 BU. It's the third straight time Harvard has lost to its cross-town rival.
By Scott A. Sherman, Crimson Staff Writer

As snow laid on the ground on a chilly Saturday night in Boston, the Harvard men’s hockey team stayed even colder, dropping a 5-2 contest to its local rival, No. 16 Boston University, at Agganis Arena.

“It was a close game until a certain point, when they got a few goals in a row,” senior defenseman Chris Huxley said. “It was kind of a buzz-kill; we didn’t really play our best.”

Both teams had good chances to score early in the first period but were unable to convert.

Sophomore forward Luke Greiner had an opportunity for Harvard when he redirected classmate Danny Biega’s point shot past BU goalie Kieran Millan, but the puck deflected off the right post.

Soon after, the Terriers’ Alex Chiasson had a good look from the slot, but the forward was denied by Crimson assistant captain goaltender Kyle Richter, who made a save with his left arm.

BU got on the board 11:41 into the opening frame after Harvard freshman defenseman Danny Fick was called for holding, giving the Terriers their first power play of the game. Connolly put the man-advantage to good use, taking a pass from teammate Adam Clendening and sending a one-timer past Richter from the right circle to put his team up, 1-0.

“We can’t control [penalties] completely,” Huxley said. “We just have to try to be careful and be more disciplined.”

The Terriers scored again just under two minutes into the second, when—after consecutive saves from Richter—BU’s Wade Megan put his third attempt over the goalie’s left shoulder to double the Terrier lead.

But just over two minutes later, Harvard sophomore Marshall Everson cut the advantage in half. Senior Michael Biega picked up a rebound of a Fick shot and sent a cross-ice pass to Everson, who hit the post with his first attempt before putting in his own rebound.

“Mike Biega picked it up in the slot, he made an unreal pass, and I was wide-open on the back side,” Everson said. “He saw me between three or four guys—I don’t know how he did it. I just hit the pipe, and then I was able to get an empty net.”

Thirteen-and-a-half minutes into the frame, the Crimson got a chance on a power play after Megan was called for hooking. But Connolly was able to intercept a Harvard pass at center ice and beat Richter on a breakaway with a high wrister to extend the Terrier lead to 3-1. It was the first shorthanded goal Harvard has allowed this season.

“[Turnovers are] something we’ve stressed all year,” Everson said. “They definitely hurt us Saturday night. From now on, we’ve just got to make our guys more wary of certain passes...you have to make the safe play sometimes over the risky one; otherwise it will lead to goals like that.”

Connolly, who has eight goals on the season, continued to challenge Richter as the period wore down, but the senior goaltender made two saves on the forward at the end of the frame to keep the Crimson within striking distance.

But just 23 seconds in the third period, Richter was scored on again, this time by BU forward Joe Pereira. The senior stole the puck from a Crimson defender in the Harvard zone and beat Richter from right outside the crease—while flying into the goaltender—to make the score 4-1.

“Early in the third we didn’t get the breaks we needed to start a comeback, and things just kind of snowballed for the rest of that period,” Everson said.

Harvard then squandered an offensive opportunity of its own. Terrier freshman Garrett Noonan was called for an extended penalty for game misconduct after elbowing a Harvard player in the head, but the Crimson was called for a too-many-men-on-the-ice infraction three minutes into the ensuing power play, causing it to lose its advantage.

BU extended its lead to 5-1 8:04 into the period, when Terrier sophomore Justin Courtnall initiated a give-and-go with teammate Patrick MacGregor and snuck the puck past Richter on a wraparound from the left side.

“I think there were more breakdowns than usual defensively,” Huxley said. “Usually we do a pretty solid job back there, but I felt like we made more mistakes than we usually do.”

Two minutes later, Harvard defenseman Ryan Grimshaw cut the lead to 5-2 when he took successive passes from Michael Biega and sophomore Alex Killorn and backhanded the puck past Millan.

But that would be the closest the Crimson would get. Richter finished with 32 saves in the losing effort, while Millan had 31 saves for BU. Junior Rence Coassin and Michael Biega led Harvard with five shots apiece, while Connolly finished with a team-leading eight for the Terriers.

“I didn’t feel like we played our best game,” Everson said. “To play a team of that caliber and go down 2-0 in the first, it’s tough to make a comeback.”