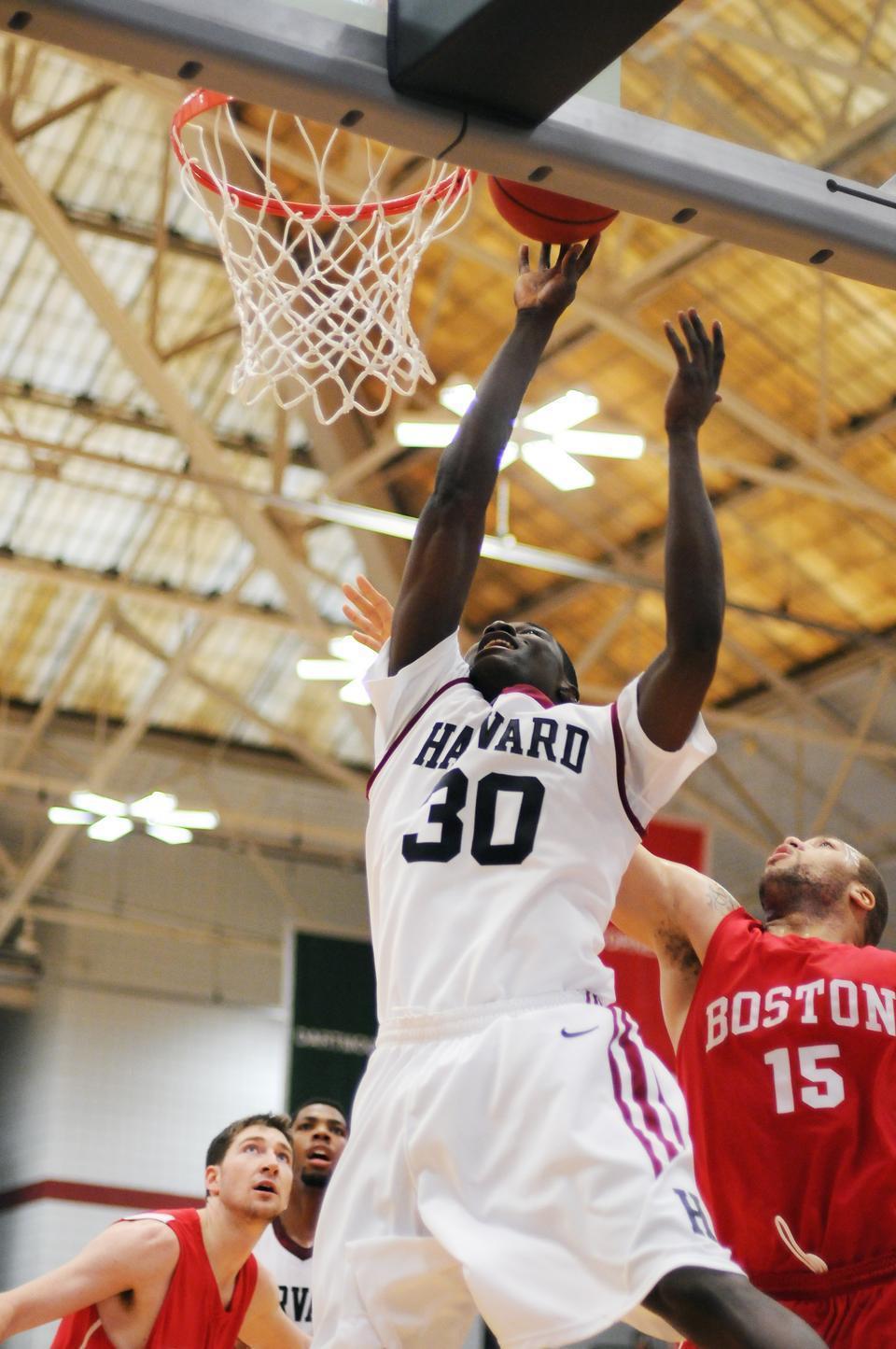 Sophomore forward Kyle Casey, shown here in previous action, grabbed a career-high 15 boards to go along with his 10 points to record a double-double against George Washington. The Crimson emerged victorious in the close contest, 67-62.
By Scott A. Sherman, Crimson Staff Writer

George Washington was known for his military prowess. It was fitting, then, that the Harvard men’s basketball team’s contest with the school named after the first president would turn into quite the war.

In the end, the Crimson (12-3, 1-0 Ivy) emerged victorious against George Washington (10-7), 67-62, but—like Washington’s battles—victory did not come without loss. The Crimson’s two top scorers, junior co-captain Keith Wright and sophomore Christian Webster, succumbed to injury in the process.

“I thought it was a really tough effort by our team because we lost two of our best players for essentially the entire second half,” junior co-captain Oliver McNally said. “We knew we needed a lot of people to step in…and for people to step up and do a little more than they were used to.”

McNally and freshman Laurent Rivard picked up the scoring slack with 16 points each, while sophomore Kyle Casey chipped in 10 points and a career-high 15 rebounds.

“It was definitely a tough game, a physical game,” sophomore guard Brandyn Curry said. “They like to press, keep the tempo up. We like to play with a fast tempo too, so going in I knew it was going to be a fast game with a lot of intensity.”

The Colonials raced out to an 8-2 lead after a string of Harvard turnovers, capped by a layup by GW sophomore Bryan Byrnes. But Byrnes turned the ball over the next time down, and Wright finished with a dunk at the other end to halt the Colonial momentum. A Webster three from the corner on Harvard’s next possession brought the Crimson within one five minutes into the opening half.

The teams went back and forth for ten minutes, until GW began to pull away. With the game tied at 18, the Colonials went on a 10-2 run highlighted by back-to-back three pointers by freshman Nemanja Mikic.

The lead held for the final three minutes of the period, and a Wright free throw with one second remaining made the score 33-26 in GW's favor heading into halftime.

But the Crimson would go on to dominate the second half, shooting 52.4 percent from the field and outscoring the Colonials, 41-29.

A Byrnes jumper to open the period stretched the GW lead to nine, but Rivard responded with a three on the other end to cut the lead to six. He would do the same thing a few minutes later, when—after a Dwayne Smith layup pushed the GW lead to eight at 39-31—the sharpshooter drilled another longball to quell the Colonial momentum.

“We never really got ahead of ourselves and tried to do too much,” McNally said. “We just tried to chip at [the lead].”

GW held a small advantage for the next five minutes, with Harvard unable to pull closer than four. With 11:40 remaining, Casey grabbed an offensive rebound off a missed three pointer by junior Andrew Van Nest and kicked it out to McNally, who buried a trey to cut the Colonial lead to three.

“I knew I needed to do a little bit more than I’m used to doing [after the injuries to Webster and Wright],” McNally said.

Byrnes responded with a three of his own to push the lead back to 48-42 with ten minutes left, but the Crimson would not go away. Rivard knocked down a jumper and Casey hit an and-one layup on Harvard’s next two possessions to cut the margin down to one. After a basket by GW’s Daymon Warren, a Rivard trey tied the game at 50 with 8:41 remaining.

Casey then gave Harvard its first lead since 7:26 of the first half with a layup after a Taylor turnover, and a McNally three a minute later would put Harvard up, 55-51.

The Crimson wouldn’t relinquish its lead for the rest of the game, with GW never pulling within less than two. Up 62-60 with a minute to go, Casey hit a layup and McNally came up with a big steal off of Taylor. The co-captain dished the ball out to Curry, who was fouled and hit one free throw to give Harvard a five-point lead.

“Taylor was a really tough driver,” McNally said. “He was a pretty tough guy to guard. [But] he let down for that one play, and Brandyn did a good job making free throws down the stretch.”

Two free throws by Byrnes with 17 seconds remaining pulled the Colonials within three, but McNally—second in the nation in free-throw percentage at 94.3 percent—iced the game with two free throws of his own to give Harvard the 67-62 win.

It was the fifth straight win for the Crimson, who finished its nonconference schedule with momentum heading into Ivy play. But the victory was not without loss, as Webster—who is from the DC area and whose father played at GW—and Wright left with injury.

Curry said he thought both were day-to-day. Though the injuries were a setback to the game plan, Curry and McNally were both proud of their teammates’ ability to step up to the challenge.

“It was a really good win for us,” McNally said. “Especially on the road against a good team.”

“I think it shows how deep our team can be,” Curry added. “We got big minutes from Ugo [Okam], [Andrew Van] Nest, and Matt Brown. Those guys came in and gave us great minutes all around. It was really a team victory.”