Down 12 to Dartmouth, men’s basketball comes back to secure its second Ivy win 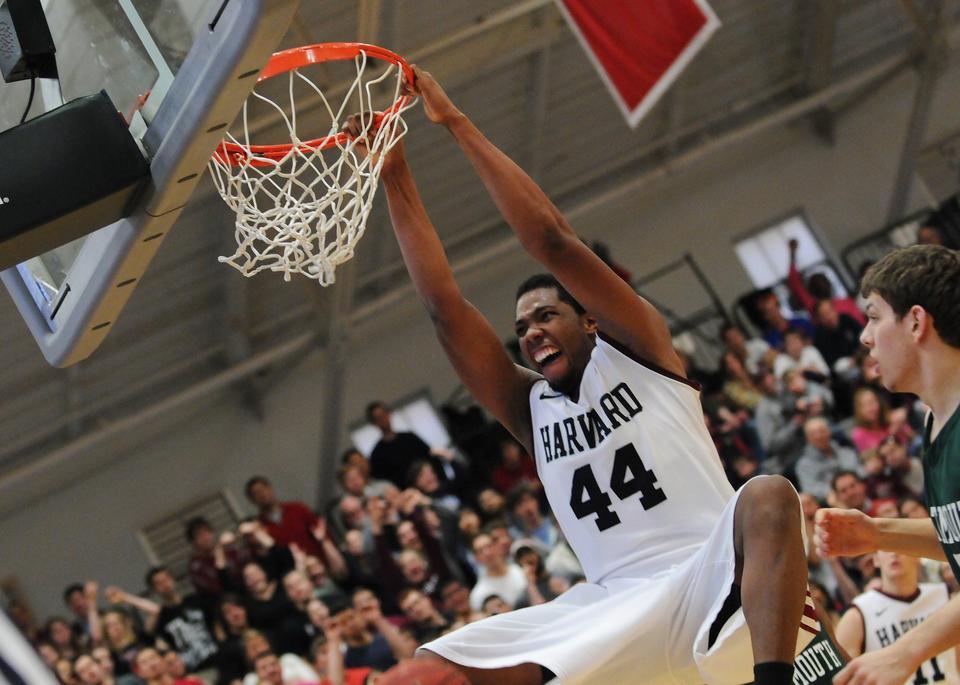 It certainly was not the Harvard men’s basketball team’s strongest performance of the year, but it was enough to earn the victory.

Harvard, which trailed 40-28 with 15:36 remaining in the game, went on a 23-2 run over the next 12:38 of play to take a nine-point lead. The Crimson’s lead never dipped below five for the remainder of the contest, and Harvard finished with a nine-point victory against a Big Green squad picked to finish at the bottom of the Ivy League.

The win marks the Crimson’s sixth straight victory and its 11th straight at Lavietes Pavilion—tying a program record.

“I thought that we showed a great deal of toughness and grit to be able to dig one out when it wasn’t necessarily going our way,” Harvard coach Tommy Amaker said. “Things weren’t as easily flowing for us as they had been.”

After jumping out to a 15-8 lead to open the contest, the Crimson fell cold on offense and started to surrender open looks to Dartmouth on defense.

The Big Green, which entered the contest shooting a conference-worst 38 percent from the field, capitalized on its early opportunities, knocking down three straight treys to take a 17-15 advantage 10 minutes in.

“Dartmouth came out confident and hit a lot of shots,” McNally said. “You have to give credit to them, but we weren’t playing good defense.”

After freshman Laurent Rivard pulled the hosts within four thanks to a pair of free throws with six minutes to play in the first half, the Crimson switched to a matchup zone for the first time on the afternoon.

The zone proved effective, as Harvard came up with stops on Dartmouth’s next five possessions and pulled within one, 25-24.

“That was a big thing for us to be able to change the rhythm,” Amaker said of the switch to zone. “I thought we did a better job of communicating and getting matched. We don’t use it a lot, but we practice it in case we need it, and certainly we thought we needed it this afternoon.”

But the Crimson was unable to even the score, as the Big Green closed out the half on a 7-2 run to take a six-point lead into the break.

Dartmouth picked up from where it left off to start the second frame, opening with an 8-2 run capped by a corner three from R.J. Griffin.

Griffin’s three, which came with 15:36 left on the clock, marked the Big Green’s 40th point of the contest. Dartmouth scored just two points over the next 13:02 and 10 points throughout the remainder of the contest.

Crucial to Harvard’s defensive success was the switch back to the matchup zone and the play of Brown, a 6’3” point guard.

After seeing limited action in the Crimson’s first 14 contests, the rookie played significant minutes Saturday afternoon filling in for the injured Christian Webster—who missed Saturday’s matchup with a hip injury.

Brown was a key factor in 15 minutes of play, particularly on the defensive end, where he picked up a team-high three steals.

“I thought Matt Brown came in and gave us a great shot in the arm defensively,” Amaker said. “It was nice to see him step forward with a few shots, but his presence, his defense, and his toughness out there were a big key for us.”

“I think Matt Brown came off the bench and really had a sense of urgency in the way he played,” McNally echoed. “He gave a spark that nobody else was giving. I honestly believe without him, we would have lost.”

Rivard got a tough layup to fall, and then, following two free throws from McNally, sank a three from the right corner.

Two possessions later, Brown pulled the home team within two, drilling a trey off an extra pass from Rivard.

David Rufful put his team back up by four with a midrange jumper, but Harvard used the charity stripe to continue its assault on Dartmouth’s lead.

Four straight free throws from sophomore Brandyn Curry evened the score with 7:22 to play. The Crimson took the lead moments later, when Curry cut to the lane and dumped off a pass to junior co-captain Keith Wright, who finished with a two-handed slam.

Two free throws and a deep ball from McNally and a layup from Curry over the next three minutes of play made it 51-42 Harvard with 2:58 to play, and Harvard cruised to the victory.

“I was pretty disappointed with the way we came out, and that falls on Keith and my shoulders,” McNally said. “With that said, it showed a lot that we were able to turn it loose at the end. That was pretty impressive, but that’s got to be a forty-minute thing. You can’t play 10 minutes of good basketball.”