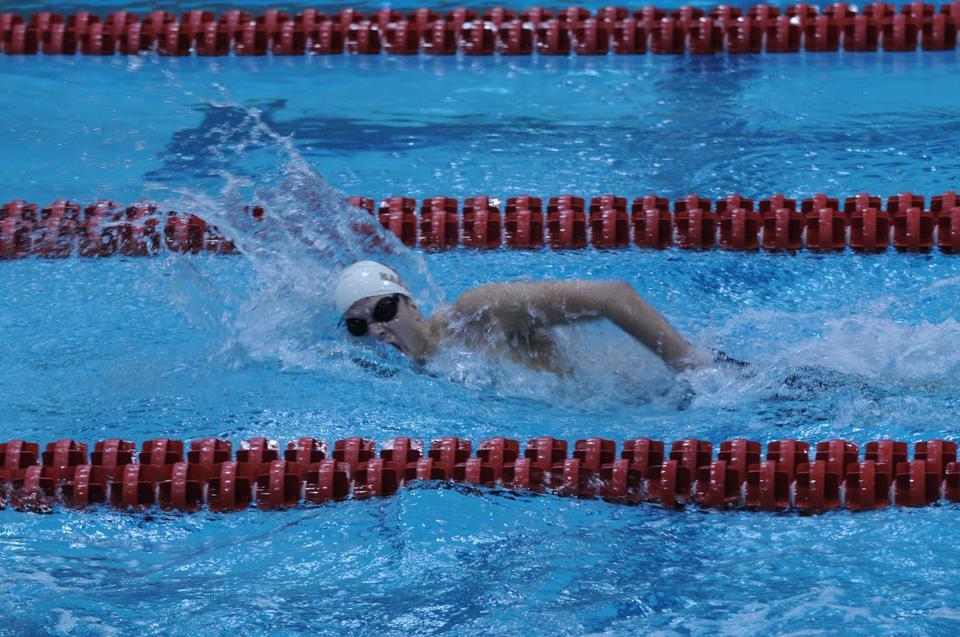 After spending a week in Puerto Rico, followed by a week in the blizzards of Boston, the men’s swimming and diving team was poised to get back into the racing season—and it showed. Heading into the weekend with a 3-0 record in the Ivy League, Harvard first faced Brown University on Friday, defeating the Bears 190—104. Two days later, the squad took on the University of Pennsylvania, winning 197-103. Its perfect record intact, the Crimson (7-0, 5-0 Ivy) sits at the top of the league standings going into the historic Harvard-Yale-Princeton meet next weekend.

“I think that this season we’ve just been able to improve over and over from one meet to the next,” senior Jamie Mannion said. “I think it’s going to be a great meet next weekend. We’re going to do what we need to and swim smart.”

Yesterday, Mannion and the seven other seniors of the squad celebrated their last dual meet at Blodgett Pool with the accompaniment of friends, family, and the Quakers. Beginning with the 200-yard medley relay, both squads started out strong as the first-place finisher from Penn edged out Crimson junior Rob Newell by 0.7 seconds. But Harvard jumped out in the second event, grabbing the top-three positions in the 1000-yard freestyle. Freshman Wes Stearns took the lead from the start, followed by senior Blake Lewkowitz, and freshman Chris Satterthwaite.

“I’d say our freshman class has really stepped up a lot, especially Satterthwaite, Danny Crigler, and Stearns. They’re all coming on really strong at the end and really bringing the team together,” Lewkowitz said. “It’s really inspiring for me to watch as a senior, remembering what I was like freshman year. It’s fun to know that the legacy will continue after the seniors are gone.”

The Crimson finished one-two-three again in the 100-yard freestyle event with Sattherwaite taking the top spot in 45.48, followed by senior Will Heyburn and junior Niall Janney. Not to be outdone, junior Rob Newell, seniors Douwe Yntema and Michael Dunn, and sophomore Brendan McIntee finished ahead of their Quaker competition in the 200-yard backstroke, giving the Crimson 18 points in that race alone.

Harvard had a chance to grab another top-three finish in the 200-yard individual medley, but Penn’s Brendan McHugh came from behind to edge out sophomore Owen Wurzbacher in a neck-and-neck race for the top spot with a time of 1:53.14.

“Penn was a great meet since it was home, and we had all of our parents here, and it was our senior meet,” Mannion said. “Just the energy in the place here was really good today.”

Ranta didn’t just dive against Penn, though. In the final event of the day, the 200-yard freestyle relay, Ranta joined seniors Will Heyburn, Jamie Mannion, and Douwe Yntema in one of the two senior relays that placed third and sixth.

“Zac, he’s a good swimmer—we’ve always said it,” Lewkowitz said. “He split at 23.5, which for a swimmer is fine, so it’s fun to have him and incorporate him as much as we can, because he’s a great leader on the team and a real great friend.”

Two days prior, the men’s swimming team saw similar success with four one-two-three results. But for the Crimson, the 12 first place finishes weren’t nearly as exciting as the electrical problems at the Seekonk High School pool.

“The Brown meet was a lot of fun, actually, because in the mile race the lights went out halfway through, so we swam the rest of the race in the dark,” Lewkowitz said. “It was strange. I mean, you couldn’t really see anything, but the officials had lanterns to walk up and down the pool. I’m at least happy to have Blodgett, where that stuff doesn’t happen.”

“It was awesome,” said Mannion who also swam in the event. “I stopped and I had to fix my goggles because I couldn’t see anything in the darkness, but everyone kept yelling to go, so I decided to finish the race in the dark, which was fun and something I’m always going to remember.”

Lewkowitz finished second in the event behind freshman Satterthwaite while Mannion finished fourth. In the 200-yard relay race before, all three Harvard teams finished ahead of their Brown counterparts, while later in the 100-yard butterfly junior Rob Newell finished ahead of freshman Jack Pretto and sophomore Ryan Cutter for another three-peat.

“It was a good weekend for the team, two big wins—convincing wins—getting ready for HYP next weekend,” Lewkowitz said. “We have a lot of ground to cover until Ivies. We’re definitely the underdogs right now, but the way we’ve been training, the way we’ve been swimming, I’m expecting some good things to happen.”