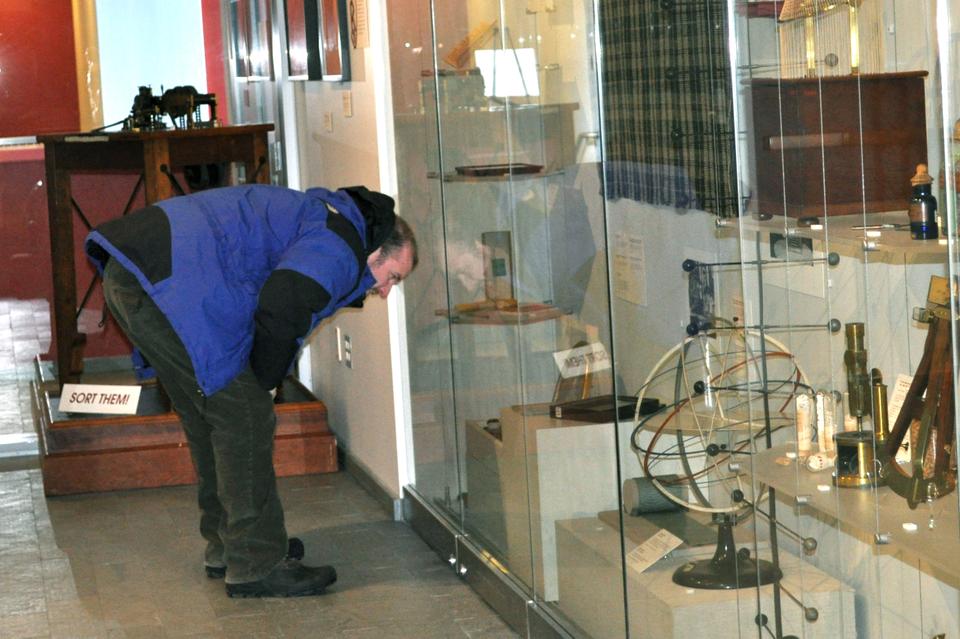 Philip C. Mead, a history graduate student, examines a belt worn by officers in the Harvard Washington Corps at the new Tangible Things exhibition at the Science Center. The exhibition, open from 11 a.m. to 4 p.m. Monday through Friday, features roughly 200 objects from Harvard’s massive collections, such as a beetle necklace, parasitic tapeworm, and tortilla from 1897.
By Michelle M. Hu, Crimson Staff Writer

A turtle caught by Henry David Thoreau, a 114-year-old tortilla about the size of a cookie, and the crusty, dry palette of painter John Singer Sargent will go on display this week as artifacts in “Tangible Things,” a new, multidisciplinary exhibit in the Science Center.

The three-floor showcase, which explores objects that have historical value but are not easily classified according to scholarly conventions, will remain on display for the next six months.

The exhibit will figure prominently in the coursework of two classes over the coming semester.

The artifacts on display were compiled over eight years of research by students History 84c: “Confronting Cultures/Interpreting Objects” taught by University Professor Laurel T. Ulrich and Senior Lecturer Ivan Gaskell. This semester, the students in the class U.S. in the World 30: “Tangible Things: Harvard Collections in World History,” also taught by Ulrich and Gaskell, will continue to collect objects around Harvard.

Gaskell noted that in collecting further items, students will have an opportunity to be creative.

“It’s like an invitation to go explore Harvard’s collection,” Gaskell said. “As long as you can get your hands on it, we’ll consider it,” he said.

Gaskell added that students in the past have been the first to investigate the historical value of objects in Harvard’s collections, some of which were sitting in storage.

He noted that some students have recorded audio files about their objects, which visitors can listen to by dialing a number on their cell phones while in the exhibit.

“I wonder if it’s the only class that encourages you to bring your cell phone,” said John P. Dixon, a teaching fellow for the class.

According to instructor Jeffrey Schnapp, a visiting Stanford University professor, the course examines “how we get different kinds of media to intersect with objects.”

Students in the History of Science class will study recent writings on collecting and curating objects, with the exhibition serving as a focal point.

Beyond the presentation in the Science Center, “Tangible Things” also features 16 “guest objects” in six other locations on campus. Among them is the Harvard University President’s chair from 1725, which is currently on display in the formerly all-female Radcliffe Yard as a statement of how far the male-dominated academic scene at Harvard has progressed, according to Gaskell.