The Moore You Get, the More You Want 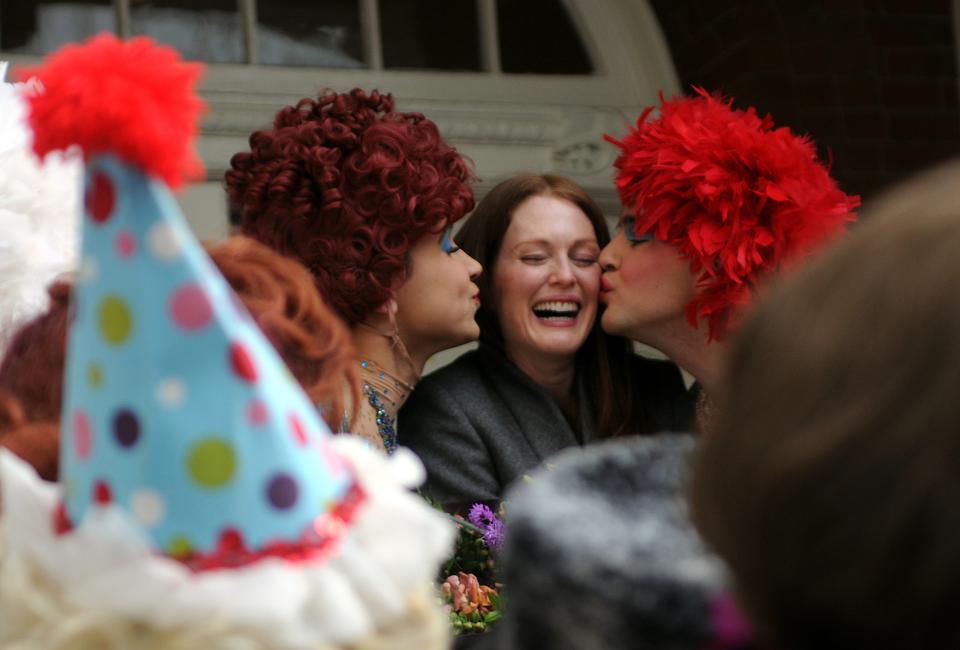 Julianne Moore received the Pudding Pot yesterday, but only after successfully cheering up Virginia Woolf, seducing Mark Zuckerberg, and “silencing” a lamb.

Moore accepted the Hasty Pudding Theatricals’ Woman of the Year Award in front of a packed audience at New College Theatre after the annual parade along Mass. Ave was canceled due to snow.

At a press conference following the ceremony, Moore discussed her perception of Harvard kids when she was an undergraduate at Boston University and her disappointment about not being nominated for an Academy Award for her role in last year’s “The Kids Are All Right.”

After being asked if she got snubbed, Moore responded, “Honestly, yes. I’m so happy for everybody...I just feel bad for myself. I’m not over it yet, but I will be.”

After entering the theater and sitting in the center seat of the fifth row, Moore endured a five-minute roast presented by HPT Cast President Michael A. Barron ’11 and Vice President Kyle J. Dancewicz ’11.

Barron and Dancewicz began with a crack about Moore’s undergraduate education at BU, during which she worked full time at a local bar.

“In fact, she is one of the few people who can say they worked hard while attending BU,” Dancewicz quipped.

Continuing the roast, the Hasty Pudding members mocked the “fantasies” Moore has explored in her films, including the “fantasy of lesbians raising a proud and happy family” in “The Kids Are All Right.”

Finally, after mentioning her failure to win an Academy Award, they welcomed Moore to the stage, making fun of the fake Dorchester accent she used during a guest appearance on the show “30 Rock.”

“It’s a privilege to talk like you constantly have a sock in your mouth,” joked Mark Wahlberg, played by Benjamin K. Moss ’13.

Barron and Dancewicz then explained that in order to receive the Pudding Pot, Moore had to complete “three secret, delicious tasks.”

The first was to seduce Zuckerberg, played by Ryan P. Halprin ’12, who said he was having lady troubles and only liked girls from BU.

After successfully making out with Halprin, he told her, “You’re not a bad actress. You’re just trying to be one.”

For her second task, Moore had to cheer up Virginia Woolf, played by Brandon J. Ortiz ’12, by chasing her around the stage and tickling her in a tickle fight.

To finally receive her Pudding Pot, Moore had to silence a lamb, played by Anthony T. Oblen ’14, by reading from her children’s book, “Freckleface Strawberry.” Once the lamb had been calmed, Barron and Dancewicz presented Moore with her award.

The audience was then able to see a preview of HPT’s new show, “Kashmir If You Can.”

At the press conference, Moore said that, as a student, “it was hard to determine what people’s identities were vis-a-vis their school.” The problem with Harvard students, she said, was that “they didn’t party.”

Jay Leno will receive the Man of the Year award Feb. 4 before the opening night of “Kashmir If You Can” at the New College Theatre.