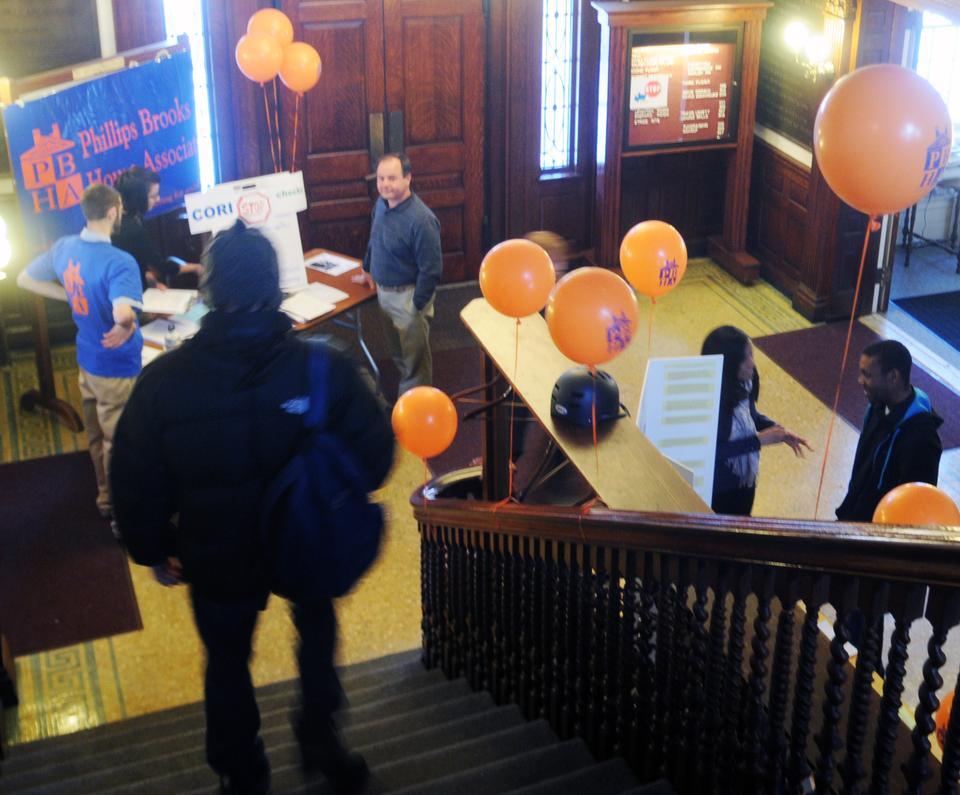 The Phillips Brooks House Association invites in Harvard students Thursday afternoon for an Open House. Students interested in social justice are able to sign up for one of their many programs.
By Monica M. Dodge, Crimson Staff Writer

Students navigated a sea of blue and orange t-shirts, flyers, and piles of candy as they tried to decide what programs to get involved in at the Phillips Brooks House Association’s Spring Open House yesterday afternoon. Of the 86 programs run year-round by PBHA, about half set up booths and were looking to recruit new members.

Although many organizations on campus do not encourage students to join halfway through the year, several PBHA volunteers said they thought the open house was a great way to draw in those who are looking to change their extracurricular activities or are hoping to take on more than they had originally anticipated.

“People may know they want to volunteer, but they don’t know what’s out there, so [the open house] is a great way for people to see their options on campus,” said Emelyn A. Rude ’12, a PBHA volunteer.

While the open house welcomed participants from all classes, PBHA volunteers said that the event typically attracts a large number of freshmen who did not have the chance or the desire to get involved at the beginning of the year.

“It can be intimidating to get involved in your first semester freshman year,” said Kristiana C. Laugen ’13, PBHA’s public relations officer. “People can get overwhelmed by all the activities or might not have heard of all of our programs.”

Several freshmen attending the event said they felt more comfortable getting involved after a semester on campus than they had at the beginning of the year.

“[Joining now] is good because now you’ve got yourself situated and you can figure out what you want to get involved in,” said James M. Acer ’14.

Although the number of students at the spring event tends to be lower than the number in the fall, yesterday’s turnout was at least as high and perhaps higher than in past springs, according to Laugen and other PBHA program directors.

PBHA volunteer Leah R. Kaplow ’12 said that, despite the smaller crowd than in the fall, she was pleased by the number of sign-ups that her program had received.