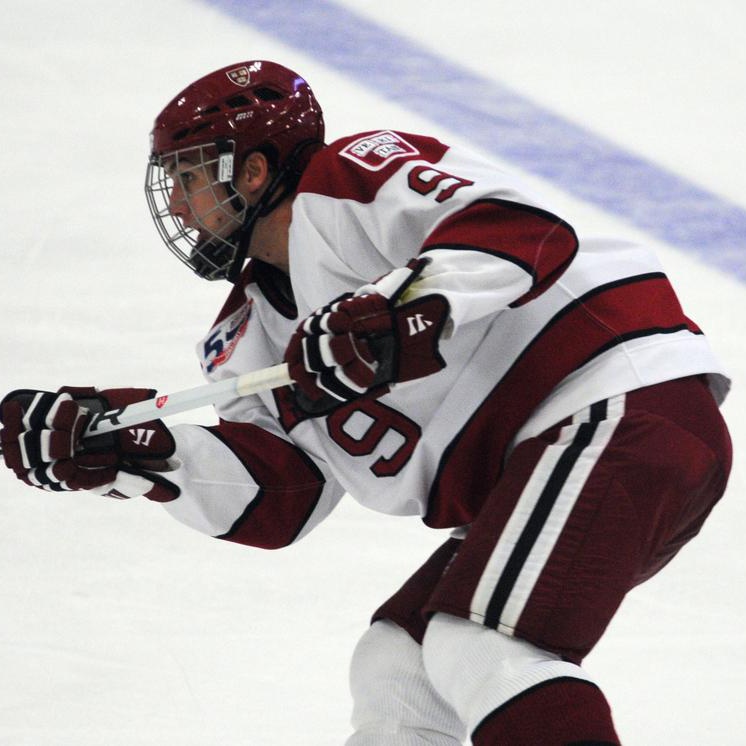 Shown here in earlier action, Danny Biega, a sophomore defenseman, scored three of Harvard’s six goals in a thorough thrashing of Colgate Friday evening. The hat trick was the second of the year by a member of the Crimson; Michael Biega—Danny’s older brother—also had a three-goal performance against Brown Jan. 7. The elder Biega added two assists against the Raiders. By Robert L. Ruffins
By Madeleine Smith, Crimson Staff Writer

After falling on the wrong side of several close decisions over the past two months, the Harvard men’s hockey team left little doubt as to who had played the better game on Friday night at Bright Hockey Center.

“I think we’ve worked awfully hard over the past few games and haven’t really been rewarded,” said Harvard coach Ted Donato ‘91. “So it’s nice to see the puck go in the net...we’re happy to get the win.”

Both teams went into Friday’s matchup coming off of long winless streaks, and each was looking for something to fall in their favor.

“The energy was good, both teams played hard,” said Red Raiders’ coach Don Vaughan. “Both of us were looking for something to jumpstart our seasons and get us going.”

Colgate got the game going Friday night when it struck first on a goal from sophomore forward Robbie Bourdon just under eight minutes into the game.

But before the announcer had even finished the Red Raiders’ goal summary, the Crimson struck back.

Senior forward Michael Biega took possession after a battle for the puck and passed to sophomore teammate Connor Morrison, who redirected it just enough to put the puck into the slot.

Sophomore Danny Biega was there to knock in a shot that sailed past the Colgate goaltender, tying up the score within 13 seconds of the Red Raiders’ first goal.

After the quick shift in momentum, Harvard capitalized again before the end of the frame.

Freshman John Caldwell got the puck out of the Crimson’s defensive zone to sophomore teammate Marshall Everson, who skated to the other end of the ice before dropping a tricky pass back through the Colgate defense to sophomore Alex Fallstrom. Fallstrom put it in for Harvard’s first lead of the game, as he and Caldwell both registered their first points of the season.

After the break, things didn’t change, and the Crimson’s offense kept the pressure on the Red Raiders. After a Colgate forward was called for holding midway through the second period, Harvard got its first power play opportunity of the night.

The Red Raiders appeared to be controlling the play—even with a man down— but Crimson junior Alex Killorn got the puck out to Danny Biega, who exchanged a few passes with captain Chris Huxley before getting a shot off from the blue line.

“To be honest, I don’t even think the goalie saw it,” Biega said of his second goal. “The power play was moving around really well...and we had a really good screen in front of the net.”

Converting on the man-up opportunity was one thing that Harvard’s coach noted as an instrumental change in getting the victory.

“I think the same things that were costing us games were flipped around to win a game [on Friday],” Donato said.

Colgate switched up its goalies in hopes of putting a stop to the Crimson’s scoring spree, but Killorn, Harvard’s leading scorer, wouldn’t relent, putting in a tricky shot for Harvard’s fourth unanswered goal of the game to make it 4-1 just before the close of the second period.

The Red Raiders were clearly feeling the heat as they entered the final frame with a three-goal deficit.

About a minute in, Colgate senior forward Francois Brisebois found the back of the net, getting the puck past Harvard’s senior goaltender Ryan Carroll.

The Red Raiders seemed to be picking up the pace, but a strong defensive effort by Carroll and the rest of the Harvard defense allowed the Crimson to keep its comfortable lead.

“[Carroll] gave us a calming effect and made some big saves,” Donato said of the netminder who had 27 saves on the night. “I think he does such a great job being relaxed in there...[and] it plays into how the team plays in front of him as far as being composed in our own zone.”

As time wound down, Colgate pulled its goalie with a few minutes left, and Harvard did not waste the opportunity. Morrison scored first on the open net, and after a late charging penalty on the Red Raiders, Danny Biega sealed his hat trick with a goal from behind the Crimson’s own blue line.

“We got a lead and we couldn’t hold it for more than 20 seconds, and then we gave up two goals in the last two minutes of the first and second period,” the Red Raiders’ coach said. “Those are backbreakers.”

Donato and Danny Biega agreed that just a few moments were enough to determine the outcome of the game.

“Unfortunately for Colgate, I thought they looked a little bit like us when we’ve lost games—where they’ve worked hard or they had great chances, and then the puck just comes down to the other end and goes in the net,” Donato said.

“Last weekend we played hard, we played really well, but we just didn’t get the bounces,” Biega added. “You know, every game there’s some luck involved, and the puck just seemed to fly in the back of the net for us tonight.

—Staff writer Madeleine Smith can be reached at smith21@college.harvard.edu.