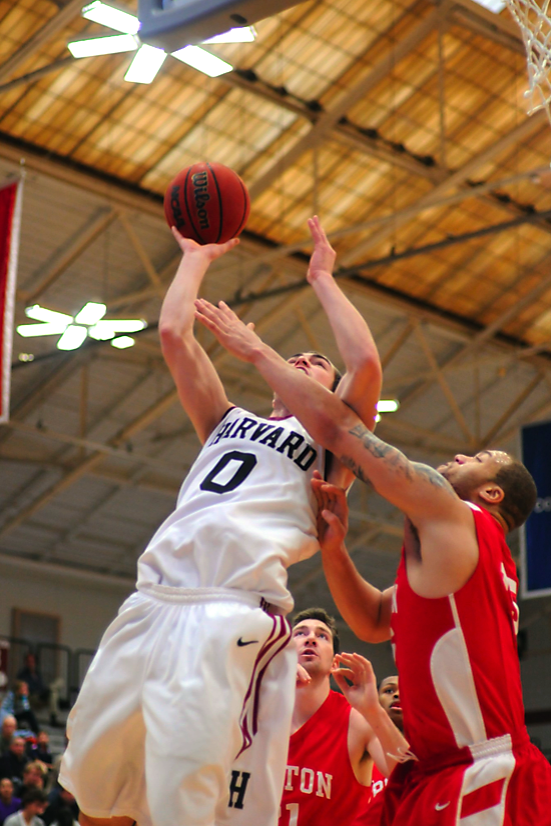 Once is a mistake. Twice is a coincidence. But three times is a pattern.

“[The Eagles] have been as good as anybody this early in the season,” Harvard coach Tommy Amaker said. “To beat a team playing that well right now on their home floor is pretty special for us.”

Boston College fans thought that the Crimson’s recent success against the Eagles might come to an end with the graduation of Jeremy Lin ’10, but freshman forward Laurent Rivard picked up right where Lin left off.

“He’s a confident player. He’s fearless,” Amaker said. “You see that side to this kid. At the freshman level, it’s unusual—strength, confidence, but then that fearless part of him. He’s not afraid to take a big shot.”

Though he shot just two-for-seven from the field in the first half, Rivard scored 11 of his career-high 23 points in the opening frame by getting to the free throw line. The freshman, whose 97.2 free throw percentage is second-best in the nation, went six-for-six from the line over a nine-minute stretch in which he scored 11 of Harvard’s 16 points.

This scoring outburst coupled with tighter defense, and the Eagles saw a nine-point lead with 10:01 remaining in the opening half turn into a four-point deficit by halftime.

“We stayed with our game plan. We were confident in what we needed to do,” Amaker said. “I thought we got tougher defensively.”

Coming out of the break with a 33-29 lead, the Crimson did not miss a beat.

Again Rivard made plays in critical situations. Protecting a three-point lead with the shot clock winding down roughly six minutes into the half, Rivard hit a turn-around jump shot from the free throw line. Midway through the frame, the freshman hit a pair of threes in the span of 1:27 to keep Harvard’s lead above nine points.

The closest Boston College came to taking the lead came with 12:26 left in the game after forward Joe Trapani scored on a cut to the hoop to narrow the margin to 45-44.

But junior co-captain Keith Wright responded on the other end with an identical move. The Crimson’s big man, however, finished with a two-handed jam and drew a foul, silencing the crowd. He hit the ensuing free throw.

But the night belonged to Rivard, and it was the freshman who put the nail in the coffin. After a pair of turnovers in the backcourt shrunk the lead from 70-59 to 70-65 with under two minutes remaining, the Crimson needed a bucket to stop the run.

With the shot clock ticking down, Wright received the ball in the high post and found Rivard on a weak-side cut for an easy layup. With 23 points, the forward led Harvard in scoring for the third consecutive game.

“My teammates trust me,” Rivard said. “My teammates—especially Brandyn and Oliver—are really doing a good job penetrating and kicking out, and they’ve made it pretty easy for me.”

Free throws iced the game for the Crimson—it hit 23 of 24 from the stripe overall—and Harvard closed out a convincing 78-69 victory.

Although the Eagles shot 50.9 percent from the field and 38.9 percent from three, the Crimson managed to limit the Eagles’ high-powered offense by forcing turnovers (14), limiting second-chance points (six), and keeping the home team off the free throw line (four makes on eight attempts).

“I was really pleased with our defensive effort,” Amaker said. “We had to defend outside the three point line. They’re so dangerous out there. I thought we did a tremendous job of finding the shooters and contesting shots.”

The Eagles were Harvard’s penultimate non-conference opponent. The Crimson opens its conference schedule at Dartmouth on Saturday before traveling to George Washington the following weekend for the final of non-conference matchup.

“We’ve beaten some good teams…the first couple years [I’ve been here], but I think we’ve been complacent after that, especially going into Ivy League play,” McNally said. “We don’t have the non-conference wins to get into the Tournament. We know that we’ve got to win the Ivy League…[This win] makes us feel good about ourselves: we’ve got to internalize that. But then tomorrow, we’re right back to work because we’ve got [Dartmouth] this weekend.”